She typed up Schindler’s list — and, in so doing, showed how a secretary could become a hero 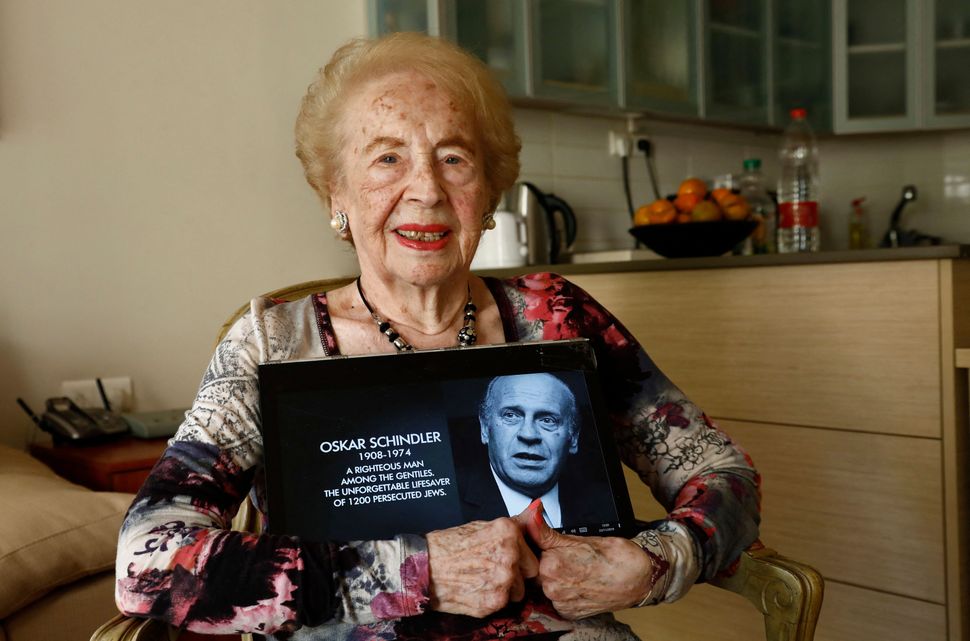 Mimi Reinhardt, who died April 8 at age 107, proved that administrative assistants can be powerful forces for good or evil, depending on their own personal qualities.

As Austrian Jewish secretary to the German industrialist Oskar Schindler, she typed clean copies of the celebrated list of around 1200 Jews who were claimed as essential workers for the Nazi war effort in Schindler’s employ, thereby saving them from the death camps.

These preliminary lists, which would later inspire a novel by Thomas Keneally, filmed with historical distortions by Steven Spielberg, were compiled and first typed by Mieczysław (Mietek) Pemper.

Pemper labored at the Płaszów concentration camp in a southern suburb of Kraków, as personal secretary and stenographer to Amon Göth, a murderous camp commandant who would later be executed for war crimes.

When Pemper persuaded Schindler to alter his factory from producing ceramics to weaponry to preserve the lives of Jewish workers who would otherwise be deported, Reinhardt was assigned the task of typing a presentable list.

Later she modestly demurred that she merely followed orders, in a refreshing variant on the perennial excuse of wartime malefactors. Yet she took the initiative of adding her own name, as well as those of two of her friends, to the list, saving their lives. Some Jews were uncomfortable with being included on Schindler’s list, as he was seen as a disreputable Nazi spy who socialized with, and bribed, SS officials.

However, Reinhardt, although she disclaimed any definitive insight into Schindler’s motivations, felt that even if he initially hired Jewish refugees because they accepted lower wages than other job applicants, he was eventually sickened by the violence of the Holocaust and tried to preserve as many lives as possible.

Anyway, Reinhardt told Reuters in 2007, Schindler “didn’t treat Jewish employees as inferior people; he treated us like as if we were equivalent to him and at that time,” she said, “we had very low self-esteem.”

Reinhardt, born Carmen Koppel in Vienna, was no virtuoso typist. Indeed, she claimed to type with only two fingers, but was a trained stenographer. Her Orthodox parents, coproprietors of Koppel & Stenzel, a grocery and general store located at Hauptplatz 22 in Vienna, had insisted that she learn a practical job skill.

Following their edict, she studied stenography, to be able to take lecture notes in shorthand after enrolling at the University of Vienna to major in languages and literature.

Shorthand, and her fluent mastery of the German language, made her a valuable asset at Kraków-Płaszów forced labor camp. On Schindler’s list she entered her married name, Carmen Weitmann, alongside the professional category of Secretarial Work (Schreibkraft).

Decades later, safely ensconced on West 72nd street in Manhattan, she was invited to the December 1993 New York premiere of Spielberg’s “Schindler’s List,” which she attended but left before the film was screened, finding it too difficult to revisit memories of that era. These included imprisonment for a few weeks in Auschwitz, which she later succinctly described as “Dante’s Inferno.”

There was plenty more to avoid recalling, as she informed Haaretz in 2007, citing an occasion when a Nazi SS officer entered the Płaszów concentration camp office and told her supervisor “about a very unpleasant experience — he had had to shoot a small child. He had told him to strip off his clothes, but the boy answered that his mother would be very angry at him if he took off his clothes in the middle of winter, because he would catch a cold. The officer related that he did not want to damage the clothing, because at that time they were sending the clothes to Germany. In the end, he stripped the child and shot him, and he said this was most unpleasant, because he, too, had a child of that age at home.”

When she finally saw Spielberg’s movie years later, Reinhardt found that she was unable to identify with the Jewish prisoners seen onscreen, as the extras were “too well dressed.”

Over a half-century in New York, she downplayed her role in the Schindler saga, and only when making aliyah at age 92 to live close to her son and his family, did she inform Israeli immigration authorities about her connection to historical events.

Settling into a comfortable retirement home, Seven Stars Residence on Yitzhak Ben-Zvi Road in Herzliya Pituach, outside Tel Aviv, she became something of a media darling.

Resourceful as ever, she studied Hebrew to better assimilate into her new surroundings. Unlike other Jews saved by Schindler, Reinhardt made few if any efforts to lionize her benefactor until her extreme old age. But Leopold (Poldek) Pfefferberg, another Schindler employee, tried but failed to persuade the director Fritz Lang, master of film noir, to adapt Schindler’s story, which possibly might have resulted in better cinematic artistry than Spielberg’s conventional tear-jerker.

Pfefferberg later convinced Thomas Keneally to write his novel and exploited an acquaintance with Spielberg’s mother to phone her son’s office once weekly for 11 years, or so he claimed, to noodge the director of “Jaws” to accept the project.

By contrast, Reinhardt just got on with her life, but was inevitably caught up in an increasing trend to focus attention on supernumeraries of the Holocaust, as main players on both sides gradually died.

Currently, a trial is underway in Itzehoe, in northern Germany, scheduled to continue until June. In a juvenile court, 96-year-old Irmgard Furchner, onetime teenaged secretary at Stutthof concentration camp, is charged with aiding and abetting the murder of over 11,000 prisoners.

Furchner denies culpability, despite having typed deportation and execution commands at the camp commander’s request and initialing each message herself.

Other secretarial misdeeds and ambiguities are fictionalized in the film, “A German Life,” out later this year, in which Maggie Smith plays the role of Brunhilde Pomsel, Nazi Propaganda Minister Joseph Goebbels’ secretary. Filmed by a documentarian at age 102, the real-life Pomsel was also evasive, denying personal guilt and claiming that Jews were never mentioned in her office.

In the original 2019 play starring Maggie Smith, London audiences reportedly chortled at the recollections of Goebbels’ secretary, possibly confusing them with caustic putdowns from the Dowager Duchess of Grantham in TV’s “Downtown Abbey,” also incarnated by the same actress.

Among Hitler’s secretaries, a few expressed regret, like Traudl Junge, while others remained unrepentant, like Johanna Wolf and Gerda Christian.

However, as if to restore faith in administrative assistants, Miep Gies, hired in 1933 as secretary to Otto Frank, hid him and his family in Amsterdam and later preserved Anne Frank’s writings. And the undercelebrated Igor Newerly, a Polish novelist, worked as secretary starting in the 1920s for the Polish Jewish educator Janusz Korczak, who stayed with his orphans when his entire educational institution was sent to their deaths at Treblinka extermination camp.

She typed up Schindler’s list — and, in so doing, showed how a secretary could become a hero