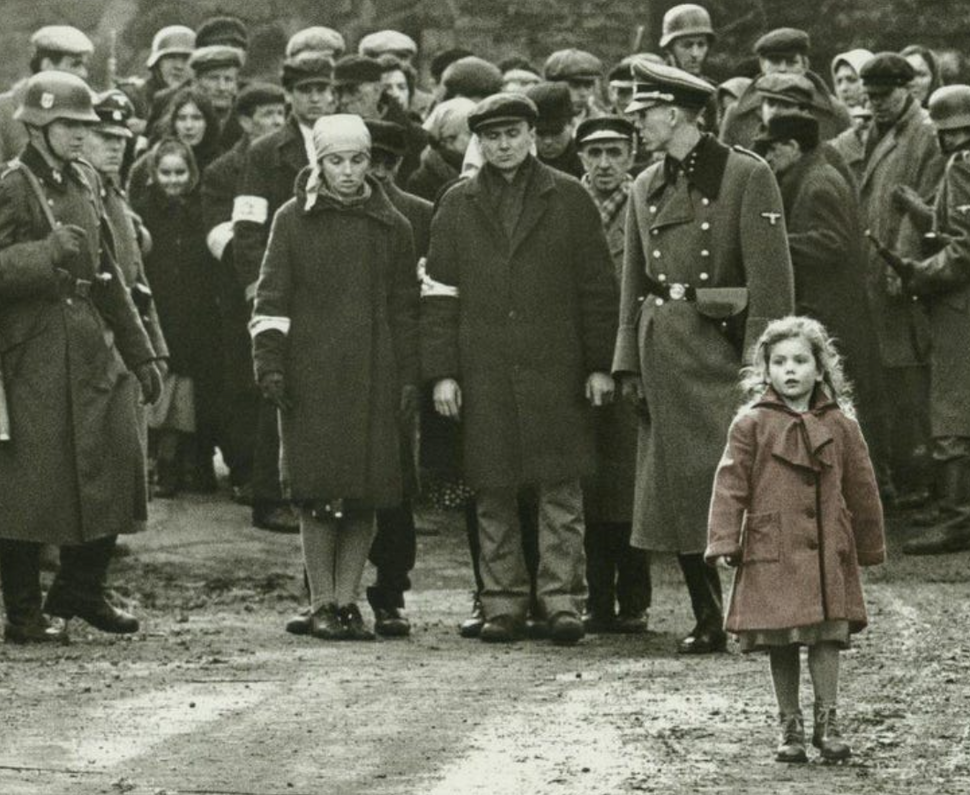 The Protectorate of Bohemia and Moravia, 1945. Luminous black and white. John Williams score. Germany has just surrendered to the allies. Despite having transformed a mandated slave camp into a haven for over a thousand Jewish men, women and children, our hero Oskar Schindler still has to flee to avoid potential capture and prosecution as a war criminal.

The prisoners, now officially liberated from his employ, stand respectfully under the night sky as he walks toward his car. They give him an engraved ring and a letter as farewell, and the letter details his remarkable acts of solidarity, hoping that this will provide safe passage.

And then, ‘cause it’s the end of Act 3, Oskar Schindler breaks down.

“If only I’d made more money,” he laments to the Jews. “If only I’d spent less money!” Desperately, Oskar calculates how many more lives he could have bought if he’d sold his car, his jewelry. He breaks down sobbing, and the Jews rush to embrace and comfort him en masse.

Yeah, it’s cheesy, but by now you’re crying so hard that it’s hard to think critically, particularly because that scene concludes a film that has been for the most part beautifully crafted, devastating in its portrayal of Nazi crimes against humanity, and based on the very true story of Right Action at a time when Right Action was as scarce as bread.

On the other hand, since so much of “Schindler’s List” derives its moral authority from being based on a true story (and specifically Thomas Keneally’s “Schindler’s Ark,” the accuracy of which has also been contested), it’s worth noting that Oskar Schindler didn’t actually make that speech.

In Keneally’s telling, many of the events of that night did happen. Schindler had a letter with him, but both he and the prisoners had way too much going on for niceties.The Jews were afraid of getting killed by locals, and Oskar was understandably stressed because it was a bad night for car trouble.

Which makes the fictionalized lines feel superfluous, especially since they read like an almost comical ode to aspirational American capitalism, a speech only Jeff Bezos could love. Schindler’s great glory: Making money. His great sin: A failure to adopt austerity. It’s also pretty Christian, what with the solemn holy man and his flock and that crazy, pieta-style weepy group hug. And that’s weird, right, for a movie that’s supposed to be about Jews?

Which leads to the the whole goyishe vibe in general, the fact that somehow the world’s most famous, most paradigmatic movie about our own damn genocide features Good Nazi and Bad Nazi as its main characters – both of them played by two of the most Teutonically beautiful, Riefenstahlian fever dreams of ice blue eyes, strong chins and sharp cheekbones that have ever walked onto a Spielberg set. Which is both saying a lot, and, given the subject, sort of creepy.

The Nazis get the A plot, the great dramatic scenes, and all the pretty girls – who are usually Jewish. And imprisoned. And either naked or wearing flimsy nightgowns, which is also sort of creepy.

And the Jews, what do we get? A composite.

Ben Kingsley plays Itzkhak Stern, a character based on three of Schindler’s Jewish collaborators in Krakow, all mushed together into one glum accountant who really just serves first as Unwoke Schindler’s conscience, and then as a devoted administrator of Woke Schindler’s vision. It’s not much of an arc.

You can’t really blame Spielberg for this; he was just doing his job. And Steven Zaillian’s script is a master class in adaptation and adherence to the Hollywood Hero’s Journey screenwriting blueprint, according to which you need one central protagonist who, you guessed it, takes a moral, emotional and physical journey. Everyone else – antagonist, love interest, sidekick – are all just there to act as foils, or to propel him on that journey. So Stern may not have much depth as a character, but he functions perfectly as Itzhak Stern.

“Functions perfectly” and “just doing his job” are not the greatest language for a movie about the war crimes of the Third Reich. Given the special circumstances of the Shoah, we as audience members may have the right to ask for a bit more. And since Spielberg himself insists that he was never looking to make a hit movie but rather to fulfill a moral imperative, it does seem fair to ask whether there’s a relationship between what he and Zaillian left out, and where that leaves us.

Here are just a few bits from the book that never made it into the movie.

• In his very first meeting with the man who would be one-third of the film’s composite Jew, Oskar voiced his disgust with Nazi behavior in Krakow, thereby signaling that he might be an ally. He knew the stakes. He’d already begun to take a side.

• Schindler didn’t singlehandedly bully Jewish business leaders into investing in his company; he actually teamed up with Jewish businessmen to garner support and investment from within the community right away. It was always a joint effort.

• When it became obvious that bribing Goeth would be the only way to save “his” Jews from the gas by getting them out of a camp that was on the verge of being liquidated, it was a man named Marcel Goldberg who actually made the list. Goldberg – himself no saint – most likely played favorites and took bribes to include certain people and leave others out.

• Schindler was not absent from the list-making entirely out of negligence: He was under arrest. (Which is another curious omission. The man risked his life and freedom, consistently, for years and was arrested three times. He only got out because of the support of his own vast network of allies and accomplices.).

• At the behest of his contacts, Schindler also briefed Zionist intelligence agencies from Palestine about the Final Solution. Since shots of a guy in a hotel room telling people a sad story about offscreen events that haven’t taken place yet wouldn’t make for good onscreen drama, Oskar’s work as witness and agent goes largely unremembered.

These and other excised details paint a picture of a world in which Schindler, significantly, was never on anything resembling a hero’s journey. He was a node within an active underground in which many gentiles with a whole range of motivations collaborated with many Jews to save lives and undermine Nazi authority, usually against what must have felt like impossible odds. The Jews in particular sought Schindler out regularly, knowing of his reputation for being a man whose factory might supply shelter from deportation and death. They did so not as supplicants; they were nobody’s flock.

Spielberg’s Hollywood-sanctioned emphasis on the individual at the expense of the community, as well as his erasure of Jewish agency, is troubling. Especially today, when an overemphasis on “individual responsibility” continually subverts attempts to find collective solutions for our troubles.

Our familiar troubles, that is. Oskar Schindler knew how to spot a trend, and he’d likely recognize some of 2021’s uglier portents: forced family separation, reports of slave labor on American soil, the documented existence of death camps just south of our border, and a complete abandonment of laws regarding the rights of refugees throughout Europe, Latin America and the U.S. He probably wouldn’t have needed to turn to Hannah Arendt either, in order to notice the 21st century’s familiar assault on truth, renewed interest in eugenics, resurgence of nationalist language, or the lack of consequences for armed state forces enacting mortal violence on unarmed populations.

And what does Spielberg’s film have to offer us, in terms of grappling with these troubles? For all his talk about education and urgency and messages for the world, the movie is basically a fairy tale with documentary trappings. Where in “Schindler’s List” can a normal human being connect? With the hero? With the villain? I, for one, am no canny salesman. I don’t have enough money to buy the liberty of even one prisoner, let alone 1,000, and I can’t hold my liquor. On the other hand, I’ve never sexually tortured a woman in my basement. So that’s good.

I can’t be Schindler. I’m no Goeth. I sure don’t want another go at being Stern. So I guess I’m off the hook?

But no one’s gonna engrave “you’re off the hook” on a ring.

And we are most definitely on the hook, especially if we take the promise of Never Again seriously. The fact that we can’t do anything on our own in the fight for Never Again is no excuse for not doing anything at all, and if we’re going to come together we’re going to need new stories that go beyond the Hero’s Journey.

Some enterprising director should take it on. Maybe they could start with a new story for Oskar Schindler, whose example was both so much smaller and so much bigger than his blockbuster legacy.

Sheerly Avni is a writer and producer living in Mexico City. She swears she’s no Spielberg hater. She saw “E.T.” 14 times, and still has all the “Raiders” picture books.