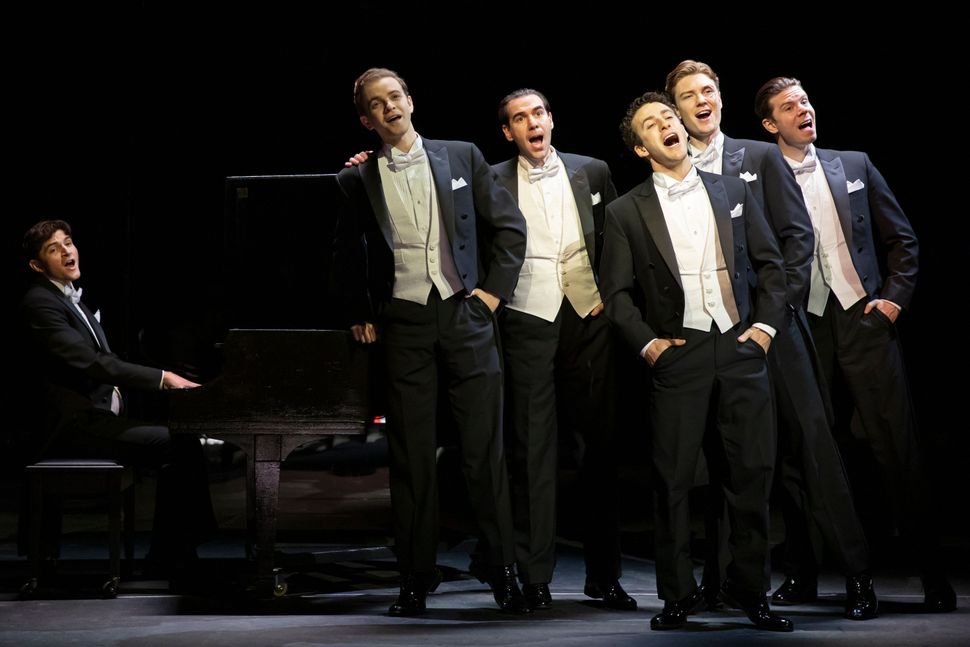 If “Memory” wasn’t already a marquee name in showtunes, Barry Manilow probably would have used the title for a song in his new musical.

Now playing at the Museum of Jewish Heritage, “Harmony,” about the Comedian Harmonists, a sextet of German singer-comedians, is also all about memory – both history’s short recall for a popular act erased by the Nazis, and the enduring guilt of the group’s last surviving member.

A pre-show banner, bearing a cartoon of our entertainers, gives us the date Dec. 16, 1933, the evening the Harmonists played Carnegie Hall. We open on a memory of that night, recalled decades later by our narrator, Rabbi (Chip Zien). But Carnegie Hall was a high point, and Rabbi’s here to tell you why it didn’t last, and, more to the point, why you’ve never heard of the Comedians, a story that involves some tragic lows.

Rabbi – whose real name was Josef Roman Cycowski, and who enrolled in seminary in his native Poland before deciding “it would be nice to sing in a major key for once” – takes us back to where it all began for the Harmonists: Berlin, 1927. From there, the show, dotted with inventive vaudeville performances that range from a marionette satire of the Third Reich to a waiter-themed burlesque, charts the group’s success and ultimate unraveling in the wake of the Nuremberg Laws that targeted its three Jewish members. 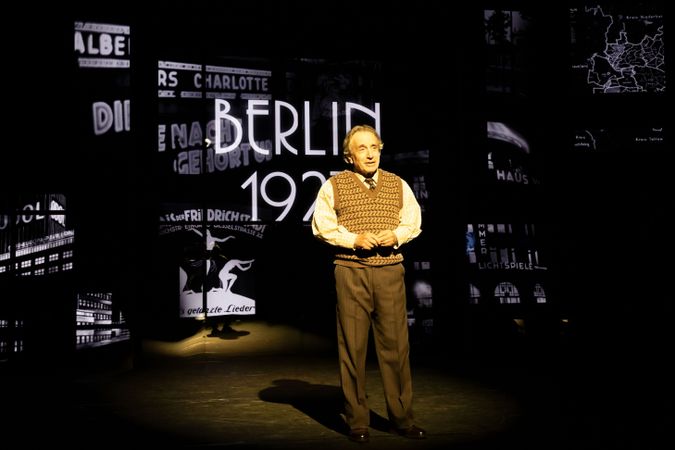 Chip Zien, as the older Rabbi, winds back the clock. Photo by JULIETA CERVANTES

A moment to jog our own memory. It’s something of a misnomer to call “Harmony” a “new musical.” Barry Manilow – here the man who wrote the songs and arranged them – and Bruce Sussman, his regular lyricist and now librettist, have been working on a musical about the Comedian Harmonists for about 25 years, over three times as long as the Harmonists were active. The result of this long process is a show that, directed and choreographed by Warren Carlyle, is highly polished in parts and ragged in others. It’s pretty easy to tell which bits have been tempered by time and which are new and need refinement.

The highlights are the Harmonists’ group numbers, both their kinetic formation and their cabaret antics as a rising troupe. The six men – Harry, the ringleader (Zal Owen); Young Rabbi (Danny Kornfeld); Erich (Eric Peters), a would-be doctor with an endless supply of famous family friends; piano player Chopin (Blake Roman); opera buffa bass Bobby (Sean Bell); and handsome Bulgarian Lesh (Steven Telsey) – are phenomenal in their harmonies, synchronized in their movements and impeccable with their comic timing.

Both Sussman’s lyrics and Manilow’s score shine in the interwar idiom of swoony movie musical love songs and jazz-inflected comedy. Manilow penned a Liszt pastiche and a Josephine Baker mambo, and with Carlyle’s choreo, they work like gangbusters. 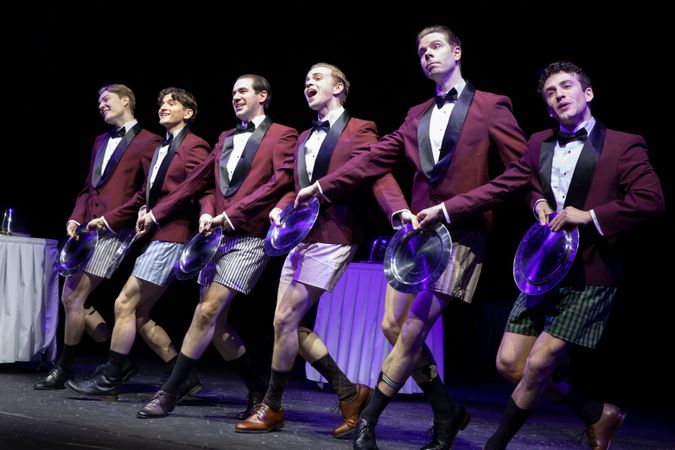 The Harmonists (Eric Peters, Blake Roman, Zal Owen, Steven Telsey, Sen Bell and Danny Kornfeld) cut their comedic teeth in the number “How Can I Serve You, Madam?” Photo by Julieta Cervantes

Strangely, this consummate pair of soft pop writers largely fall down with their ballads, which factor into the romantic plot, between Rabbi and his love interest, Mary (Sierra Boggess) and Chopin and his firebrand squeeze, Ruth (Jessie Davidson, an unconvincing composite character). Ruth and Mary, whose struggles come from marrying a gentile and a Jew respectively, turn the corner somewhat in a duet called “Where You Go,” inspired by lines from the Book of Ruth and the rare sequence that taps the full storytelling potential of the stage.

When “Harmony” tries to do politics and context – a ham-fisted parade of twirling red flags during a Communist rally in a number gutsily called “This Is Our Time” (Sondheim is spinning) – it feels excessive and out of nowhere. This time could be better spent showing how exactly the Comedians went from covering boxers with cloches – a sort of Weimar-era “Dick in a Box” – at a German club to headlining Carnegie Hall, a step we somehow miss.

Dealing with Rabbi’s regrets, in songs called “Threnody,” the show flounders with a weird pseudo-recitative, as poor Chip Zien, virtuosically shouldering this clumsy material, recalls pivotal exchanges tied to the group’s undoing. He flagellates himself unduly, and also sings the Shema, in the most explicitly Jewish content one has ever seen from Barry Manilow.

At times the Jewishness – references to pastrami, chopped liver, lyrics like “Where I grew up the people threw/A Pogrom every month or two” or that rhyme “shtetl” and “settle” – panders a bit too hard. Historical cameos from Einstein and Marlene Dietrich (the names in the playbill are decoys, the overworked Zien plays almost all of them) are far too “Jersey Boys” in their cuteness. 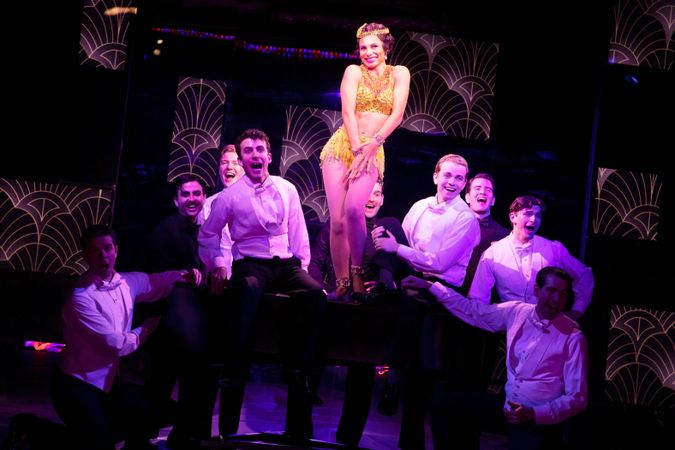 The boys with Josephine Baker (the phenomenal Ana Hoffman). Photo by JULIETA CERVANTES

But there are moments, no doubt helped along by Beowulf Boritt’s mirror-wall set, that recall some of the better parts of “Cabaret.”

The second act crackdown on the group, in the person of an Oberstumfuhrer played by Zak Edwards, plays well, particularly when followed by the number “Come to the Fatherland.” In that ditty the boys, appalled at being referred to as “ambassadors” for the Reich, string themselves up like puppets and sing a scathing tourism ad while performing in Copenhagen. If Sussman’s lyrics aren’t quite Fred Ebb-level (“If you’re good at tushie-kissin’/or maybe you’re missin’ a screw/come to the Fatherland! Unless you’re a Jew,”) they seem right for the boys who alternated between appearing in tails and in their underwear.

What sells the song, and much of the drama that follows, is the same element that made the Comedian Harmonists a success. The chemistry of the six actors together can weather creaky dialogue or awkward dramatic beats. When they sing as one, you feel the loss of these men’s chapter in history. The strained metaphor of an interfaith act, joining in music before the dissonance of a regime that thrived on both conformity and division, becomes vivid.

The group’s talent as a unit is the true magic of the show, and what you’ll remember when you leave the theater – long after you’ve forgotten the melodies.

Harmony opens at the New York Theatre Folksbiene’s Edmond J. Safra Hall at the Museum of Jewish Heritage April 14. Tickets and information can be found here.