In savaging the Israeli military, has a legendary puppet theater finally gone too far?

For even some longtime supporters, the politics at Bread and Puppet Theater have gotten too strident 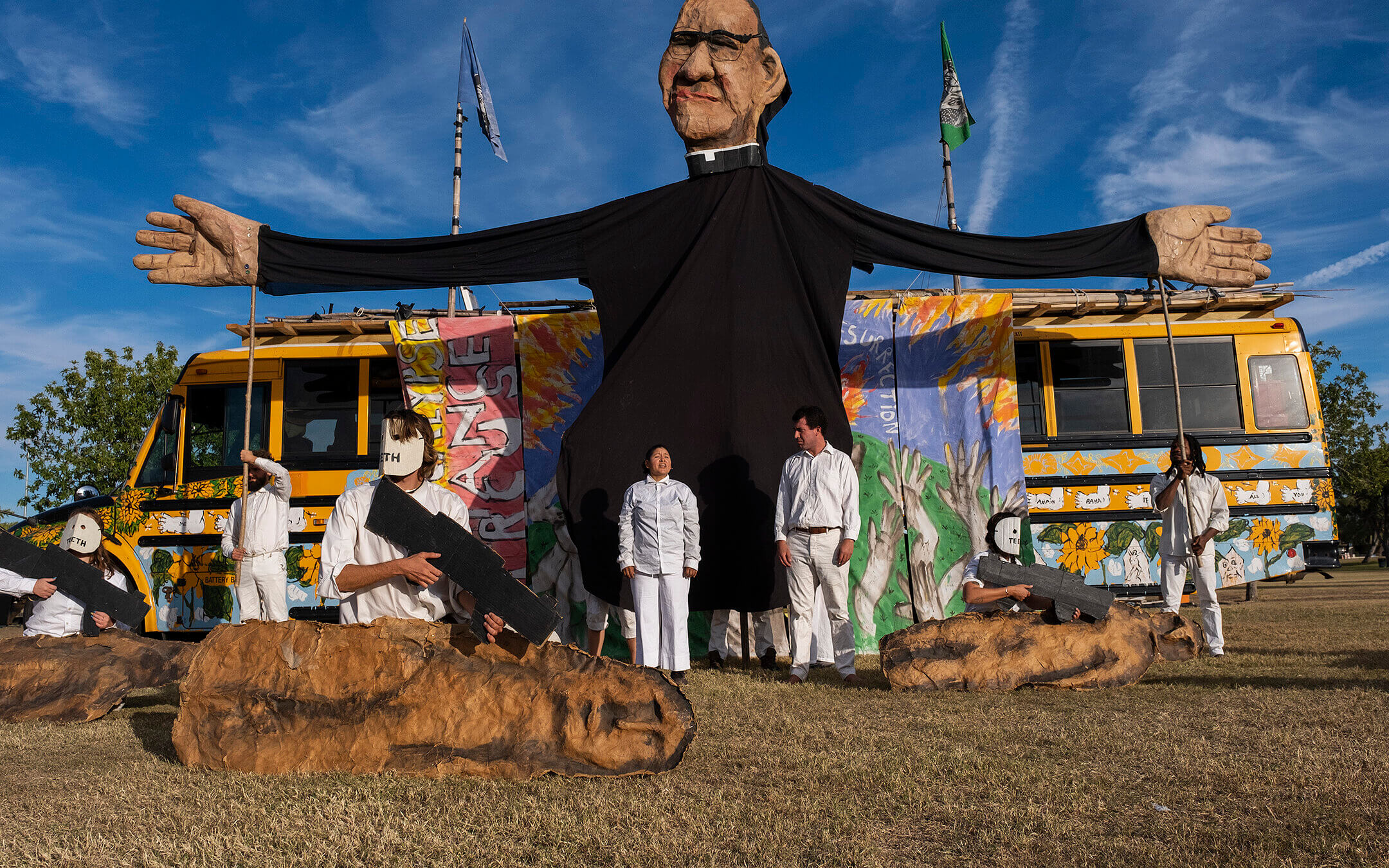 Bread and Puppet is a decidedly anti-war, anti-capitalist troupe, which has performed shows about atrocities in Vietnam, Central America, Bosnia, Afghanistan and Iraq. In this photo, a puppet portrays the late Salvadoran archbishop Oscar Romero during a performance of the ‘Apocalypse Defiance Circus,’ 2022. Photo by Garrett MacLean

Issues come and go at the 250-acre Bread and Puppet Theater farm in Glover, Vermont. But for the past 20 years, the plight of Palestinians has been a continuing focus for the decidedly anti-war, anti-capitalist troupe, which has performed shows about atrocities in Vietnam, Central America, Bosnia, Afghanistan and Iraq. In addition to being Bread and Puppet’s founder and director, 88 year-old Peter Schumann, widely considered a genius in the theater world, is also a prolific painter who reportedly finishes a painting or two a day on old, donated motel bed sheets. Some of his paintings confront the Israeli occupation of the West Bank.

On Dec. 18, the cross-country fall tour of Bread and Puppet’s Apocalypse Defiance Circus concluded at the Theater for the New City in Manhattan’s East Village with a five-minute circus act which recited statistics about civilian casualties resulting from Israeli bombings in Gaza yet made no mention of the thousands of Ukrainians who had also been killed or injured in the last year. Nor did Bread and Puppet’s show offer any clue that Israel had been responding to Palestinian missile attacks. As a puppeteer held a sign that read, “Palestinians say,” performers declared “Palestine must be free from the river to the sea.”

“Almost every show, somebody would walk out and in a couple of shows people shouted out things,” said Josh Krugman, coordinator of the theater’s fall tour and the author of the act on Gaza casualties. “It made me feel that the act was strong.”

For his part, Schumann scoffed at the suggestion that the circus act oversimplified the tragedy taking place in Gaza.

“I don’t find it so simplistic,” said Schumann, who still speaks with a thick German accent after more than 60 years in the U.S. “These homemade instruments that are being fired [by the Palestinians] don’t compare to the billion-dollar Israeli army activity. They’re deplorable but they’re definitely beyond the scope of what Israel is doing. It is simplistic to compare those two. [As] if one is a war in reaction to another war. It’s not.”

Schumann may think the bombs from Gaza, or the “home-made instruments” as he calls them, are deplorable, but their role in the conflict doesn’t make it into the show. Bread and Puppet’s take on the security wall in Israel similarly ignores the impact it has had on suicide bombings.

“After Israel withdrew from Gaza in 2005, the terrorist group Hamas took over the territory and used it to launch thousands of rockets and missiles at Israeli homes and families,” Rothstein said. “This has led to horrific wars between Israel and terrorists in Gaza, causing great harm to civilians on both sides. Innocent Palestinians have suffered most because Hamas builds military infrastructure, hides weapons, and launches attacks from civilian areas in Gaza.”

Schumann visited the occupied territories twice in the last 20 years, according to Krugman. In November 2006 he led a nine-day puppet workshop in the West Bank town of Beit Sahour, which inspired a series of his paintings that paired Palestinian stories with images of the Warsaw Ghetto. “I’m not saying that what’s happening in Palestine is the same as what happened in Warsaw, but it’s certainly a reminder,” Schumann told the Vermont weekly Seven Days in 2007.

Ian Thal, a playwright and theater critic who estimates that he was in three dozen Bread and Puppet shows in the Boston area between 2003 and 2006, decided to publicly sever his ties with the theater troupe during a rehearsal for a February 2007 performance of The Battle of the Terrorists and the Horrorists. Thal initially thought that the show was going to be a satire about the George W. Bush administration’s “War on Terror,” but in rehearsals, American soldiers became members of the IDF. A wall closes in on Palestinian women in the show.

“We were directed first to mime throwing rocks at the wall and then to mime tearing the wall down,” Thal wrote on his blog, adding that he thought that the show’s representation of the wall was simplistic and misleading.

Bread and Puppet has devoted numerous productions to the issue of the Israeli occupation. A 2004 show focused on Rachel Corrie, the American peace activist who was crushed to death by an Israeli bulldozer while trying to stop the demolition of a Palestinian home in the Gaza Strip. A 2017 piece concerned the Palestinian poet Mahmoud Darwish.

And in summer 2022, a half-hour show titled The University of Majd claimed that 14 Palestinian prisoners had been executed by Israelis in Ramallah in 2002. The show, which was originally performed 20 years ago, told the story of a 19-year-old man named Majd Ziadeh who, the audience is informed, was taken into custody “for being male and Palestinian”; we later learn that Ziadeh was convicted of participating in a drive-by shooting, though not as the triggerman. A narrator quotes Ziadeh at his sentencing saying that he has a right to resist the occupation.

The execution allegation was based largely on emails sent by Ed Mast, a Seattle-based playwright and activist, and his partner Linda Bevis.

Asked if he confirmed the execution claim with a source other than Mast, Schumann initially told me, “I don’t remember that,” then quickly added, “I’m pretty sure I did.”

Al-Haq, the Palestinian human rights group based in Ramallah, said it was unable to access its database to confirm the execution claim but was aware of Majd Ziadeh’s incarceration.

Schumann said that Mast has delivered his Palestine for Beginners talk at Bread and Puppet’s farm frequently in recent years. In his lecture, Mast discusses the Six-Day War and states that Israel conquered the West Bank and Gaza but makes no mention of the mobilization of Egyptian forces in the Sinai, Egypt’s blockade of the port city of Elat or the military involvement of Syria and Jordan in the war.

Howie Cantor, who has performed with Bread and Puppet for more than 40 years and serves on its advisory board, is not a fan of Mast’s lectures. “It leaves stuff out and presents opinion as fact,” he told me.

Cantor is a maple syrup producer who sometimes plays bass during Bread and Puppet’s summer shows. He caught part of a rehearsal for The University of Majd last summer. “I doubted it was true,” Cantor said of the show’s execution claims. “So, I just said to myself, ‘I’m just not even going to see this show.’”

Cantor is certainly willing to criticize the government in Israel. He helped create a sideshow in 1981 that he describes as sympathetic to the plight of Palestinians. But, after a visit to Israel while the war in Lebanon was under way, he abandoned his belief in pacifism and declined to perform in the sideshow when he got back to Vermont.

When he tried to discuss the idea that the theater was oversimplifying the Israeli-Palestinian conflict, he was met with ridicule “from people I love and respect.”

“These are my best friends in the world and I don’t want to have to talk to them about it. It’s a tiny part of our relationship,” he told me.

But now he watches the shows in rehearsals before deciding whether or not to perform with the band because he has concerns that the political content might not be something with which he would want to be associated.

In savaging the Israeli military, has a legendary puppet theater finally gone too far?