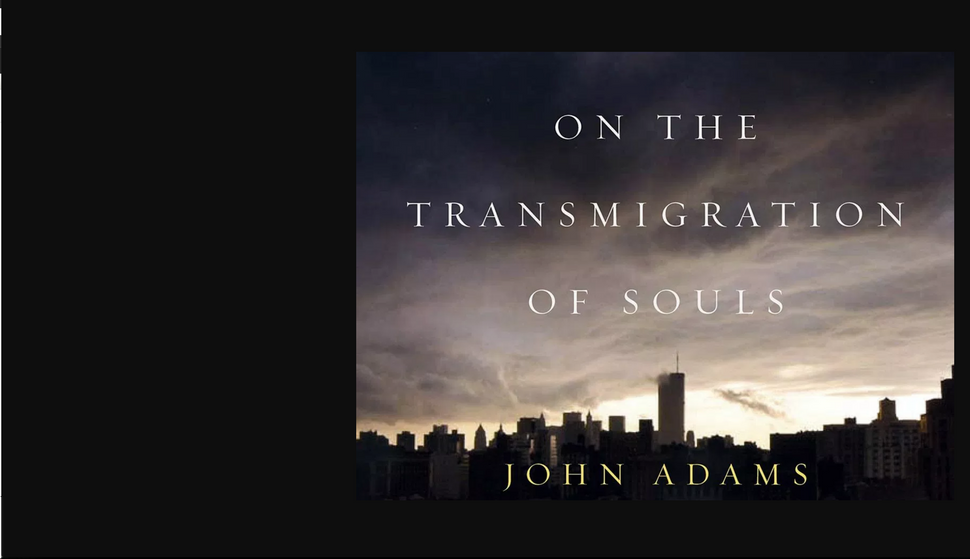 The arrival on record of an important new work is always welcome, but immense satisfaction is inevitably tinged by sadness with the CD release of John Adams’s “On the Transmigration of Souls,” a 25-minute work honoring the victims of the September 11 attacks. The piece was commissioned by the New York Philharmonic and had its premiere at Avery Fisher Hall on September 19, 2002, with Lorin Maazel leading the orchestra. That concert and three others shortly thereafter were recorded, and this album, on the Nonesuch label, comes from those tapes. Rightly, no other music is included on the CD; “Souls,” which won the 2003 Pulitzer Prize for music, stands alone.

Adams might at first seem an odd choice for this commission, as he’s generally associated with the West Coast, where he’s lived since the early 1970s. But he is by common consent America’s leading classical composer these days, and, as he pointed out in an interview with the Forward, one hardly need be a New Yorker to express strong feelings about the events of September 11.

“It was not a piece I intended to compose,” he said. “Nor did I even wish to write it. But when the request from the New York Philharmonic came through, I knew that I must accept the assignment, and that I must find a way to make a meaningful musical and poetic statement about the event.”

Adams has managed that remarkably well. Such a commission — composing a commemorative work for a national tragedy — is fraught with contradictions: Write too esoteric a piece, and you may alienate listeners; write too “accessible” a work, and you risk pandering. And that’s to say nothing of such a work’s long-term viability: Should a memorial work be more concerned with instant appeal or with timelessness?

One thing Adams said that he doesn’t worry about, even with the release of “Souls” on CD, is the work’s overexposure. “I expect it will be a piece more talked about than listened to,” he said. “In fact, it’s not an easy ‘listen.’”

Well, yes and no. Adams’s music occupies a special place in that vague, mutable and often hotly contested territory known as contemporary classical composition. Critics, at least in recent years, embrace his music warmly, and he enjoys popular appeal, relatively speaking. Like his best previous work, “Souls” is instantly comprehensible, written in a language that is harmonically sophisticated but inviting rather than exclusionary.

On the other hand, anyone with strong memories of the September 11 attacks will be unable to hear this piece without it evoking wrenching images. Indeed, Adams goes to great lengths to root this piece in “reality,” introducing via tape New York street sounds, a lachrymose recitation of names and short phrases taken from missing-persons posters, makeshift memorials near the World Trade Center site and The New York Times’s “Portraits of Grief” series. These words are spoken by a small group of Adams’s family and friends. The work’s other voices are singers, either Joseph Flummerfelt’s New York Choral Artists or the Brooklyn Youth Chorus, directed by Dianne Berkun.

That Adams can do this without “Souls” becoming maudlin is some feat. Just as impressive is the dexterity with which he integrates the words into his powerful score — mostly soothing, occasionally angry. No verbal description can do this complex work justice, but some detail might illustrate the achievement.

Adams hooks the listener immediately, opening not with music but with sounds of traffic, footsteps, barking dogs, a siren. Suddenly we hear the word “missing,” repeated relentlessly. When music does come, it’s from a chorus offering a gentle vocalise. Then the macabre roll call begins: John Florio, Christina Flannery, Lucy Fishman, Richard Fitzsimons, David Fodor, Helen D. Cook and so on, the names reiterated and overlaid. Soon a solo trumpet, an obvious homage to Charles Ives’s “Unanswered Question,” grabs our attention. As the instrument importunes, the chorus sings: “We love you,” “We miss you.”

Anger, of course, cannot be far off, and it comes with a convulsive instrumental explosion that obliterates notions of resignation or acceptance. But it dissipates quickly, leaving the sound of sirens and a resumption of the name reading. A children’s chorus heartbreakingly sings: “He was the apple of my father’s eye.” And as anger grows in the voices, an organ enters, bringing with it more musical calamity. Now the full force of the orchestra is deployed, with hurried figures in the strings suggesting panic.

But Adams returns us to the ethereal (high strings and judiciously employed percussion), as more names and phrases like “David Fontana, I love you” are intoned. (My own breaking point comes with the spare invocation of “my sister,” “my mother,” “my brother,” “my son”; I lose it right there each time I hear this disc.) Bravely — because it would have been easier to conclude on a note of anger, vengeance or victimization — Adams stops the voices with the words “I love you; I love you,” leaving just bells, chiming like those in a clock tower. As they ebb, the sound of traffic is heard once more, trailing into silence.

Adams, whose 1991 opera “The Death of Klinghoffer” (released on a Decca DVD earlier this year) has been dogged by accusations of antisemitism, said that this piece “doesn’t attempt to ask ‘Why?’” Instead, it firmly, and effectively, steers clear of politics, understandable in a piece that he called “perhaps the most intimate work I’ve ever composed.”

How this score plays in the concert hall is tough to gauge; the presence of a crowd allows for communal grieving, but the potential for distraction is manifold. At home, though, a listener can largely control his environment, almost guaranteeing a highly emotional encounter with this music, something for which Adams clearly hoped. Thus a piece intended as public catharsis might well find its purest expression with an audience of one.

David Mermelstein writes about music for The New York Times and other publications.