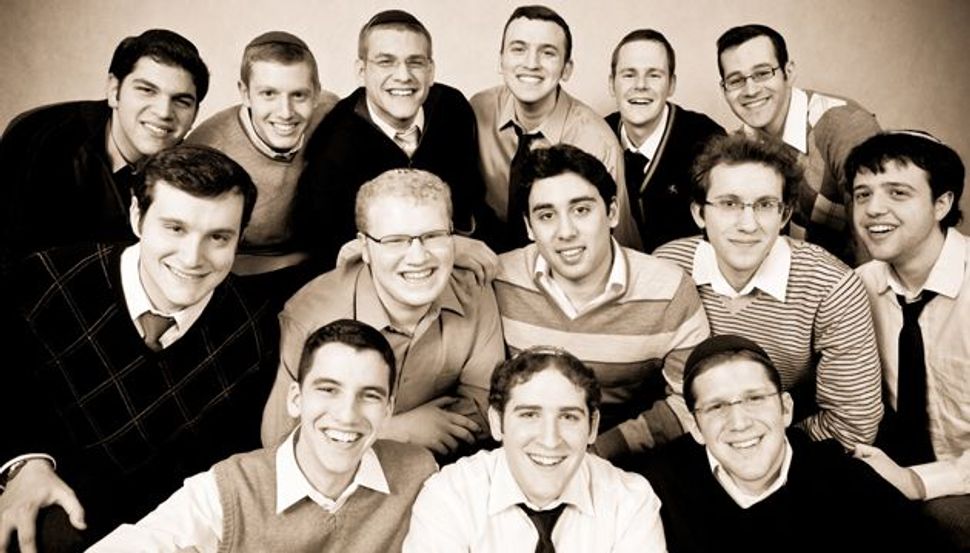 Stars: The Maccabeats, an all-male a cappella group at Yeshiva University, garnered more than 4 million YouTube hits after recording ?Candlelight,? a parody of Mike Tompkins?s a cappella cover of Taio Cruz?s ?Dynamite.? Image by Moshe Broder

One professional Jewish a cappella group is doing just that. Six13 is part of a growing number of Hebraic harmonizers springing up across America in recent years, mostly on college campuses.

“The growth of Jewish a cappella is following the trend generally in a cappella music in America,” said Mauro Braunstein of the group Techiya at Massachusetts Institute of Technology.

Indeed, Jewish a cappella is no longer just for college auditoriums. Six13 has sung “God Bless America” at five Mets games during the seventh inning stretch, and the Maccabeats, an all-male a cappella group at Yeshiva University, shot to viral superstardom in Hanukkah 2010 after recording “Candlelight,” a parody of Mike Tompkins’s a cappella cover of Taio Cruz’s “Dynamite.” The group’s music video garnered more than 4 million YouTube hits.

“I don’t think any of us thought it was going to be that kind of success,” said Joshua Jay, a member of the Modern Orthodox group.

Even non-Jews have gotten into the act, if only occasionally. At Miami University, the Men’s Glee Club sang a cappella music in celebration of Hanukkah; Harvard University’s Radcliffe Pitches have the Yiddish title “Bei Mir Bistu Shein” on their song list, and Emory University’s Aural Pleasure has been known to belt out “One Day” by Matisyahu.

Mike Boxer, director of Six13, estimates the number of Jewish groups to be about 40 today, compared with perhaps 30 a decade ago. This is quite an increase since what is believed to be the first collegiate American Jewish a cappella group, Pizmon, was formed in 1987. Consisting of crooners from Barnard College, the Jewish Theological Seminary and Columbia University, Pizmon has its ninth CD out and is planning to tour the American South in March.

Regarded as the go-to guy for all things Jewish a cappella, Boxer is one of those leading the way in helping to popularize the medium. His production company, Halfway Coherent Productions, provides musical services, plans events and produces the KolCast, a music and news roundup of the Jewish a cappella scene.

Daniel Henkin, musical director of Tizmoret at Queens College Hillel, said that a cappella has become more popular, in part because commercially successful groups like Backstreet Boys, *NSYNC and Boyz II Men have sung a cappella style, and in addition, Fox’s “Glee” and NBC’s “The Sing Off” have reached wide audiences. “Contemporary a cappella may have reached a tipping point,” Henkin told the Forward via e-mail.

Henkin offered reasons that Jewish a cappella groups may be singing contemporary songs more often: First, most college students are not necessarily drawn to traditional Jewish or liturgical music. Second, contemporary Israeli pop music is now closer to American listening tastes. Finally, he added, Jewish groups are looking to compete with secular groups for members and in competitions.

Repertoires get quite inventive, too. Six13 sings a version of the Black Eyed Peas’ “I Gotta Feeling” called “I Got Tefillin,” a rendition of Kanye West’s “Heartless” called “Latkes” and a version of Lady Gaga’s “Poker Face” called “Kosher Plate.”

Parody seems to be a common thread among the groups. Binghamton University’s Kaskeset transformed Queen’s “Bohemian Rhapsody” into “Boheimishe Rhapsody,” and Techiya sings a TV theme song about a popular crime fighting webbed wonder: Instead of “Spider-Man, Spider-Man / does whatever a spider can,” the group sings, “Abraham, Abraham / first on the planet to not eat ham.”

Humor comes in the form of monikers, too. Jewish a cappella groups “have puns in their names. It’s the law,” Braunstein said.

There is Shircago from the Windy City, not to mention the Indiana-based Hooshir. Then there are the MeshugaNotes, the Mazel Tones and Honorable Menschen — all of which are co-ed. (Although Orthodox custom prohibits listening to a singing woman’s voice, more liberal groups — including Pizmon, Tizmoret, Kaskeset and Techiya — generally allow both male and female singers.)

Henkin noted some other trends. He said Jewish a cappella groups in recent years have increasingly added vocal percussion (commonly known as beat boxing, in which singers mimic the sound of instruments). Henkin also said that choreography and dance moves are playing a more significant role, especially for those entering international competitions, and that as contemporary a cappella matures, musical arrangements have become more layered and complex.

But Benny Taubenfeld, general manager of Sameach Music, a wholesaler in the Jamaica section of Queens that serves Judaica stores nationwide, said some in Orthodox circles believe that if a cappella music either uses vocal percussion or borrows secular songs and puts Jewish lyrics to them, it crosses the line. Live a cappella nevertheless can be performed on the Sabbath, a day when there is a rabbinic prohibition on playing musical instruments.

Taubenfeld, whose clients are mostly Orthodox, said that sales in a cappella music spike twice a year: around the Counting of the Omer and again around Tisha B’Av, both involving periods of mourning during which Orthodox Jews largely don’t listen to music — but they do listen to a capella. Taubenfeld said there is a wide range of sound, with Hasidic a cappella being quite subdued.

But for others, a cappella can be sung any time, day or night. Atara Mayer, president and co-founder of the University of Maryland’s Mezumenet, one of just a handful of women-only Jewish collegiate a cappella groups in the U.S., said that after voting in a new member, the rest of the group went to the girl’s dorm room to sing in celebration of her acceptance into the group. The group barged into her room and awoke her. The new recruit was serenaded and then went back to sleep, not remembering it in the morning.

Gary Shapiro is a writer living in New York.

The Maccabeats singing “Candlelight,” a parody of Mike Tompkins’s a cappella cover of Taio Cruz’s “Dynamite:”