Was This Really Television’s Golden Age? 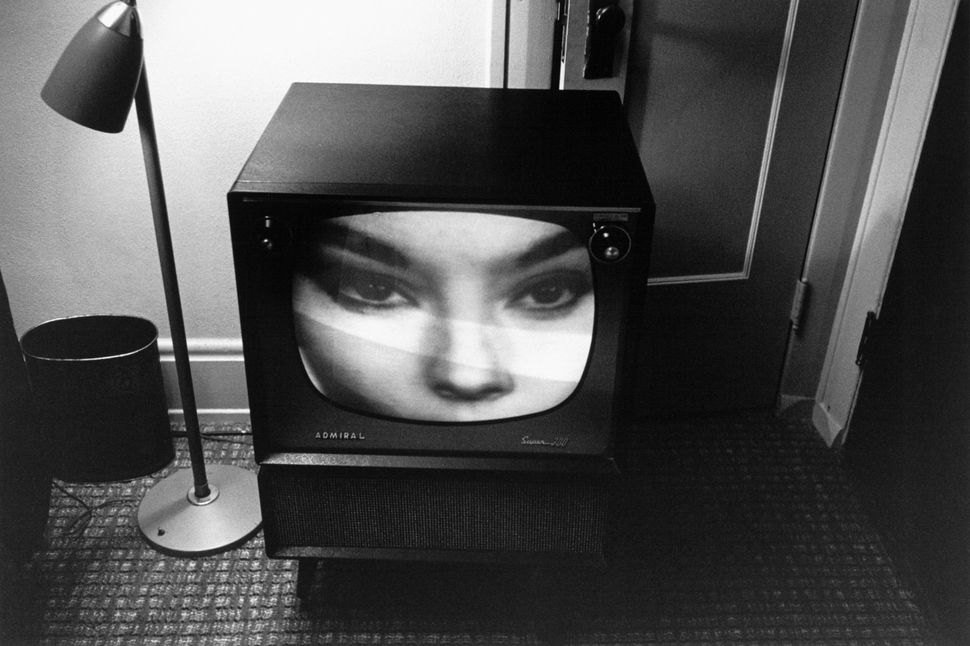 Halfway through my visit to the Jewish Museum, someone thought to turn down the Barbra Streisand. Or maybe I just got used to it. Either way, it was a blessing. For, the sound of Babs belting out the Peter Matz tune “Gotta Move,” from her 1966 CBS TV special, “Color Me Barbra,” threatened to drown out just about everything else in “Revolution of the Eye: Modern Art and the Birth of American Television,” an exhibit about how modernist art and design influenced the aesthetics of early network TV.

Projected on a screen near the exhibit’s entrance, Streisand — wearing a sleeveless dress with a color scheme suggestive, at least to these eyes, of the NBC peacock — struts and vamps her way through a gallery in the Philadelphia Museum of Art, singing of her desire to escape a quotidian existence and find “some place where I can just be me.” The juxtaposition of the Streisand song with the museum setting seems intended as a paean to artistic self-expression. And yet, the metaphor is more complicated than that, especially when the clip is played at high volume on an incessant video loop that, by the time replay number 25 rolls around, begins to recall enhanced interrogation techniques. At some point, you start thinking of confinement more than liberation — you become aware of the art direction, the choreography, the vocal technique, of the frames within frames. I was reminded of a comment a friend of mine made regarding his dating life — “You don’t know how long I had to plan to be spontaneous.” The more you see and hear it, the more Streisand’s performance becomes the world you wish she could break free of. You wish you could break free of it too. Or at least I did.

A similar tension pervades the exhibit, which explores not only how artists adapted a new medium but also how that new medium adapted them. Among the artists on display are those who found freedom within the confines of the small screen and those who seemed somehow constricted by it. Rod Serling’s passion for social justice elevated his teleplays for “The Twilight Zone,” invoking metaphors for the Holocaust while employing a visual aesthetic informed by French surrealists. Curator Maurice Berger notes the similarities between Andre Breton’s “Surrealist Manifesto” and Serling’s classic “Twilight Zone” introduction — “You are about to enter another dimension.” And so forth. For his part, Ben Shahn shares similar passions and political concerns with Serling, but those are not always apparent in the exquisite CBS print ads he designed in collaboration with CBS art director William Golden, who was responsible for the network’s iconic “eye” logo.

The exhibit plays nicely with parallels and oppositions. The first room is predominantly black and white — you’ll find Lou Dorfsman’s print advertisements for CBS here; Ezra Stoller’s photographs of CBS’s Television City; clips from “The Twilight Zone” and “The Ernie Kovacs Show.” I never quite got the appeal of the latter, but tons of smart people did, so whatever. The second room bursts “Wizard of Oz”-like into Technicolor with particular attention paid to clips featuring pop art and psychedelic sets for “Laugh-In,” “Batman” and “The Ed Sullivan Show.” But even here, there are tensions and contradictions between artistic inspiration and commercial reality. Put another way, yes, the sets for “Laugh-In” are still cool to look at, but the show is best experienced with the volume turned all the way down.

A third room here is devoted to the work of Andy Warhol, including selections from some of his TV commercials and a short 1981 film, “Andy Warhol’s TV,” that appeared on “Saturday Night Live.” You’ll find Warhol’s 1980 portrait of the Marx Brothers from “Ten Portraits of Jews of the Twentieth Century” here too. But, to be honest, 15 minutes of fame is probably a bit more than this particular room requires.

No, the most memorable aspects of the show are not its Streisands or its Warhols, but its discoveries, the glimpses it offers of by-now-nearly-forgotten moments of television’s early days — Sidney Peterson’s delightful animated 1955 children’s film “The Invisible Moustache of Raoul Dufy”; clips and artifacts from the 1950s kids’ show “Winky Dink and You,” which anticipated the concept of interactive television; avant-garde, or at least avant-garde- for-the-time commercials for Esso gasoline and Life Savers.

Walking through the exhibit, one might feel a momentary pang of regret for the passing of a golden era, one in which Saul Bass designed commercials for Mennen Baby Magic lotion and the credits for “Playhouse 90,” when Aline Bernstein Saarinen interviewed Edward Hopper and Georgia O’Keeffe on a network TV show, and Salvador Dali was a featured guest on “What’s My Line?” But, the more you think about it, the more you realize that the convergence of artistry and television was hardly unique to the early days of television, and one could make the argument that, even then, it was the exception more than the rule. “The Twilight Zone” ran for five seasons and never cracked Nielsen’s Top 25. In 1959, when Rod Serling was entering that dimension “not only of sound but of mind,” the top three shows were “Gunsmoke,” “Wagon Train” and “Have Gun, Will Travel.” Say what you will about “Andy Warhol’s TV” on the October 3, 1981, episode of “Saturday Night Live,” and personally, I’d prefer not to say all that much, but Season 7 was hardly SNL’s finest hour.

In fact, an argument can be made that right at this moment — with the Internet redefining our concepts of narrative and time, when a story can be as short as a Vine video or as long as the second season of “Breaking Bad” seemed to be, when a Geico commercial can be as short as a pre-roll, we’re living in as much of a golden age now as we were then. Artists are always adapting and transcending the media in which they work; one way or another, we will always exist in that twilight zone between aesthetic ideal and economic imperative; we will keep striving to reach that place Barbra Streisand sang about. Just as long as we don’t have to keep hearing her sing about it.

“Revolution of the Eye: Modern Art and the Birth of American Television” is on view at the Jewish Museum through September 20, 2015.

Was This Really Television’s Golden Age?