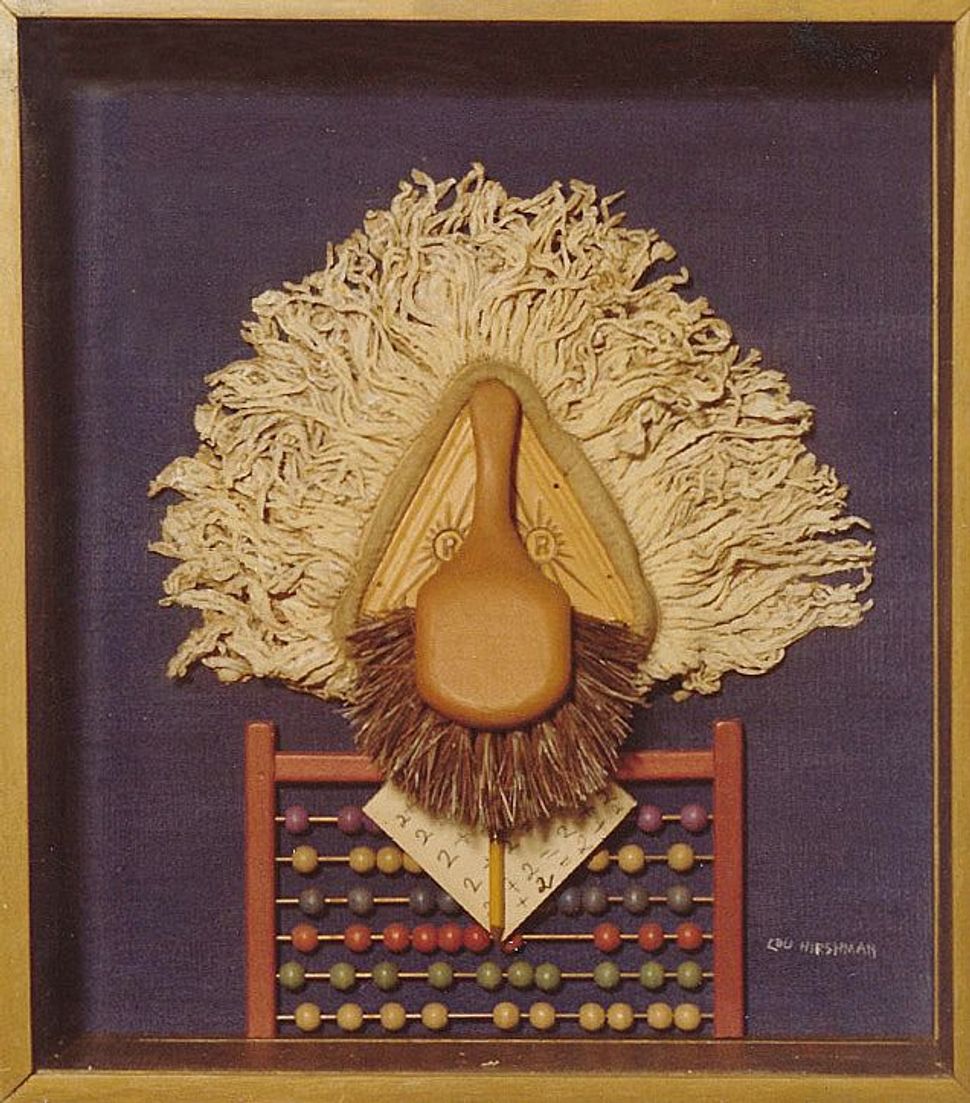 For every Al Hirschfeld — whose splashy retrospective just opened at the New York Historical Society — there’s a Sam Berman or Alan Jedla, star caricaturists whose fortunes faded along with the glory days of newspaper cartooning.

But Drew Friedman and Stephen Kroninger won’t let them disappear. In fact, they conjured the artists on May 6 at a sold-out talk dubbed “12 Legendary Caricaturists You’ve (Probably) Never Heard Of” at Manhattan’s Society of Illustrators.

Like many of their celebrity subjects, some of these “lost” artists were Jewish. Their backgrounds colored their choice of themes and even pen names; Jack Rosenblum, for example, became the less-detectable Alan Jedla.

“I think he wanted to play down the Jewish aspect, like the comedians in my books,” says Friedman, the author and artist whose Old Jewish Comedians series got its own exhibition at the Society of Illustrators last year. “It was the ‘40s and ‘50s. Jewish didn’t always play.”

Why did some artists endure while others nearly vanished from popular memory? “Put it this way: Hirschfeld was at The New York Times. The Times survived. The other 11 New York newspapers didn’t,” said Kroninger, an award-winning collagist whose illustrations earned a retrospective at the Museum of Modern Art. “Louis Hirshman was in Philadelphia. And he didn’t work for a newspaper, but for himself and galleries. Maybe that was part of the problem.”

The pair keep discovering “new” artists, Friedman said. “I think it’s a good idea for a book. We just would enjoy introducing people to this work. Everybody thinks of Hirschfeld when you think of caricature. But there are so many who fell by the wayside who should be remembered.”

With that in mind, the Forward asked Friedman and Kroninger for insight into some unforgettable images from these forgotten Jewish artists. 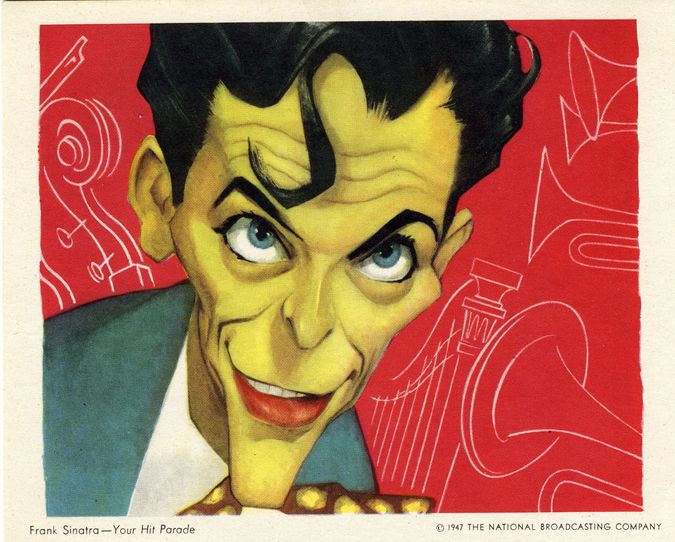 Drew Friedman: Sam Berman was huge. He did the animated sequence that opened “The Honeymooners,” created the Esky character for Esquire magazine, created opening credits for the classic film “Nothing Sacred.” For reasons only he knew, he went into mapmaking in the 1950s, and was very successful. He moved to Spain, and his name started disappearing. But you know his work when you see it.

This isn’t a flattering image, but caricaturists are not supposed to worry about that kind of thing. It’s a beautiful portrait — look how the spit curl turns into an “S” on his forehead. You see these Sam Berman portraits all over Wikipedia pages for old celebrities. I had no idea who he was, but dug into it, and discovered this legend. This image was in a promotional booklet for NBC. They’d printed 100,000 copies to promote radio shows in 1947. By 1948, TV had taken over, and most of these guys had switched from radio. These booklets included 56 full-color, 6” x 8” cards. I don’t know how much time Sam Berman was given to do them, but I stress out if I have one deadline within the week. I have no idea who owns original artwork. 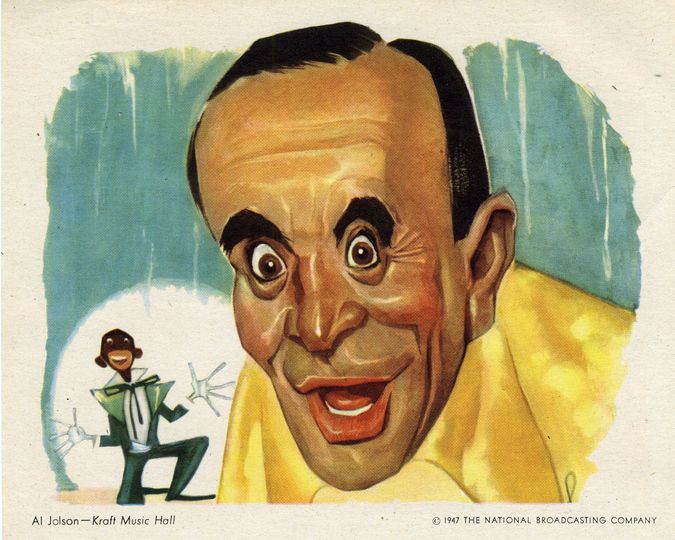 Drew Friedman: Berman drew a few Jewish guys for the NBC series — Eddie Cantor, George Burns, Milton Berle, Al Jolson. This captures Jolson’s personality pretty well, from what I’ve heard about him. He was a pretty obnoxious guy — this image pretty much captures that. He was hot at the time. “The Jolson Story” had come out the year before. Jolson had such a massive ego that he wanted to play himself, even though he was old and bald by that time. Larry Parks ended up playing him.

The image shows him in blackface, which was still pushing it in 1947. I don’t even think Jolson was doing blackface anymore.

Drew Friedman: Jedla’s real name was Jack Rosenblum. He was born on the Lower East Side, and taught at a Brooklyn girls’ art school in Brooklyn in the 1930s alongside a guy named Zero Mostel. After the war, in the ‘40s, his career took off — Broadway posters, illustrations in every single issue of Esquire from ’46-’48. He did posters for the Marx Brothers and other celebrities. Jedla eventually developed cataracts — the worst thing that can happen to a visual artist — and died relatively young, at 60. His work was never reprinted; he just faded into obscurity. It was just bad luck.

Jedla’s style was still evolving when he did this propaganda poster. It’s kind of clunky, but there’s potential there. Later, he develops this beautiful, muted painting style. Did his Jewishness affect the tone of the cartoon? This was an assignment for him, but I’m sure he had personal feelings. You don’t get the anger in celebrity caricatures. But cartoonists can become venomous drawing dictators and political figures. People like Jedla really sank their fangs into it. 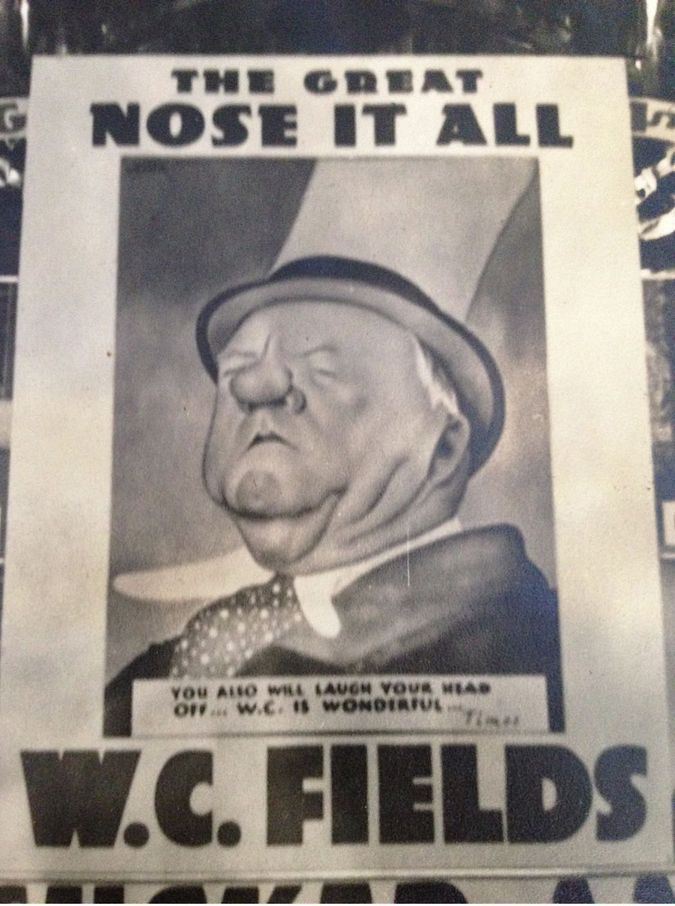 Drew Friedman: This film poster is clearly by Jedla. It’s not very flattering — I never saw so many folds in Fields’ face. It was pushing the envelope. But, obviously, the film company was happy with it — the image towered over Broadway. I have no idea if Fields saw it or even cared. But I like it. 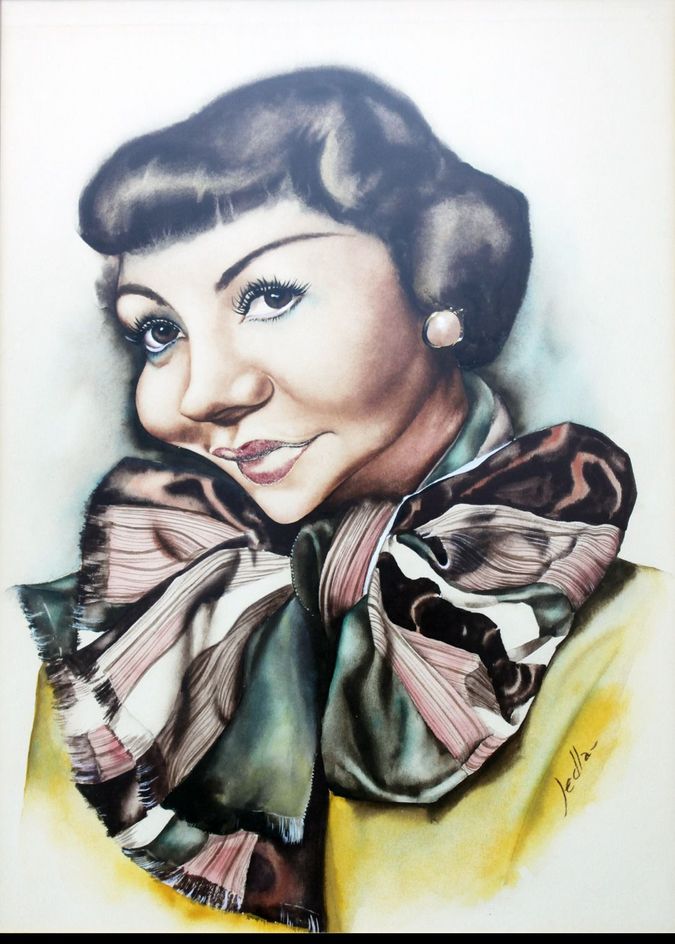 Drew Friedman: Jedla opened his gallery in Brooklyn 30 years before there was a Hirschfeld gallery. But then he disappeared. When he opened his gallery, Jedla did commission pieces, and created images of movie stars specifically to sell. I love this piece, especially for the handkerchief she’s wearing. It’s got beautiful detail. A lot of stars he drew loved these images. There are press photos of actors and theater people posing in his studio with these images. When Jedla died, whatever hadn’t sold in gallery was distributed to family members. I don’t even know what happened to most of the pieces. 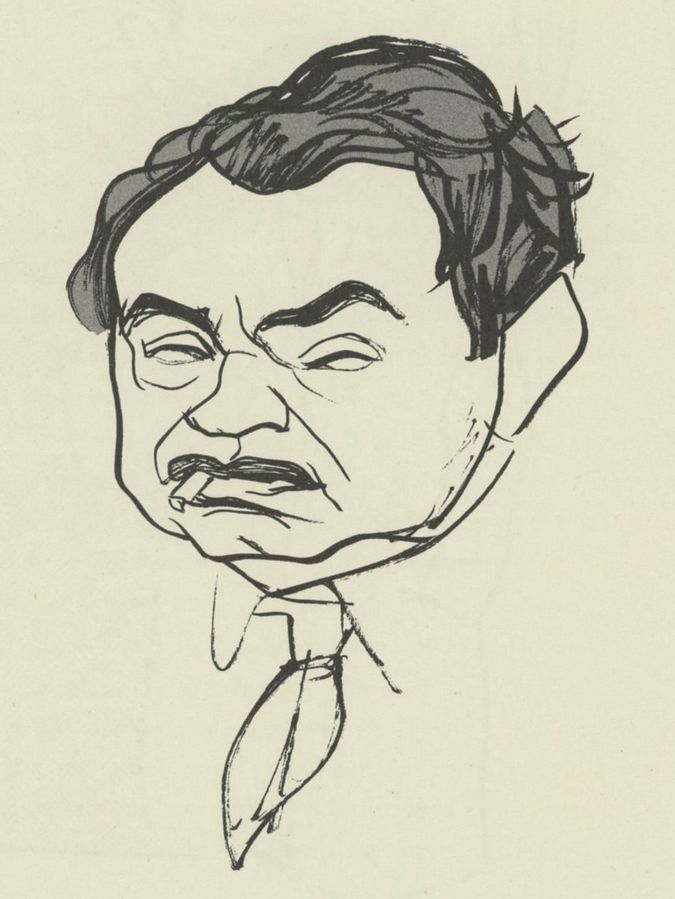 Stephen Kroninger: It’s just a beautiful drawing of Edward G. Robinson, who of course was the Jewish actor. It captures him perfectly. Levy was an incredible draftsman. He drew from life, meaning he visited Edward G. Robinson wherever he was at the time — in Hollywood, or on Broadway. When you draw from life, you’re talking to the person. There’s an interaction. You look at this image, and you’re in the room with Robinson. It’s different from drawing someone’s image off a screen. There’s a lot of personality in the drawing.

Auerbach-Levy died in 1964. I don’t know why he didn’t endure. But you need a platform where you can keep showing your work, become ingrained in the public’s imagination, and become part of their routine. Hirschfeld was in the Times every Sunday. Auerbach-Levy worked for the New York World, which ceased to exist. 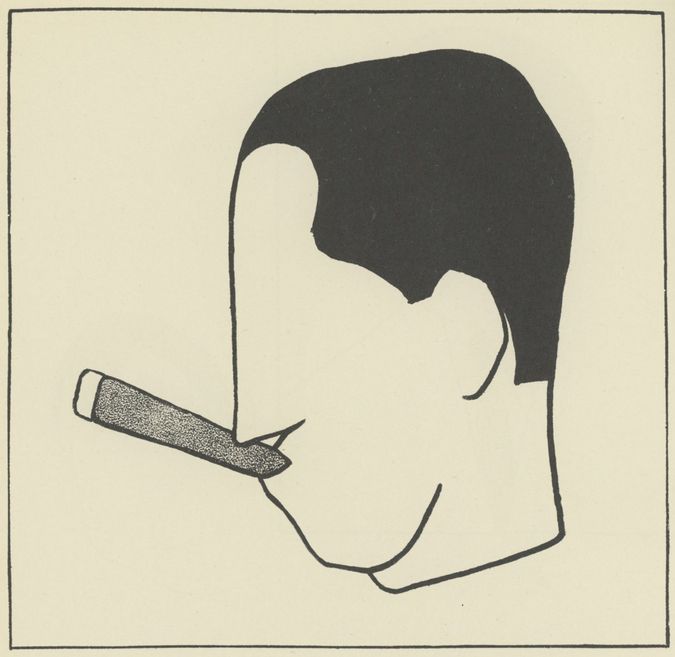 Stephen Kroninger: Again, just a beautiful portrait. Just as Edward G. Robinson was highly detailed, there’s an incredible simplicity about this caricature of Gershwin. I always found this amazing about Levy’s work. A few lines, and he captures the individual. He met these people and drew from life. Auerbach-Levy hung out with people like Gershwin and George S. Kaufman — he was a respected part of that circle. I don’t know if there’s anything analogous to that today. 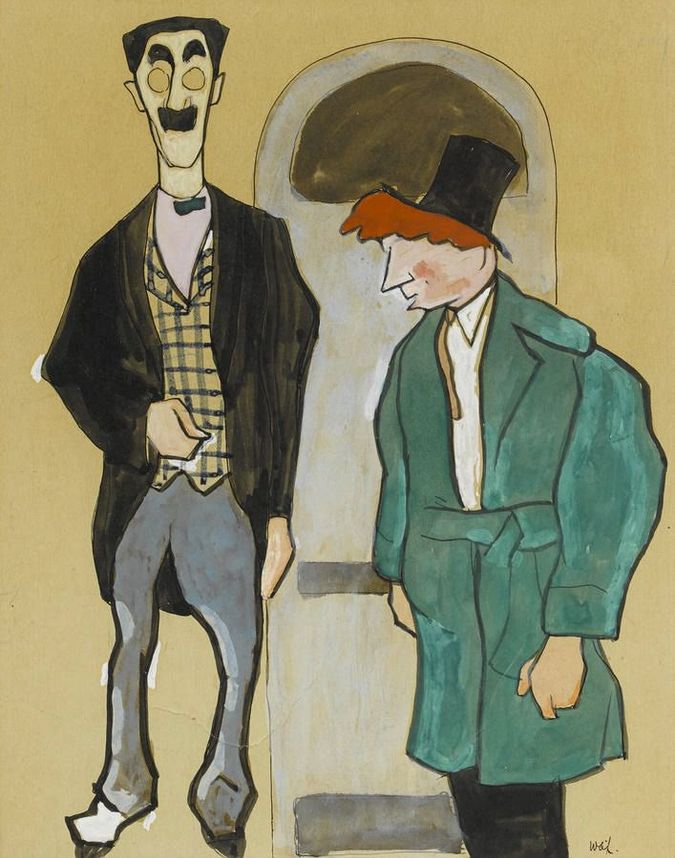 Stephen Kroninger: This comes from “Cocoanuts,” the Marx Brothers’ Broadway show of 1923. They’re so sedate-looking in this drawing. But their stage shows, apparently, were frantic. Levy sat in the wings, sketching the Marx Brothers while they were performing “Cocoanuts.” They pulled him out one night for one of their routines. The Marx Brothers were anarchy. They just ad-libbed, and then they haul out this guy unwittingly. 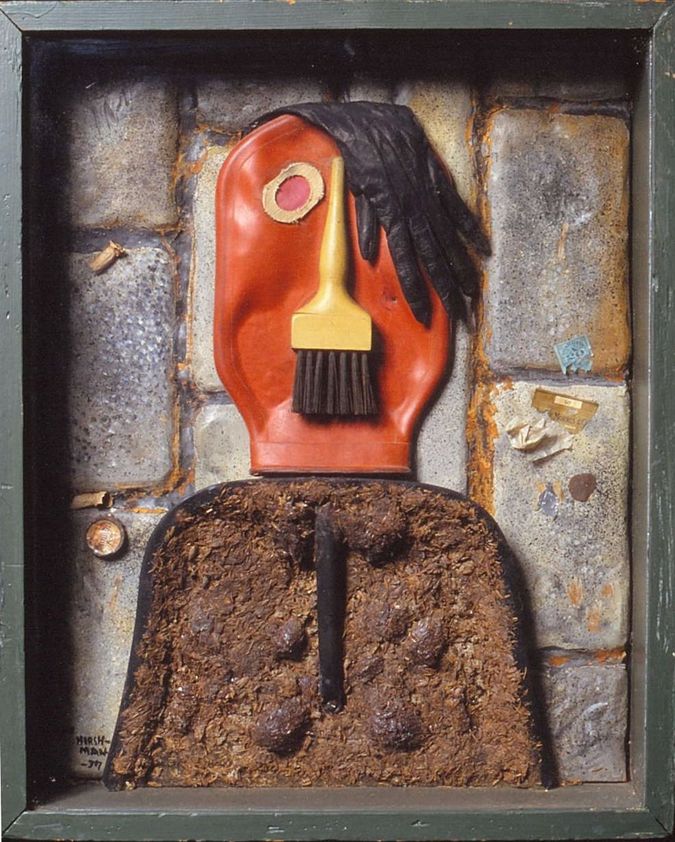 Stephen Kroninger: This was from 1937. This piece probably hasn’t been seen in more than 80 years. Hirshman’s son, William, provided me with images of the work. But Hirshman’s wife sold off a lot of the originals after he died, or gave it away. The son, who lives in Germany, was heartbroken about that.

Hirshman would use household objects. The bricks here are the gutter — you see bottle caps, cigarette butts. He wanted to put Hitler in the gutter. The head is a hot-water bottle. Hitler’s hair is a black leather glove, to represent the Gestapo. The nose is a paintbrush. Hirshman’s mocking Hitler, who was a failed artist and a paper-hanger. The body is hay infused with horse manure. That tells you what he thought of Hitler. 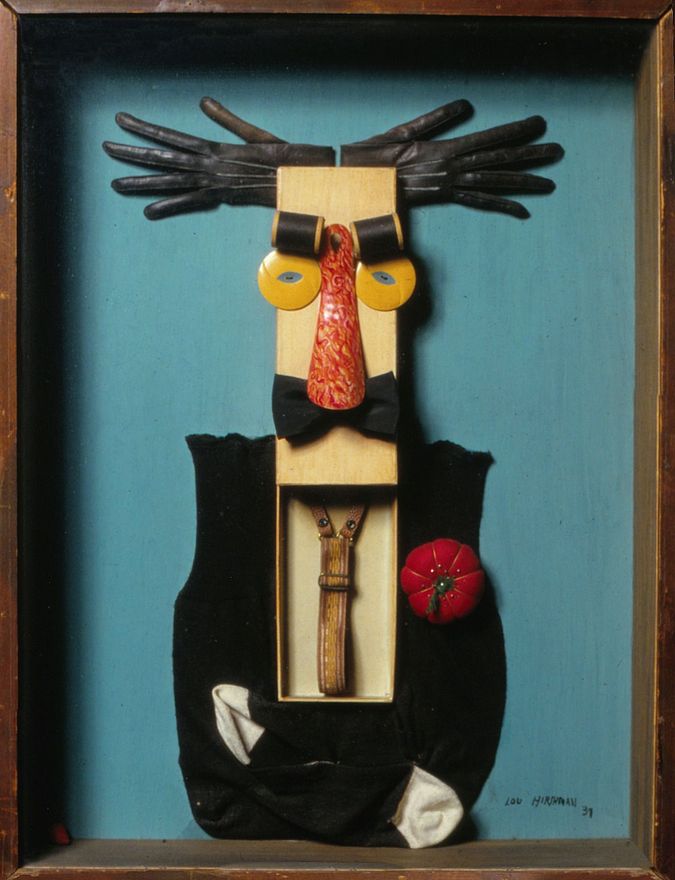 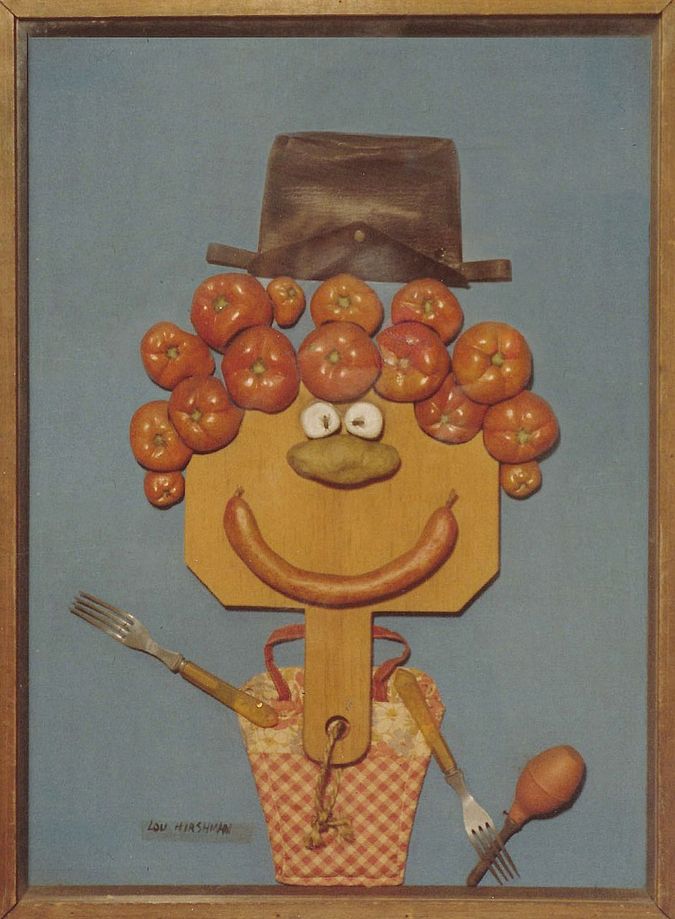 Stephen Kroninger: Hirshman saw himself as a serious artist. He did what he wanted to do, and portrayed who he wanted to portray. He had an anarchistic personality, and the Marx Brothers appealed to that. So did their outsider humor. All of these portraits are made of objects he would find. But the items had real significance. Groucho’s amazing — his eyebrows are spools of black thread. He’s got black gloves for hair. It’s a beautifully constructed piece. For his portrait of Harpo, Hirshman used tomatoes for hair, sausage for a mouth, a potato for nose, and marshmallows for eyes. Harpo has forks for arms — in a famous routine involving him and a cop, silverware came pouring out of his coat. 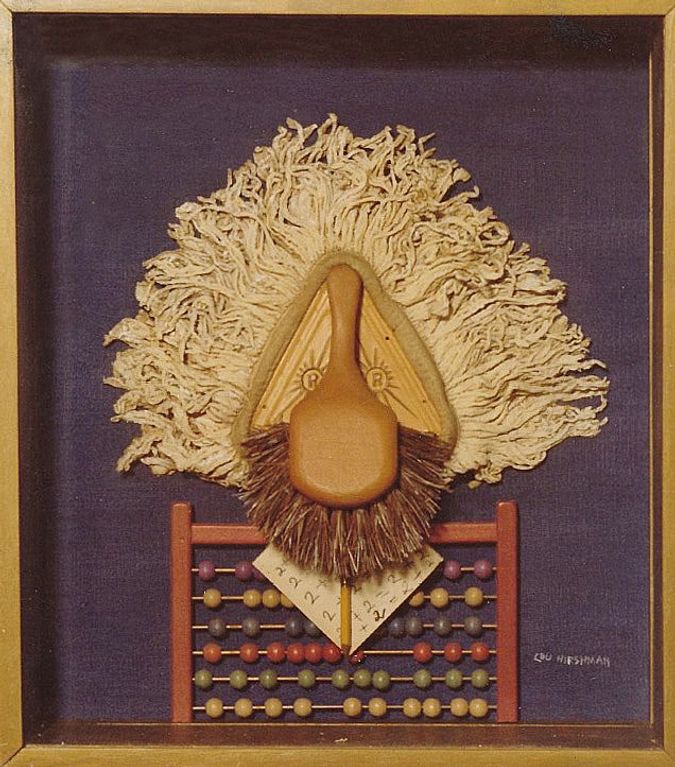 Stephen Kroninger: I’m a collagist, so I love this one. I Iove the simplicity of it. His face is just a mop and a brush. Hirshman just put these two pieces together, and it’s Einstein. The Philadelphia Museum of Art owns this one. Obviously, Hirshman respected Einstein. He also respected the Marx Brothers, but in a different way — they were kindred spirits.