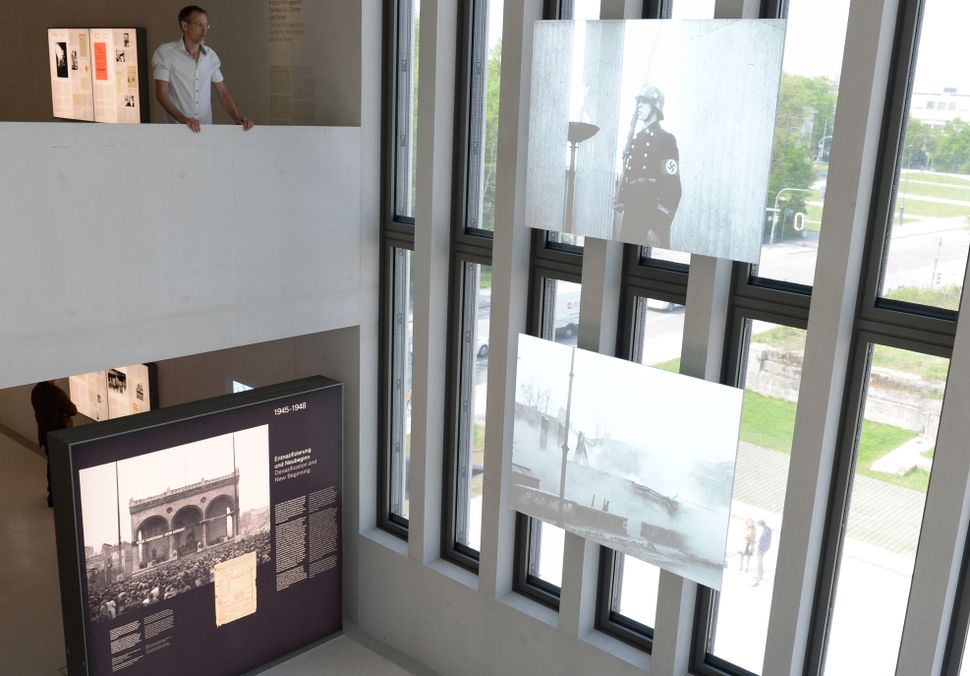 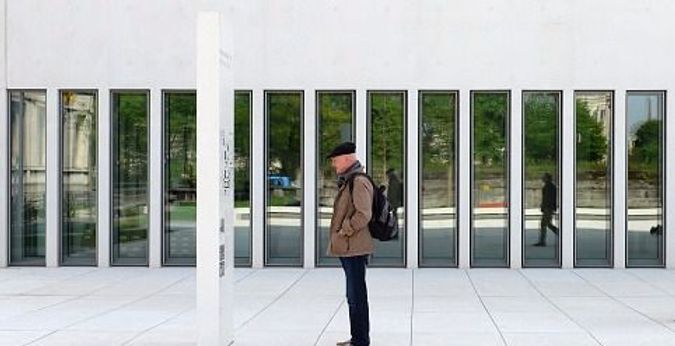 What would Adolf Hitler say today if he walked by Munich’s recently opened Documentation Center for the History of National Socialism? I posed this question to the German novelist Timur Vermes when we visited the city’s newest and most overdue museum together.

Vermes was the perfect person to ask, as he is the author of the runaway best-seller “Look Who’s Back,” which imagines the führer coming back to life in present-day Berlin and becoming a popular talk show host. The overtly satirical novel, which has sold nearly 2 million copies in Germany and been translated into 42 languages, is significant for reflecting a growing German desire to adopt a less moralistic view of Hitler’s legacy and an eagerness to laugh at it openly.

In indulging this wish, Germans are taking part in a broader trend, for signs of the normalization of Nazism abound all over the world. Whether one thinks of the countless YouTube parodies of Hitler ranting uncontrollably in his Berlin bunker in the 2004 film “Downfall,” or the sale of “Hitler” brand ice cream in India, the Nazi dictator’s legacy is being manipulated, commercialized and trivialized as never before.

Against this surprisingly lighthearted view of the Nazi past, the opening of the new Munich museum stands as an important corrective. Built on the site of the first party headquarters, the notorious Brown House, and standing adjacent to Hitler’s monumental Führer Building, where the 1938 Munich Pact was signed, the documentation center presents an unsparing narrative of Munich’s deep historical connections to the Nazi movement. In several floors of galleries containing textual and visual artifacts, the exhibit describes the local citizenry’s enthusiastic support for Hitler’s fledgling NSDAP in the early 1920s, the city’s subsequent status as the national “Capital of the Movement” after 1935 and its role in the ensuing crimes following the unleashing of war in 1939.

This frank narrative represents a radical shift in the way the people of Munich perceive their city. For decades after 1945, most citizens generally tried to suppress Munich’s identity as the birthplace of Nazism and preferred to portray it as a cheerful and cosmopolitan “metropolis with a heart.” From the city’s traditionalist style of reconstruction after 1945, which made the war look as if it had barely happened, to its selective commemoration of the Third Reich’s victims in postwar memorials, which gave little attention to Jews, Munich’s urban form expressed a desire to sweep the Nazi past under the rug.

Only in the late 1980s, at a time of rising German nationalism, did a modest city council proposal to build a documentation center appear on the local agenda. Endless debating and delays ensued, but almost 30 years later, the building is finally complete. 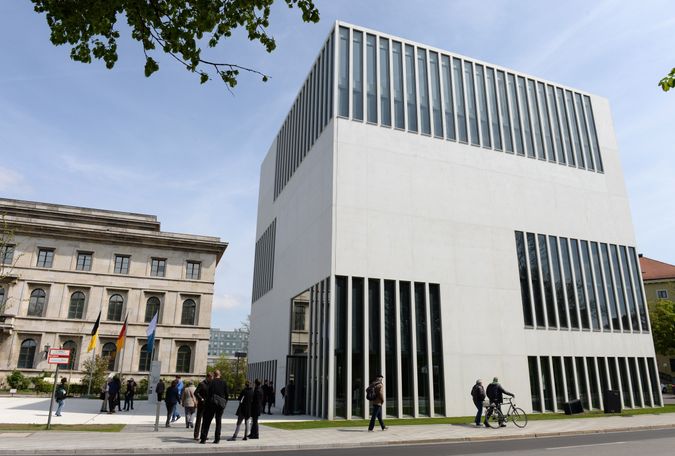 Scene of the Crime: Munich’s museum is located on the former site of Nazi party headquarters. Image by Getty Images

But is it too late? On the one hand, the documentation center has been a smash success, drawing tens of thousands of visitors in its first month of operation. Yet Vermes contends that the museum would have been more effective had it been built in the 1990s, at a time when international concerns about newly unified Germany’s political reliability were especially acute. In light of the fact that other German cities, such as Berlin, Nuremberg and Cologne, directly faced their own Nazi pasts by erecting museums at this time, Munich is undeniably a latecomer to the memory boom.

As a result, the question today is how the museum will function in a country that faces new and very different problems — among others: integrating foreigners into an increasingly multicultural society; maintaining leadership over the perilous process of European integration, and contending with foreign policy challenges in Russia and the Middle East.

Yet, however belated the museum’s arrival, its message about the past has relevance to the present. The museum’s exhibit admonishes visitors about the dangers of intolerance toward minorities, a problem highlighted by the rise of the anti-immigrant group PEGIDA, whose leader, Lutz Bachmann, recently came under fire for having posted on Facebook a photograph of himself with a Hitler moustache. The museum’s exhibit will also help visitors understand the backlash against Chancellor Angela Merkel’s government, which has been attacked by critics in Greece, Italy and other debt-ridden countries as the “Fourth Reich” for its domineering insistence on painful austerity measures. These and other present-day controversies surrounding the Third Reich make clear that, however much Germans wish it were otherwise, the past is not yet past. 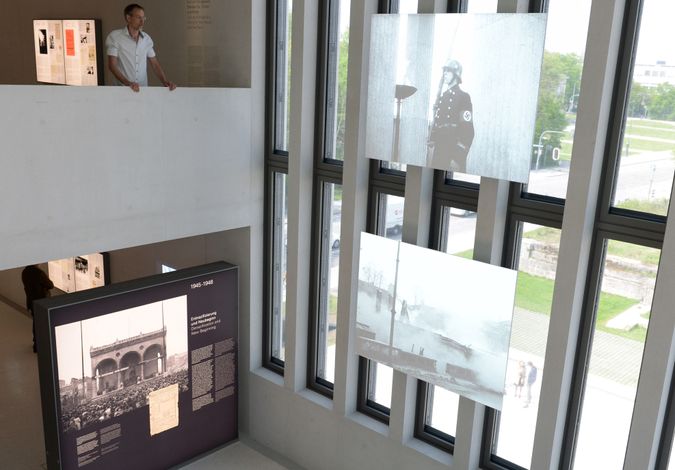 This fact is reflected, finally, by the success of “Elser,” the new film by Oliver Hirschbiegel, director of “Downfall.” Subtitled “He Could Have Changed the World,” the movie depicts the failed assassination attempt by the Swabian artisan Johann Georg Elser against Hitler in Munich’s Bürgerbräukeller beer hall on November 8, 1939. If not for bad weather, which resulted in the führer ending his speech 13 minutes early, a bomb placed by Elser inside a wooden column behind Hitler’s podium would have probably killed him. The film does not answer the question of how history would have turned out had the plot succeeded, but it allows German viewers to indulge the fantasy that somehow their nation’s path into barbarism could have been avoided.

Germans cannot go back in time and alter the past, of course, and so Munich’s new museum may be the next best thing — an insurance policy against any future backsliding into Nazi ways. Before visitors leave the documentation center, they are told by a final display that while Germany has made great strides since 1945, Nazi ideas continue to survive and bear watching.

Which brings us back to the question: if Hitler were to return to life today, how would he view the museum? According to Vermes, the ex-Führer would admit that its exhibit was “quite accurate in showing everything we did” but would object to the fact that it “makes it look bad,” dismissing it as “the usual democratic rubbish.” Moreover, he would add that “we had the support of the German people, because we looked into their hearts and did what they really wanted.” “If they were free to speak,” he would ominously conclude, “we would have their support right now, too.”

This chilling, if fictional, vision of Hitler denying any wrongdoing reminds us of the need to vigilantly attend to the lessons of history. Although Hitler is dead and buried, the possibility persists that his fanatical ideas may retain popularity in certain quarters and be embraced for extremist purposes. The new Munich documentation center seeks to ensure that, in today’s Germany, the legacy of the Third Reich is not exploited to create a fourth one.

Gavriel Rosenfeld is a professor of history at Fairfield University and the author of the book “Hi Hitler! How the Nazi Past Is Being Normalized in Contemporary Culture” (Cambridge University Press, 2015).