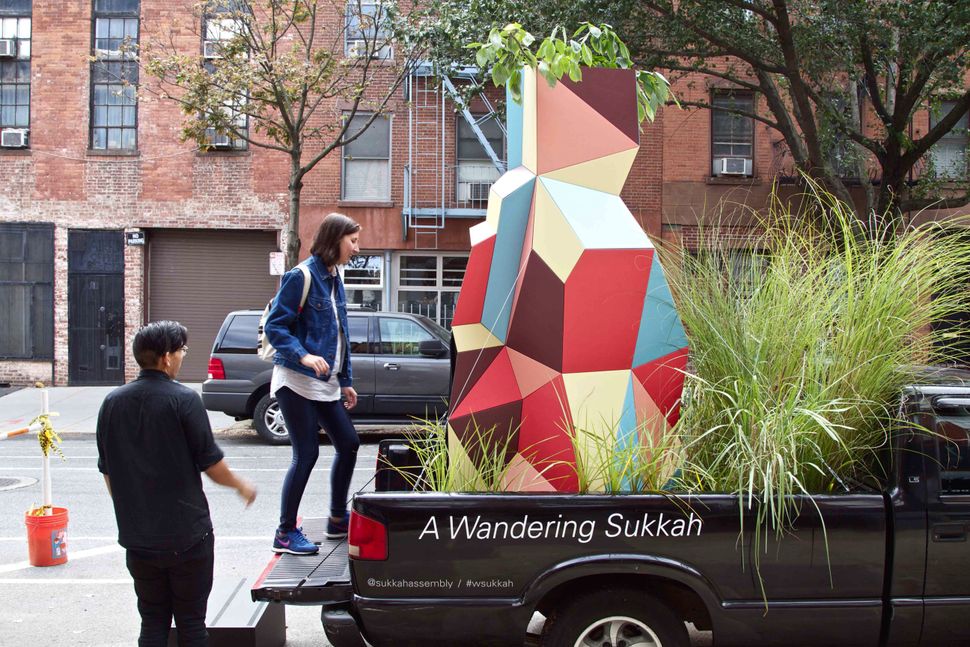 There is a 1960s style sukkah bolted atop a black 2003 Chevrolet pickup with Connecticut plates driving through all five boroughs this week that looks unlike any wooden hut I made in Hebrew School during the holiday of Sukkot. It actually brought to mind the pattern of a vintage faux Pucci turtleneck I own and wore to dress up as a hippie for Halloween three years ago.

The Wandering Sukkah is a tower of an art installation by Danielle Durchslag and Ryan Frank made from Dibond, an aluminum material, and vinyl painted trapezoids stacked askew in sky blue, peach, pastel yellow, and two hues of red in brick and candy apple.

The two artists are driving the booth to designated areas in New York until Sunday to celebrate Sukkot and bring the festivities to the city streets. Only one person can stand comfortably inside the sukkah and Durchlag and Frank describe the project as a means for anyone, religious or not, to find peace and reflection within the urban landscape of New York.

It stands a little over ten feet tall and resembles such a variety of gentile dwellings that it’s difficult to settle on just one; these include a pyramid, teepee, igloo, chimney, or as one onlooker suggested, even felt like being inside a time machine. The trapezoid panels jut both out and in so when one looks at it from the side, it gives the illusion of being flattened. Durchslag and Frank modeled it after New York City skyscrapers made of bold, geometric shapes. They placed potted grass already yellowing from the harvest around the perimeter to replicate a city block.

On Thursday afternoon on East 4th Street across from Phebe’s Bar and Grill and a funky hair salon, the rain stayed at bay and the sukkah caught the gaze of joggers wearing headphones, tourists holding cameras and New York University students walking to class. Some took out their iPhones, others smiled and craned their necks as they hurried by, and a few were compelled by curiosity to stop and inquire about it, sometimes knowing “It’s Jewish right?” but not understanding the concept behind sukkahs, especially this one strapped atop a truck.

Durchslag acknowledged the idea of a mobile sukkah existed before long before she and Frank introduced theirs to the streets of New York. Part of the inspiration for the art show came from Mitzvah Tanks, recreational vehicles with an image of Rabbi Schneerson on the side that Chabad-Lubavitch Jews drive around on holidays to reach out to less observant Jews and invite them inside to partake in mitzvahs. One aspect of the Mitzvah Tanks is mobile sukkahs, which are strapped on the vehicles during Sukkot.

The Wandering Sukkah art installation isn’t mean to be religious however.

“We’re bringing it to places where sukkahs don’t go,” said Durchslag. But on Thursday because the truck was parked around the corner from the Chabad on Bowery, one of its members, Naftaly Zakon, brought out an etrog, a lemon-like fruit, and lulav, a palm branch, and asked the Jewish onlookers to put on a yarmulke and shake the spices inside the dwelling. He persuaded several to step inside.

“So this has never happened before,” whispered Durchslag. “Obviously Chabad has a very different agenda, but people get to engage with it the way they want.”

Durchslag grew up in a conservative community and built sukkahs every year with her mother, who is a Jewish Reconstructionist. Last year, she and Frank, who is Catholic, utilized her city balcony as a spot to build a collaborative structure with other artists she knew and invite friends to visit.

The Wandering Sukkah began as a Styrofoam model. A graphic designer was called upon to create sketches and give it a color palette chosen from a wedding blog. The drawings were taken to The Factory, a design and fabrication studio in Brooklyn, which then produced 3-Dimensional sketches and made the renditions into a functional form. The artists consulted a landscape architect for the potted grass that envelops the structure and employed an intern and a production assistant. Then, Durchslag and Frank bought the truck together off Craigslist from a man in Queens, teamed up with neighborhood businesses so they could be given parking spaces, raised $26,000 and each invested $2,500 to get the project moving.

“So far, we have spent….a lot,” said Frank laughing.

For all the work, the sukkah is meant to bring tranquility, yet many who stepped inside showed signs of trepidation and uncertainty.

“What’s going to happen to me when I step in?” one woman asked.

Individuals in groups took turns stepping onto the bed of the truck, which bounced as they did so. Many only lingered a few seconds, enough to look up at the sky through the open roof covered by leaves collected from Riverside Drive, touch the black walls and maybe pose for a photo.

“I was very conscious that everyone else was waiting to go in,” said Savannah Downs, an intern at Creative Time. “It was kind of disorienting because it’s so multifaceted.”

Another intern, Salome Mkheidze, who had never seen or heard of a sukkah before, liked the “surprise” on the inside, a teaser Durschslag and Frank used to nudge people inside.

Pasted on the walls in clusters of one or two words is the sentence, “I am made of dust and the world is made for me.”

“It’s about looking up at the heavens and remembering how small you are,” explained Durschslag.

That concept seemed to have been lost on some. Two young women giddily walked over to the car and one asked, “Is it Jewish?” Upon hearing an affirmative answer, she pushed her friend towards the opening and said to pose inside so she could send a picture to the woman’s boyfriend.

“It’ll be like ‘look how Jewish I am! Don’t break up with me!’” The friend climbed inside and struck a pose, rousing the word “fierce” from another onlooker.

When her friend was done, the woman taking the picture asked, “What’s it called again?” referring to the sukkah and then the two ran down the block giggling.