Where the Characters Are Orthodox and the Themes Are Universal 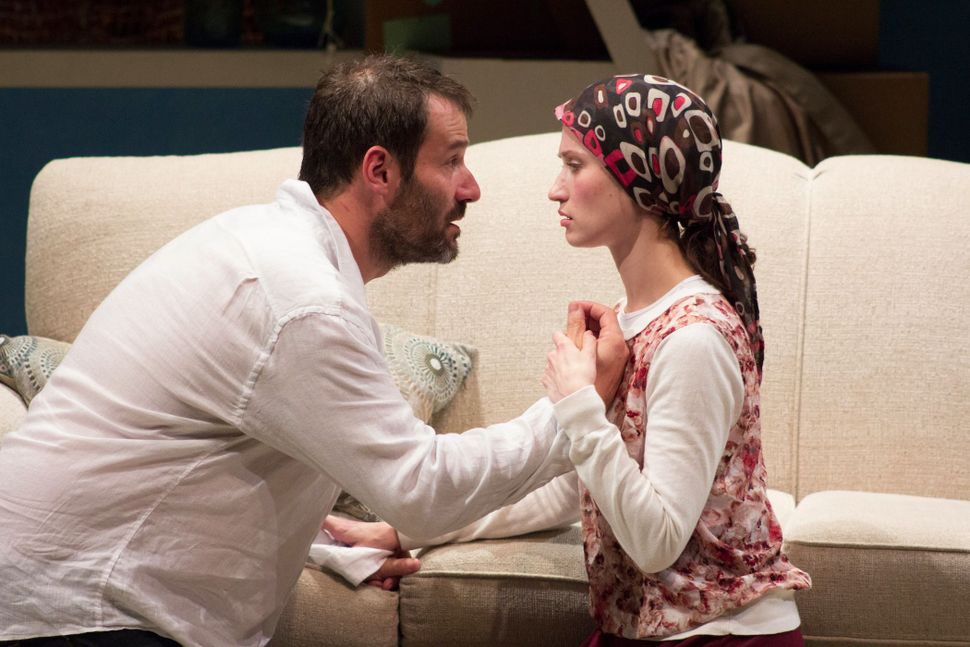 The first set The Actors Company Theatre uses in its production of Motti Lerner’s “Hard Love” is different from those usually seen in Manhattan’s Beckett Theatre. At first glance, it’s an ordinary kitchen, but a closer look reveals some intriguing features. A shelf mounted above a cabinet holds a tzedakah charity box bracketed by two Sabbath candlesticks. A small, square stone plaque with Hebrew writing on it rests by the window. The first character to appear onstage is Hannah, an Orthodox Jewish woman. Her hair is wrapped up in a scarf, her arms and legs are covered by long sleeves and a long skirt.

Several Jewish-oriented theaters around the country, including Boston’s Israeli Stage and Atlanta’s Jewish Theatre of the South, have already produced ”Hard Love.” This production, however, is remarkable because TACT has no religious affiliation, and Lerner is the first Israeli playwright whose work the company has produced.

“I never, ever get to play Jews,” said Victoria Mack, who plays Hannah. “It’s really wonderful for me to play someone Jewish and go to my shul and think of it as research. When I saw the tzedakah box on set I immediately had a flashback to being 12 and being told we should have a tzedakah box at home.”

“I enjoyed examining the play as a Jewish man who has faith, dealing with a man who doesn’t,” said Mack’s co-star Ian Kahn, who plays Zvi, Hannah’s Orthodox-turned-atheist former husband. While Zvi is almost fanatical in his rejection of Judaism, Kahn sees a great deal of Jewishness in him. “He’s very questioning,” Kahn said. “It is Jewish to question life; the joy of being a Jew is to question everything.”

That questioning is at the heart of Lerner’s play. Hannah and Zvi, who both grew up in Me’a She’arim, an ultra-Orthodox area of Jerusalem, were married for one year before Zvi decided to leave his faith and the community that came with it. The play begins 20 years after their divorce, when Zvi shows up on Hannah’s doorstep to discuss the burgeoning love between their children from their respective second marriages. The ensuing two acts delve into the couple’s history, their continuing feelings for each other and their dissonant ideas about faith and love. Along the way, Hannah and Zvi force each other to question their dedication to the values by which they’ve each chosen to live.

Scott Alan Evans, who is the play’s director and TACT’s artistic executive director, says he connected with “Hard Love” the first time he read it. “The thing that struck me,” he said, “was the ultra-Orthodox world I hadn’t seen on the stage presented in such a human way.” The choice to perform a play focused on such a specific community for a much broader audience wasn’t difficult for him. Part of TACT’s mission is to produce plays that, according to Evans, “haven’t been seen in New York in a significant amount of time, if ever.”

“It had been seen in this country several times before,” Evans said of “Hard Love,” “but mostly in theaters that specialized only in Jewish plays where the focus was on the Judaism.” While the spiritual aspect of “Hard Love” is powerful, Evans felt that the strength of Lerner’s writing, as well as the play’s universal relevance, was marginalized by being restricted to theaters catering to a more homogenous audience.

Mack says the play’s greatest appeal is the fact that it deals with “the issue of longing and the attempt to do what’s right. When the rules of your society are in conflict with what feels like the rules of yourself, that’s a very compelling conflict.” “It’s not a polemic in any way,” Evans said. “It’s how human beings behave and how they try to cope and survive and make sense of their existence.”

Watching the play’s final dress rehearsal, I was struck by how timely “Hard Love” is, especially with regard to the issue of marriage; in September the Reconstructionist Rabbinical College announced that it will start accepting students who are in relationships with or married to non-Jews. “Hard Love” offers an honest skepticism about the prospects of marriages between individuals with vastly different ideologies.

While “Hard Love” represents a new cultural frontier for TACT, Evans says its heart — “the life-changing ethical and moral choices we have to make as human beings” — is right in line with the rest of the company’s offerings. Hannah, Zvi and their love portray the making of those choices as a powerful, tumultuous ride.

“Hard Love,” presented by The Actors Company Theatre, is at the Beckett Theatre through October 31. Ticket information can be found at tactnyc.org.

Where the Characters Are Orthodox and the Themes Are Universal