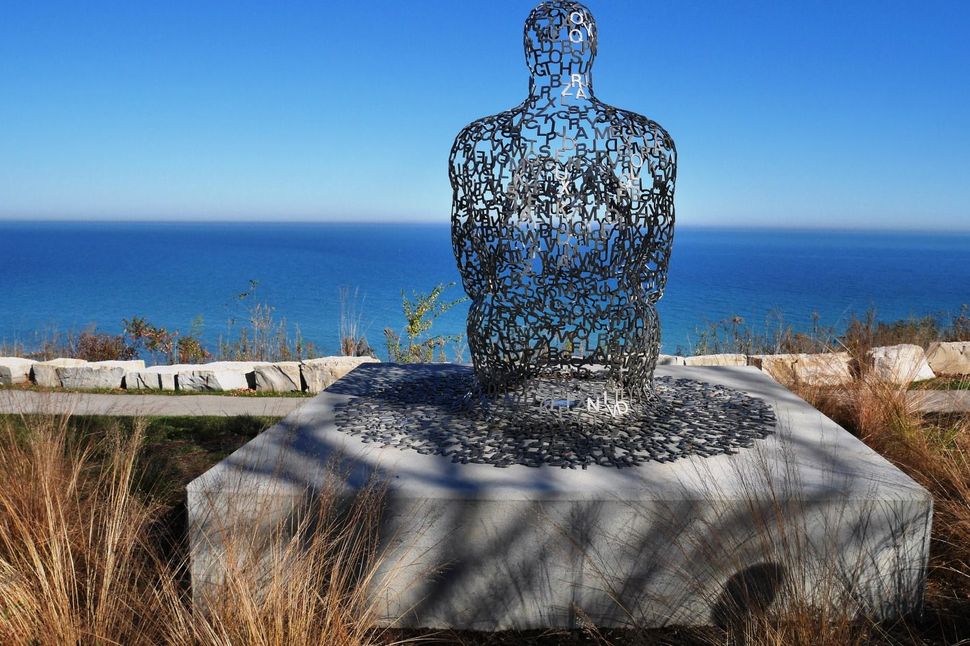 For five years a sculpture constructed with steel letters stood in a Milwaukee suburb, gathering some attention but no controversy — that is, until a visiting blogger from New Jersey saw it and declared there were antt-Semitic slurs embedded in the artwork. The result was an Internet fury, which culminated in the work quickly being removed from public view.

Now, as the artist, the Village of Shorewood and the local Jewish community ponder what to do with the sculpture – “Spillover II” by Jaume Plensa – there is only one sure conclusion: The power of the Internet cannot be denied.

On November 14, just six days after blogger Matt Sweetwood, posted that he saw the hateful words “Dead Jew,” “Cheap Jew” and “Fry Dead Jew” hidden in the sculpture, Shorewood had the sculpture removed from the park, which is located in a high traffic area overlooking Lake Michigan.

Yet, even though the sculpture is no longer on view, Kahn, Lonnie Nasatir of the Anti-Defamation League in the Midwest and others questioned whether the words were intentionally placed in the five-year-old sculpture, which was made and erected thanks to funding from an anonymous donor.

“Once a story hits the world of the Internet, you lose control,” said Kahn, who praised Shorewood officials and Plensa for acting quickly by agreeing to remove the statue and possibly revise it. “Truth becomes less important – perception becomes just as important.”

The eight-foot-tall sculpture created by Plensa, a Spanish-born artist whose works include the popular “Crown Fountain” in Chicago’s Millennium Park, crafts steel letters together to form the image of a crouching man. Plensa, through a spokesperson, declined to be interviewed.

“The letters from each alphabet are utilized to create a skin of an anonymous figure with each letter’s placement entirely at random,” according to an email statement issued on Plensa’s behalf by the owners of two galleries that represent him: the Richard Gray Gallery in Chicago and Galerie Lelong in New York. “Plensa is deeply saddened that his sculpture has been so egregiously misinterpreted. Plensa’s works and beliefs are the antithesis of anti-Semitism.”

The words can be viewed on the sculpture, though one may have to squint and be creative to see the same slurs that Sweetwood saw. The letters are not in a straight line – the “d” in “dead” is located above the “ead,” and the “p” in “cheap” is actually the combination of part of an “n” located below a “d.”

“I don’t know what to make of it — it’s like a Rorschach test,” said Rabbi Noah Chertkoff, of Congregation Shalom, a Reform synagogue located about 15 minutes from the park where the sculpture stood. “I can’t tell you if it’s intentional or not.”

Nasatir, the director of ADL’s Greater Chicago/Upper Midwest Office, said his office received many calls about the sculpture after Sweetwood’s post. Nasatir, however, expressed doubts that Plensa was using his sculpture to subtly espouse anti-Semitic beliefs and called the Internet eruption “much ado about nothing.’’

“If you’re looking for it, you could see it,” Nasatir said.

“It’s a shock that someone saw that after all the time it’s been up,” said Marc Cohen, interim director at the Hillel at University of Wisconsin-Milwaukee. “It’s really a beautiful sculpture. It’s kind of cool to drive by it at night.”

For his part, Sweetwood definitely believes he saw what thousands of other missed. His blog post, titled “Hateful Sculpture in Milwaukee (Shorewood) Wisconsin Needs to be Scrapped,” went up on Sunday, November, and included photos of the offending words. Sweetwood highlighted the lettering to make the phrases easier to spot.

“As a Jew from New Jersey, I prefer this kind of hate said directly to me,” Sweetwood wrote. “But this artist is a coward, so he sculpts his hate and runs away.”

The posting ran on Sweetwood’s own blog, msweetwood.com, and on the website maintained by the Good Men Project, which carries Sweetwood’s blog. The postings attracted more than 70,000 views, Sweetwood wrote in a subsequent article he posted on LinkedIn. The article provided tips to other bloggers about how to use social media to get attention and spark action.

The blog post was reposted repeatedly on Facebook and other social media and Jewish leaders (as well as Shorewood officials) were flooded with calls. Debate raged on the Internet over whether Sweetwood was imagining the anti-Semitic phrases or simply seeking attention for himself. Meanwhile, others chimed in with criticisms of the Jewish reaction to the sculpture, and Kahn said some of those comments were more hateful than anything she saw in “Spillover II.”

Sweetwood credited his keen eye for catching the slurs that thousands of others apparently missed.

“I can’t sing or dance, but I notice everything,” Sweetwood, said by way of explaining why he saw what nobody else saw. He blasted Jewish leaders who questioned his discovery, initially calling them “cowards”; he quickly backed away from the charge, saying “they haven’t thought about it as carefully as I have.”

Kahn, who said she has seen the piece many times, said she doubts that the sculpture will be listed on next year’s audit of anti-Semitic incidents compiled by the council. The ADL’s Nasatir said he agreed with her prediction.

Shorewood officials and Plensa say they will soon come up with a decision on what to do next.

“The artist made the decision, with cooperation of the village, to temporarily remove the sculpture from public view,” states the email sent on Plensa’s behalf by Paul Gray, owner of the Chicago gallery, and Mary Sabbatino, who owns the New York gallery. “The artist is deeply grieved that anyone may be offended by the sculpture.… We are working with the Village of Shorewood, the artist and the donor to find a dignified and respectful solution for all.”

In a statement issued on November 23, the village of Shorewood said that, “In consultation with the artist, Jaume Plensa, his representative and the Village of Shorewood have temporarily removed the Spillover II sculpture from public view as a sign of respect to all.” The statement went on to say that the village will decide in the next few months whether or not to restore the sculpture.”

Either way, the question of Plensa’s intent will likely remain open for some time.

“My first reaction was really one of shock,” said Milwaukee attorney Alan Derzon, one of the many people who received a copy of Sweetwood’s blog post. “Now, I don’t know if was a coincidence or what.”

“You know,” added Derzon, who is Jewish, “you could put 500 monkeys at typewriters and come up with a Shakespeare sonnet.”

As for Sweetwood, he is standing firm in his decision to go public with what he saw.

A couple of weeks before his Milwaukee visit, he says he heard a Holocaust survivor speech during which the survivor noted the Nazi’s war on the Jews didn’t begin overnight. “There were little jabs against the Jews, rumors, gossip,” Sweetwood. Said.

The words that Sweetwood on the statue represented a minor slight,” he said. “But letting it go would be wrong.”

Cary Spivak is a reporter with the Milwaukee Journal-Sentinel.