Do These T-Shirts Make Me Look Jewish? 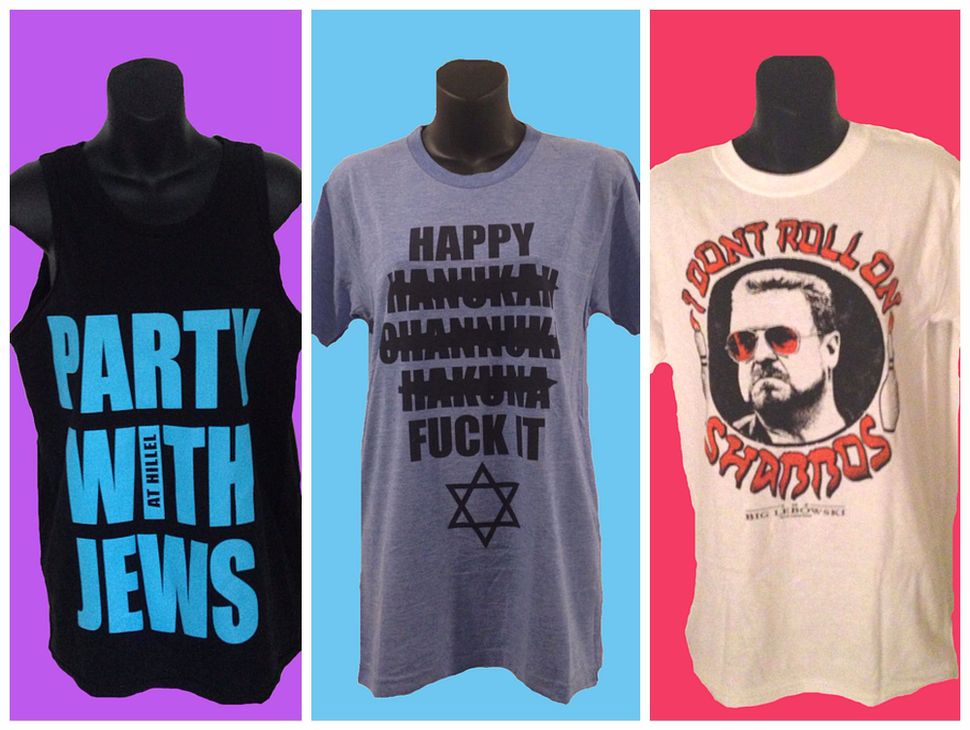 Anne Grant wanted to arrive early at the Center for Jewish History for the opening of her biggest exhibition to date. Her train from New Haven had run an hour behind schedule, and she rushed into the echoing lobby juggling a backpack, an overstuffed Longchamp tote and a blue water bottle. She has straight, mousy brown hair and was wearing dark-washed AG skinny jeans, black booties and a blazer. Her white T-shirt read “Matzah Ballin.”

At only 25, Grant has her hands full working to get her master’s from Yale Divinity School, presenting academic papers on Jewish identity and running her art exhibit and nonprofit, “Shmattes.” The title means rags in Yiddish, and the show explores what it means to be “culturally Jewish” in America, meaning those who might not observe Yom Kippur but still feel an attachment to their background.

Grant believes this demographic is largely snubbed by the rest of the Jewish population, which she said still views Orthodoxy as the most “authentic” form of Judaism, despite the fact that more than a third of Jewish Americans identify as Reform. Cultural Jews make up about 22% of American Jews and 32% of Jewish millennials, according to a 2013 Pew Research study.

“This is a very big segment of Jewish reality and why ignore it?” Grant asked.

Grant has curated a show of 38 provocative, humorous or pun-laden T-shirts that blend Jewish images or sayings with fraternity life, hip-hop and pop culture. One says “Jew-Tang” but uses the logo of the band the Wu-Tang Clan. Another shows an iPod playing “Drop It Like It’s Shabbat,” a riff on Snoop Dogg’s song “Drop It Like It’s Hot.”

Grant looks like someone who would identify as culturally Jewish herself, but when I asked her, she shrugged and said, “I guess.” Turns out she’s more ingrained in religion and tradition than her target demographic. She’s a millennial with an inclination toward Old World views. During our talk, she used both the term “Conservadox” and exclaimed, “nerd alert!” before discussing her paper “The Hebraization of American Jewish Identity through Hillel T-Shirts,” which she presented at the 2014 Association for Jewish Studies annual conference.

Grant grew up in a Catholic household in Philadelphia, and became involved in Jewish practices somewhat by chance, somewhat from a subconscious yearning, it seems. She was in her freshman year at the University of Virginia, a college she described as “waspy,” when she met a few Jews from Los Angeles in the cafeteria. They asked her if she wanted to accompany them to Shabbat at Hillel.

“I don’t know what either of those two words mean, but let’s do it,” she recalled thinking. It was her first exposure to Judaism. Since then, she said the religion has become a defining part of her life. She took a Hebrew Bible course and a Jewish history class “on a whim” and ended up majoring in Jewish Studies. She is now in the process of converting.

Grant began collecting T-shirts three years ago while waitressing at a wine bar in Philadelphia after college. A friend had given her a University of Pennsylvania Hillel sweatband that read “Just flick it.”

“It was like, ‘Oh that’s so typical of a Jewish institution to reference other cultures or idioms to get a point across,’” she remembered thinking.

She wanted to investigate this idea further. A Google search of “Jewish T-shirt” yielded shirts with sexually explicit sayings, drug references and appropriations from other minority groups. Over the years, she’s collected shirts from bars, Hillels and bar and bat mitzvahs. She now owns 175.

About nine months into her project, which was originally intended as a jumping-off point to conduct interviews about Jewish identity, Lucy Partman, arts curator at the Joseph Slifka Center for Jewish Life at Yale, approached her and asked her to turn the shirts into an exhibit.

“I felt I didn’t have the skills and the ability to run the show on my own,” she said, so she recruited five people for her board of directors, who include Stacey Ravel Abarbanel who’s worked at UCLA, Getty Publications and “Architectural Digest.” The board helped teach Grant how to write a catalogue, install a show, negotiate and even spell “shmattes.”

The exhibit, on view through March 15, is Grant’s first in New York City. “Shmattes” was previously shown at Yale, Brown and the University of Virginia.

On three walls in the Center’s first floor, the shirts hang on hot-pink hangers or are encased in wooden frames. At first, the show looks insignificant and a little sparse. Without understanding the history of “Shmattes,” the presentation can seem shallow, almost amateurish. But when one reads the labels alongside the shirts, the viewer can appreciate their significance. The labels introduce each cluster of shirts, and, more importantly, they challenge viewers, through rhetorical questions, to contemplate the message cultural Jews wish to send. The questions touch on the relationship between cultural Jews and Orthodoxy, other minorities, the shirts’ obscurity and their use of Hebrew.

I walked into the exhibit sure of my ability to pinpoint the pop culture references and puns. The first three shirts stumped me. They veered more toward the religious, and Grant intentionally lumped them together to test viewers.

One baseball-style tee said “Did you?” above a silhouette of a bench. I noticed, it rhymed with mensch, but that didn’t make sense. Are bench-pressing Jews a stereotype I didn’t know about? Grant explained the term “to bentsch” means to say a prayer after a meal, which she knows about only through her Orthodox friends. Another shirt read “I’m so Adonai.” I didn’t get that one either. I did get the fourth shirt in the group right away. It read “I’m Jewish, wanna check?” in Hebrew lettering with an arrow pointing down.

As the exhibit progresses, the sayings on the T-shirts become increasingly more provocative, particularly in the “hip-hop” and “postmodern” sections.

A violet shirt with three Manischewitz wine bottles stamped across the chest reads “Purple Drank,” a potentially dangerous mixture of soda and cough syrup – and codeine – that became popular in the 1990s. Another turns the Nike swoosh into what looks like a pipe smoked by a man wearing a do-rag-esque cap, although Grant thinks it is a white yarmulke. The tagline says “Just Jewish.” The label beside this “hip-hop” portion asks viewers to contemplate the ethics of appropriation, particularly when one minority group borrows from another.

Some holiday-themed shirts appear, including, “Jews do it for eight nights,” “Silent nights are so boring!” and Grant’s favorite, a green and white one reading “I heard there’d be Christian girls here.”

The exhibit ends with a display of various campus Hillel T-shirts. It attempts to stir discussion about how Jews represent themselves at college, but following the brazen and sexually explicit postmodern group, it feels like a weak grand finale. Instead, the point seems to be to explore the various ways cultural Jews use their own lifestyles to demonstrate identity.

“I’ve never been a believer in a homogenous environment. I think it needs diversity,” Grant said. Then she cocked her head. “Is that a cliché?” she asked.

The exhibit, which is presented by the American Jewish Historical Society is on display until March 15 at the Center for Jewish History • 15 West 16th Street New York, New York 10011.

Do These T-Shirts Make Me Look Jewish?