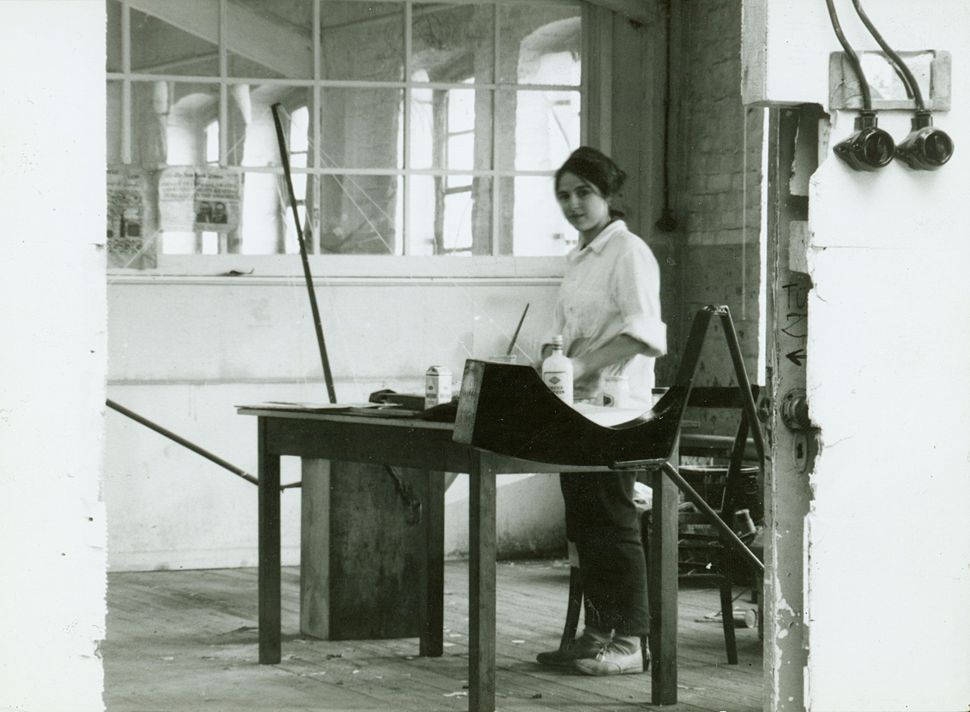 Only late in “Eva Hesse,” the new documentary about Eva Hesse’s art and her life, do we actually hear the artist’s voice. Part of an interview she gave to the art historian and writer Cindy Nemser, the audio recording is poignant, even haunting, given that by the time the transcript of the interview appeared as the cover story in the May 1970 issue of Artforum, Hesse was dying from a brain tumor. She was 34. (Hesse died while the magazine was still on newsstands, though she had the chance to see — and take immense pride in — the cover.)

Speaking of her art, Hesse confesses that there is a sensitivity in her work, a type of feminine sensibility (“if sensitivity means female,” she says in response to Nemser’s question, then yes, yes, her work is indeed female), that is also a form of strength. Her voice is possessed at once of lightness and of heaviness, the thrill of getting recognition tempered by the knowledge of her imminent demise. Or perhaps this is something one is tempted to hear in the voice, given that its backdrop is unavoidably tragedy. It is a voice coming as if from beyond, and anyone who knows Hesse’s story recognizes the history in the voice.

But the voice also recasts and troubles the story, at least as it is told in “Eva Hesse,” a film many years in the making, a true labor of love from director Marcie Begleiter. Like so many of love’s labors, it is both inspired and hackneyed, a celebration of transcendent vision that necessarily pales in the face of the artistry it chronicles. The film is, by and large, an examination of Hesse’s work, and it makes an admirable effort at restraint in the face of a biography ripe with the potential for sensationalism.

Hesse was born in Hamburg in 1936. When she was two, she and her older sister were sent to Holland on the Kindertransport. After six months in a Catholic children’s home, the girls were reunited with their parents, who took the family to New York. (When Hesse returned to Germany in the mid-1960s, accompanying her husband, the then-famous sculptor Tom Doyle, who had been invited to do a residency at the textile factory of Friedrich Arnhard Scheidt, she experienced it as “quite a trying scene…I was a ghost from the past.”) The young Eva was further traumatized when her parents separated, and her father quickly remarried. Her mother — given, in the documentary, a retroactive, posthumous diagnosis of bipolar disorder — committed suicide a year later, upon learning that her own parents died in a concentration camp.

Hesse herself experienced frequent bouts of depression: “There’s not been one normal thing in my life. Not one,” she writes in her diary, lines that serve as the documentary’s opening words. Her fears of abandonment and isolation were compounded by a tempestuous, deteriorating marriage, and her own sense of her artistry was marked by self-doubt (“I get so close, then change, destroy”) and the inevitable problem of being a woman artist in an art world dominated by men. Nonetheless, the artistry overpowered the things that would threaten it: Though her life was brief, and she only came into her own in its final years, moving away from the painting that never quite gelled as her medium into the sculpture that did, the work is astounding, both because it makes so much sense and because it makes so little.

Infusing minimalism with quasi-Surrealist absurdity, a sense of the idiosyncratically personal, Hesse’s sculptures suggest a state of near-disintegration at war with a post-apocalyptic perseverance. Featured as part of the 1966 “Eccentric Abstraction” show at the Fischbach Gallery, Hesse was one of a group of New York artists interested in transcending the rigidity of minimalism without descending into the cartoonishness of Pop Art: in working out the problem of form and matter by fusing the two. But more so than the other post-minimalists, Hesse brought her experiences — as a woman, a Jew, a person with a troubled past and a tumultuous love life — to the work, suggesting great pain without confessing anything. Her sculptures present a tortured, immense beauty and evoke, as in the fiberglass-and-resin stacks of “Repetition Nineteen III,” the lethal history of the 20th century, but they are also geometric games, the play of hard and soft, an exploration of toxic materials stripped of their industrial contexts.

Hesse’s recklessness with such materials — the raw matter of much of her breakthrough work — is hinted, in varying degrees, to be the cause of her illness. Certainly, she had her doubts about long-term survival, her own and the work’s too, since the materials she used would not, she knew, last. “I want what the effect is now,” she wrote of the rubber and fiberglass she used in deploying new processes. She was not concerned about future preservation, and that can easily be extrapolated into the suggestion that her own future was of little concern to her. “I would like the work to be non-work,” she said, hinting at transcendence, the state of being something and nothing all at once.

This is what comes through in Hesse’s voice, on the page certainly, in the voluminous diaries she kept, records that come in at nearly 900 pages in the edition that will be released in late May by Yale University Press and Hauser & Wirth, the gallery that represents Hesse’s estate. There is a kind of care in Hesse’s notes, in her plans and her anxieties, the thoughtfulness she puts into her art, which is hard to reconcile with a drive for (self) destruction. And yet the diary is filled with doubts, some frenzied, with sadness and effacement. You hear that tension in Hesse’s speaking voice, in the very brief moment it sounds in “Eva Hesse.”

The rest of the time, lines from the diaries and her correspondence, particularly with her father and her lifelong friend Sol LeWitt, are voiced by the actress Selma Blair. When Hesse herself speaks, there is a kind of accusation cast back on the film, a charge of falsification leveled at what is otherwise a good-faith effort to represent her achievement. And I’ll be honest: I don’t know how else those excerpts might be heard on film. But what Hesse’s work shows — quietly, fiercely — is the power of the reality that must, as she writes in one of her last diary entries, “get through.” What she sought to make in her final pieces, pieces wrought in the shadow of her mortality, was “non-planned, non-art, non-nothing.” When Hesse speaks, a certain falseness reveals itself and falls away.