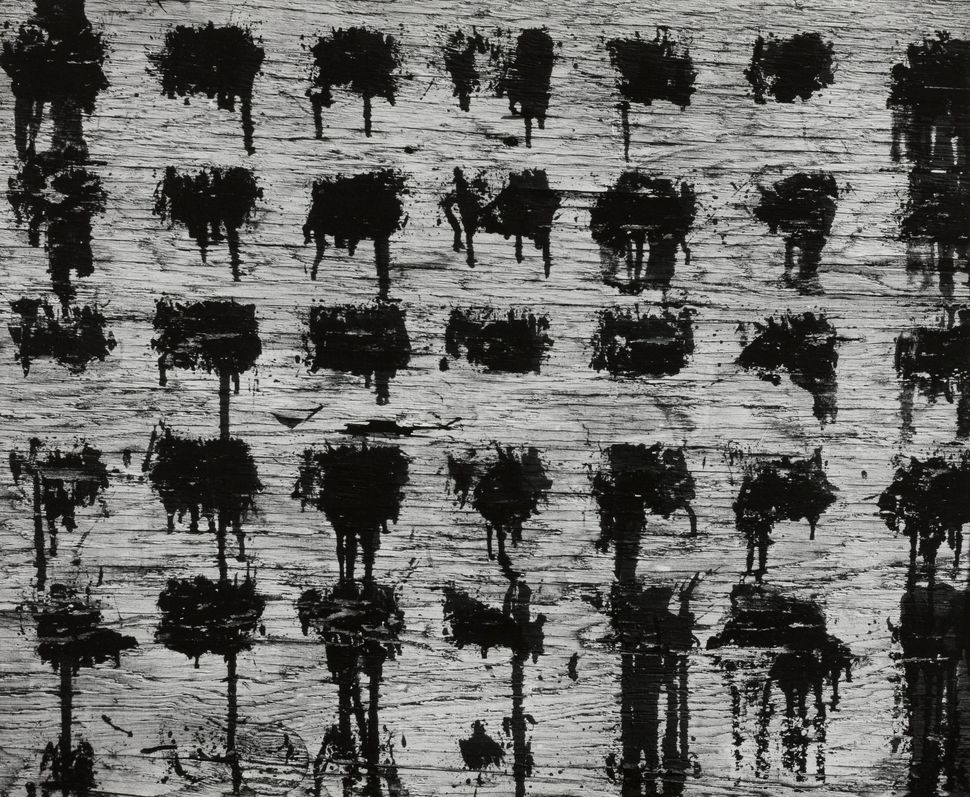 From now until August 14 at the Art Institute of Chicago, there is a quiet yet remarkable exhibit of 100 photographs by the American artist Aaron Siskind (1903-1991) taken from the Institute’s extensive holdings of his work. The work feels like a retrospective as the photographs show such breadth and range in his images, and the curators have chosen illuminating quotes from Siskind that are interspersed throughout the exhibit. Yet I couldn’t help but feel that if more biographical information had been included, including mention of his Jewishness, and even more writings from Siskind—who was a budding poet before he turned to photography and talks of his own art with a poet’s touch, and that of a Freudian psychoanalyst—viewers would be able to find even more meaning in the work, and it could help to elevate his name to its rightful status with his fellow Abstract Expressionists.

While Siskind started in the 1930s as a documentarian photographer with the Photo League he soon moved towards creating photos influenced by the burgeoning movement of Abstract Expressionism, whose painters he became close friends with when he lived in New York. The exhibition starts with Siskind’s photos from the 1940s, and begins with a quote by Siskind from a personal statement that accompanies his work in an exhibit of modern photography at the Museum of Modern Art: “First, and emphatically, I accept the flat plane of the picture surface as the primary frame of reference of the picture.”

The introductory notes tell us how revolutionary Siskind’s work was: “Now that abstraction is fully embraced by both painting and photography, Siskind’s work serves as a reminder that accepting the picture surface’s flat plane was once a radical gesture.” Siskind was tackling similar themes and ways of viewing art as Abstract Expressionist painters such as Marc Rothko and Franz Kline, whom he became close friends with, but unlike them he did not become a household name, because photography was not considered with the same regard as painting.

It’s fascinating to see here so many of Siskind’s varied works at once. The breadth of this exhibit allows one to notice the preoccupations and themes that run through his work. We see his close attention to objects such as his photos of rocks which seem sensate and sensual, as if they are engaged in intimate relationship with each other. The collective effect is to make us feel that we are steeped within his subconscious, feeling his thoughts and his vision of the world. 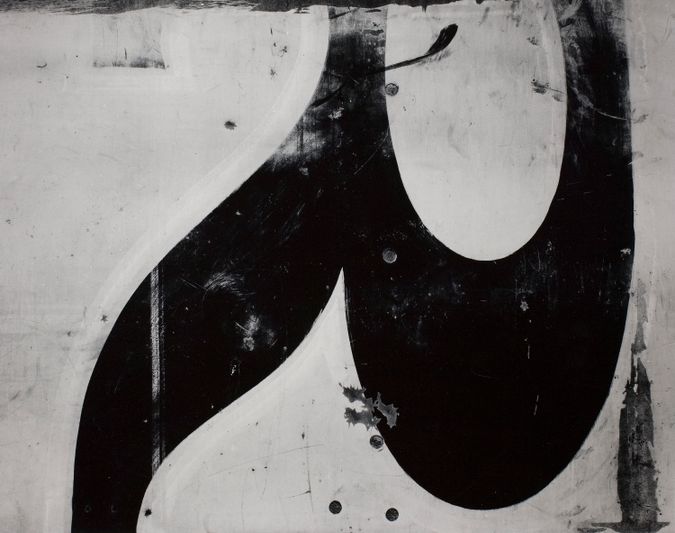 Chicago 30 1949: Photograph by Aaron Siskind. Image by Courtesy of Art Institute of Chicago

Another obsession is fragments of letters on walls, such as “Chicago 30 1949,” which shows a fragment of a bold black letter R on its side, pulsating with energy against a white backdrop, as if painted with a brushstroke of an abstract Expressionist. Time and time again Siskind makes the inanimate animate, investing objects with pathos and his own human feeling.

Notably, the exhibit does not directly mention that Siskind was Jewish, one of five children raised by Russian Jewish immigrants on the Lower East Side of New York. On the one hand, this makes sense: many Abstract Expressionists of the time, Barnett Newman, Gottlieb, Rothko, were Jewish but did not proclaim their Jewishness. The Abstract Expressionists’ choice to not make political or social statements in their art was as Gilles Mora writes in “Aaron Siskind, Another Photographic Reality,” “motivated by their own realizations that their past work had failed to change the world. Their response was to withdraw into the personal and to reexamine the person in relation to the world. And so it was for Siskind.”

Carl Chiarenza writes in his otherwise comprehensive insightful book on Siskind that “Religion as a source of ritualistic practice and belief had not been emphasized in his home. Attempts to introduce traditional observance on Jewish holy occasions had often turned into fiascos.” Yet viewing these photos and reading about Siskind made me wonder if we are missing something central to his work. Though Siskind did not speak publicly of his Jewishness or his reaction to hearing of the Holocaust as an American Jew, the subject matter and vision of his art seems a psychological reaction to the war and perhaps the Holocaust as well.

For example, the exhibit includes this quote from Siskind written in 1950, paired with his photograph “Kentucky 15 1951”: “When I make a photograph I want it to be an altogether new object, complete and self-contained, whose basic condition is order — (unlike the world of events and actions whose permanent condition is change and disorder).” Surely Siskind was alluding here to the events in the larger world— World War II and the Holocaust.

In the exhibit the curators have included a fascinating Siskind quote in which he directly mentions a connection between his Jewishness and his art. Accompanying the photograph “Chicago 224 1953,” an image which appears to have an exterior layer of random letters scrawled on it, this quote (from 1963) reads, “Of course, I have always been excited by the writing on the wall. I suppose it’s ever since I read the Bible and the whole business of the writing up on the wall… And because of my memory it’s rough Jewish writing. I can remember my father writing. I’ve always liked writings on the wall that become pure fantasy. It gives you sort of joy.” Here Siskind seems to delight in his Jewishness. This quote is so intriguing I longed for a statement to make sense of this quote or to give us more context. 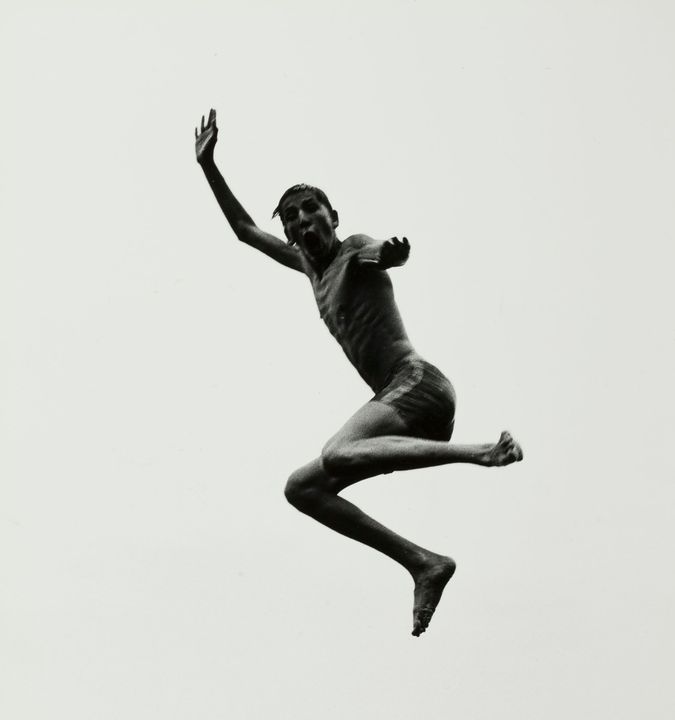 Pleasures and Terrors of Levitation 57: A photo by Aaron Siskind from 1956. Image by Courtesy of the Art Institute of Chicago

It also seems a missed opportunity for the museum to include other biographical information about Siskind. In particular, I read in “Pleasures and Terrors” of his first, early marriage to a young woman Sidonie Glatter, known as Sonia, whom he had befriended as a teen, also the child of Jewish immigrants, who then became mentally ill; she had to be hospitalized and the marriage disintegrated. In 1945 he sought an annulment. In the exhibit we see several photos from his Gloucester series. One, Gloucester 28 (1944) is an image with a curved piece of rope in the top right, and a frayed piece of rope ending in four pieces like the ends of a fork, on the lower left. A quote of his from 1945 is paired with this photo: “For the first time in my life subject matter, as such, had ceased to be of primary importance. Instead, I found myself involved in the relationships of these objects, so much so that these pictures turned out to be deeply moving and personal experiences.”

Surely the fact that in this very same year his marriage was annulled, his wife no longer the woman he knew and loved, was connected to his turning to portraying the relationship between objects, of two pieces of rope towards each other, and imbuing them with emotional meaning.

Learning more about his biography one can’t help but see his attraction to the limitation and restrictions of the rectangular space of the photograph, to seeking order in his images, as a way for him to seek relief from the unending anxieties and disorder of real life and real relationships.

Siskind wrote an essay in 1945 to accompany a spread of his Gloucester photos: “the meaning of these objects exists only in their relationship with other objects, or in their isolation (which comes to the same thing, for what we feel most about an isolated object is that it has been deprived of relationship. These photographs appear to be a representation of a deep need for order… Essentially, then, these photographs are psychological in character. [This] may or may not be a good thing. But it does seem to me that this kind of picture satisfies a need.”

Cleverly, the museum has put photos from the series “Pleasures and Terrors of Levitations” at the end of the exhibit, after one has viewed the other series. And seeing these figures set off on one wall floating in air feels like a revelation. It is the only time we have seen the human figure in the entire exhibit.

Here in each frame the figures are dark, almost black against the white background of the sky but each body is vital, strong. Siskind apparently was walking alone the lakefront in Chicago and saw these men jumping off a diving board into the water. The bodies have become abstract shapes, each appears like the fragments of letters Siskind loved to capture, each capturing a moment in time in which, as the title indicate, opposite dualities coexist—pleasure and terror, fear and joy. The Siskind quote that precedes the images is “The results didn’t particularly interest me until I looked at one that struck me. This guy was a diver, but he wasn’t a diver. He was levitating as if in a dream state, and then I knew what I was after.” These solitary figures are stand-ins for Siskind, the solitary, often lonely photographer. In these photos Siskind has managed to suspend time, to slow decay, to free us from external reality, to allow us to enter into this timeless floating dream state with him. The solitary figure in this series is a synecdoche for Siskind himself — for his art and for all art — escaping his loneliness by connecting with others through art.

*Laura Hodes is a Chicago-based attorney and freelance writer.”