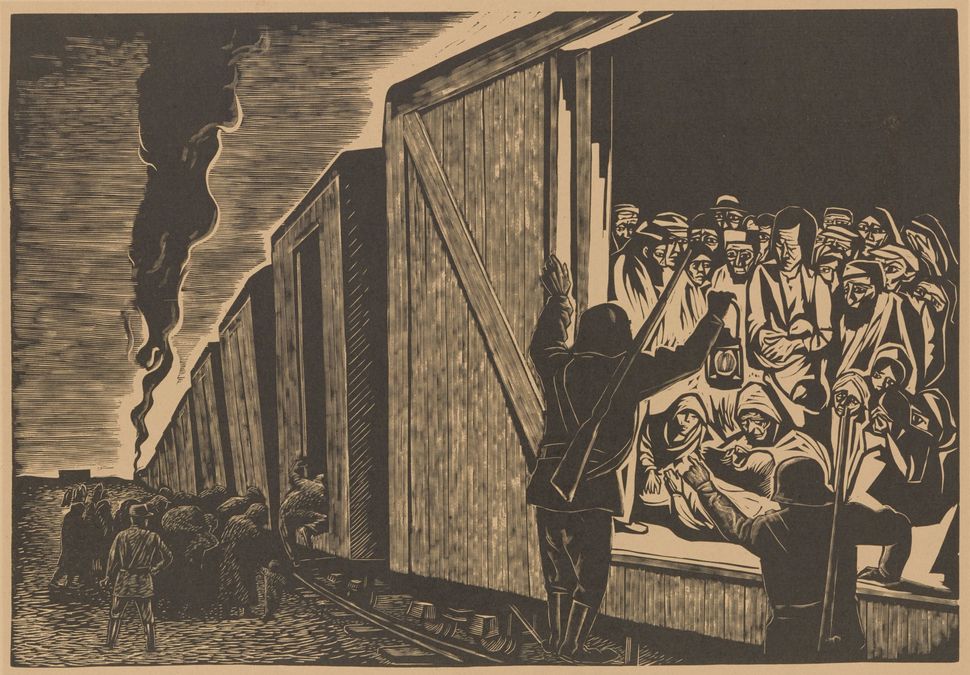 Deportation to Death, by Leopoldo Mendez Image by Courtesy Philadelphia Museum of Art

Velvet-black smoke pours out of a locomotive looming on the horizon, accentuating the train’s length. It ascends heavenward, but the smoke is no Exodus pillar of cloud guiding the Israelites. This ominous billowing form signals the train’s imminent departure, as armed Nazis herd people aboard. In the foreground, a burly soldier shines a lantern into a cattle car, illuminating a huddled mass of victims, some lying on the floor, as another Nazi points aggressively.

From a historical perspective, Leopoldo Méndez’s “Deportation to Death” is significant for at least two reasons. The 1942 linoleum print was an early portrayal of the death camps, and that depiction was published not in the United States — where the anti-Nazi works of artists like Arthur Szyk and comic book covers, such as one of Captain America famously punching Hitler, have received considerably more attention — but in Mexico City.

“It’s maybe the first, and certainly one of the earliest published and widely-circulated images of the death camps,” says Matthew Affron, curator of modern art at the Philadelphia Museum of Art. Affron is co-curator of the exhibit which includes Méndez’s print, “Paint the Revolution: Mexican Modernism, 1910-1950” (through Jan. 8) — a collaboration of the museum and Mexico City’s Museo del Palacio de Bellas Artes.

The Philadelphia Museum of Art website echoes Affron’s statement, as does that of the Art Institute of Chicago, which also owns a copy. “Méndez’s ‘Deportation to Death’ is perhaps the earliest print related to the Holocaust and the death camps,” the Art Institute notes. Affron admits the work depicts the train’s point of departure, rather than its destination of the camps, but the camps are implied, he says.

“He does represent the trains that transported Jewish people,” Affron says. “We can presume that Méndez was aware of the existence of the concentration camps though reports in the leftist press. In August 1942, a Mexico City journal reported on killings in the gas chamber at Auschwitz.”

“I find it very remarkable that it was made by a great, Mexican printmaker, because of this combination of Mexican and international forces that came together around the creation of that project,” Affron says of Méndez’s work.

The story of artists exiled from Europe landing in Mexico and producing works that responded so bluntly to World War II is an important one that hasn’t been told often enough, according to Affron. 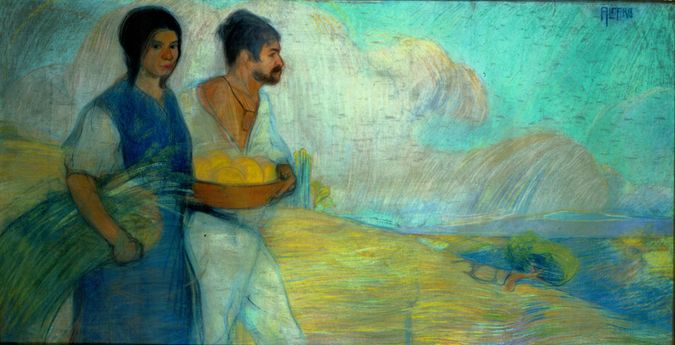 “Principled American viewers were looking to Mexico in this period for a reason. Mexico had created this remarkable tradition of a morally and politically principled modern art,” he says.

Mexican artists’ embrace of very accessible, quick media, such as printmaking, flyers, and leaflets, which could speak as a public art, set them up perfectly to be anti-fascist leaders. “It gave the Mexicans a kind of standing to respond in their art to the world situation. That was rather unique, and that was an example for people in the United States,” Affron says.

As is often the case with such malleable and rapidly produced media, there’s an inverse relationship between immediacy and shelf-life. Mexican artists’ political works in this period were ephemeral. “They’re rather rare now,” Affron says, noting that the Philadelphia Museum’s extensive collections in this regard are a “great legacy” of the institution.

“Some of them are difficult to find in Mexico,” he says. “That’s one of the accomplishments of this show.” (Another accomplishment: the many works from private U.S. and Mexican collections that the curators secured.)

In addition to lesser-known artists, like Méndez, the exhibit features better known contemporaries of his, such as Frida Kahlo and Diego Rivera. (A note on the Madison Museum of Contemporary Art website that Méndez ranks among Rivera, José Clemente Orozco, and David Alfaro Siqueiros may be somewhat wishful thinking.) Another lesser-known work, however, provides a telling contrast to Méndez’s print.

Wolfgang Paalen’s “Combat of the Saturnian Princes II” is a Surrealist picture that is the stuff of nightmares. Several skull-like forms — rendered in purple, yellow, blue, and red — are appended to various figures, or to a single figure, that “stands” in an amorphous dark space. The blue background, perhaps sky, is pale, and it’s easy to imagine the work as an illustration of the apocalyptic Four Horsemen, or a similar subject.

Paalen, whose father was reportedly Jewish but later converted to Protestantism, moved from his native Vienna to Rome and then to Paris, leaving for Mexico in the late 1930s. He painted “Combat” (in the collection of Mark Kelman) in 1938.

“It’s a very strange and dreamlike picture. It doesn’t refer to a particular combat but it certainly refers to the fact that we are in the immediate run-up to World War II,” Affron says. “I wouldn’t look to him for a direct response [to the Holocaust].”

Unlike many of the other artists in the show, who made direct statements about the war, Paalen sought to create a picture that would work on an imaginary level. “A kind of register of the climate of the times,” Affron says.

Although there was a Jewish community in Mexico City at the time, Jewish Mexicans weren’t particularly supportive of, or significantly involved in the anti-Nazi works being created at the time.

“Modern art, in a way, is an exile art. It’s an art that crossed borders. And artists, whatever their personal origins, are artists who go beyond the mainstream,” Affron says. “They are socially outsiders in their own way.”