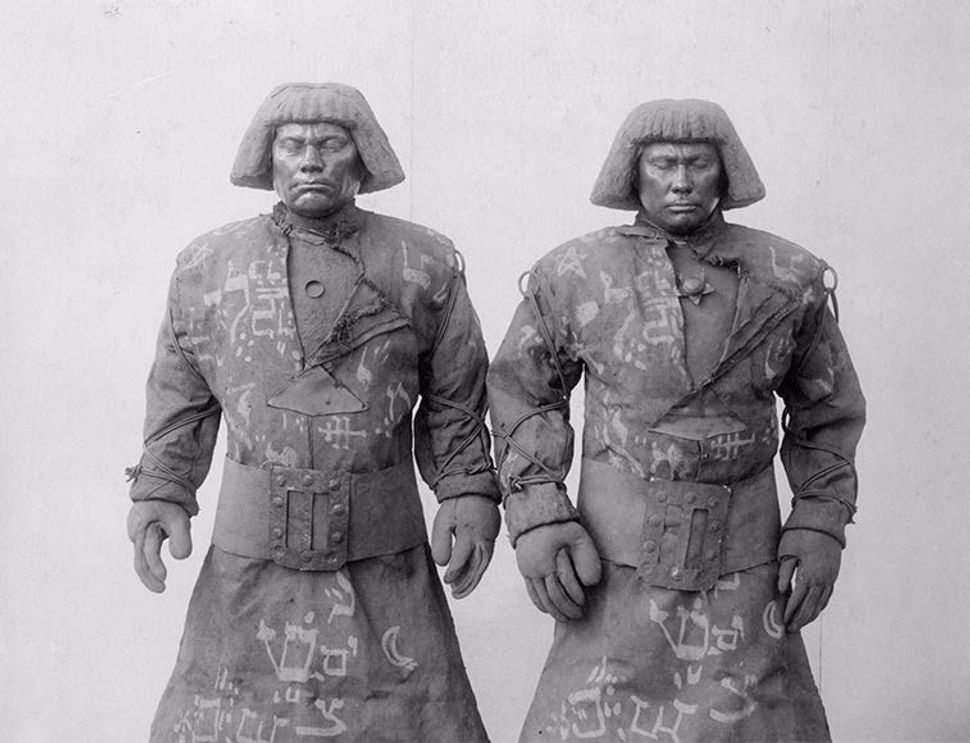 ‘It is said that the Golem lives everywhere and in all times,” wrote the Polish-Jewish writer David Frishman in 1922. Is Donald Trump the Golem of the current age? That tantalizing question is posed at the beginning of the Berlin Jewish Museum’s exhibit about Judaism’s folkloristic man of clay, starkly titled “Golem,” the name stripped of its article, as if to suggest that golem could be conceivably be adjective and verb as well.

Visiting the exhibit a week before the U.S. election, I was tickled to find one of Trump’s signature “Make America Great Again” baseball caps sharing a vitrine with an iPhone. The contemporary objects suggest two possible understandings of golem, with the best-selling smartphone standing in for the slew of digital avatars that threaten to substitute or subsume our identities and inner lives, while the emblazoned hat hints at president-elect Trump as a creature that has run amok of his creator(s). Meanwhile, so-called alt-right leader Richard Spencer has been quoted in The New York Times making reference to the mythical creature. Of political commentators, Spencer mused, “One wonders if these people are people at all, or instead soulless golem.”

In the Golem’s case, it was a holy name; in Trump’s, it’s a white baseball cap proclaiming “Make America Great Again’”

All things considered, golem is probably one of the more polite things one could call The Donald. For all I know, he might even take it as a compliment. Amusing though it is to find Trump propaganda/memorabilia at the Berlin Jewish Museum, the curators here are certainly not the first to propose a Trump-Golem analogy.

“Like the Golem of Chelm, the animated clay creature in Jewish folklore that grew uncontrollable and threatened the entire universe, Trump seems to gather power with every TV appearance and every crackpot speech,” the Canadian journalist Neil Macdonald wrote in September 2015, according to a quote featured in the display. “And like the Golem, he now threatens to crush his creator if any attempt is made to remove the magic, animating letters from his forehead. In the Golem’s case, it was a holy name; in Trump’s, it’s a white baseball cap proclaiming ‘Make America Great Again.’”

Sadly the notion of golem as avatar or projection of popular fears and desires isn’t taken up with any fervor in what follows. Instead, we careen from Rabbi Judah Loew, the legendary creator of the golem in 16th-century Prague, to Isaac Asimov’s “Three Laws of Robotics” to learning about the “Golem Aleph,” an Israeli-built computer from 1965, which was named by Gershom Sholem, to the 2000 sequencing of the human genome.

In recent years, the Jewish Museum has stepped up its game for temporary exhibits, including bold retrospectives of R.B. Kitaj (represented here with a 1980 “Golem” painting) and, more recently, Boris Lurie. There’s plenty about “Golem” to entertain and provoke, but the exhibit fails to coalescence or come into focus narratively or thematically.

The main problem is that “Golem” can’t quite decide what it wants to be. There are plenty of paintings and installations, but this isn’t an art show. Nor it is a show about science and technology; horror and science fiction; or religion and myth. In the end, the show so badly wants to make us aware of the multitude of meanings inscribed in “Golem” that it’s impossible to take anything away from it.

“All artists are Golem makers,” says the artist Tobi Kahn, whose totemic and abstract paintings are mounted alongside more straightforward depictions by David Aronson, Louise Fishman and Fritz Ascher.

“So what?” we’re tempted to ask as we move around the sleekly designed exhibition rooms, which are often filled with golem figures large and small and perplexing installations. It’s just another idea thrown casually at the viewer. Unsettling sculptures by Anselm Kiefer (a meteor-like lump of cement next to a fetus-like object in a jar) and the Spaniard Jorge Gil (realistic human figures emerging from hanging cocoons) number among the cleverer elaborations of the golem motif. A full-room installation of video, mirrors, drawings and text by the German artist Daniel Laufer is intriguing but would work far better in a gallery.

There are also some straightforward attempts at illustrating the golem myth, including Hugo Steiner’s expressionistic lithographs for Gustav Meyrink’s popular retelling from 1915. They are juxtaposed with Mark Podwal’s inked illustrations for Elie Wiesel’s 1983 book “The Secret of the Golem,” with Hebrew letters leaping from a burning book or swarming out of the tower of the Old-New Synagogue in the form of a human figure.

By far the most entertaining part of the exhibit deals with the cinematic legacy of the golem, starting with Paul Wegener, the German actor and director who adapted the legend of the golem for the screen no fewer than three times. The first two, a 1915 feature simply titled “The Golem,” and a 1917 parody called “The Golem and the Dancing Girl,” have been lost. Wegener’s 1920 film “The Golem: How He Came Into The World,” which he co-directed, co-wrote and starred in, is one of the classics of German Expressionist horror alongside “Nosferatu” and “The Cabinet of Dr. Caligari.” Although only posters, film stills and shooting scripts exist for —and are on display here — the earlier films, there are excerpts from the 1920 classic, with Wegener’s iconic clay helmet of hair, projected in a three-channel video installation by Stefan Hurtig and Detlef Weitz. In addition, a montage of more than 60 films features golemesque imagery from “Fantasia” to “Ghost in the Shell” and from “Metropolis” to “Ex Machina.” (As a side note, this mesmerizing loop wouldn’t be out of place in the German Film Museum’s current science fiction film exhibit, “Things to Come.”)

I’m not sure how long the full montage runs, but I would have been glad to spend all day immersed in it. At it was, there are still three or four more galleries of mixed media to slog through, which didn’t provide any compelling thematic or narrative trajectory.

And despite the show’s attempt to be comprehensive, I found that I reached the end wondering about so many unanswered questions. For instance, what would the golem say if he could speak? Does he feel remorse for the violence he was forced to commit?

“The Simpsons” proved far more insightful in “You Gotta Know When to Golem,” a segment on its Treehouse of Horror XVII Halloween Special, which is duly excerpted in the Hurtig and Weitz montage. “Of course I feel bad,” Bart’s golem tells Lisa, who senses that the mythical Jewish defender is actually riddled with guilt. “My stomach feels like it’s hosting the Chabad telethon and Norm Crosby’s going long!”

‘Golem’ runs through January 27, 2017 at the Jewish Museum Berlin

A.J. Goldmann writes about European arts and culture. He is a longtime contributor to the Forward.