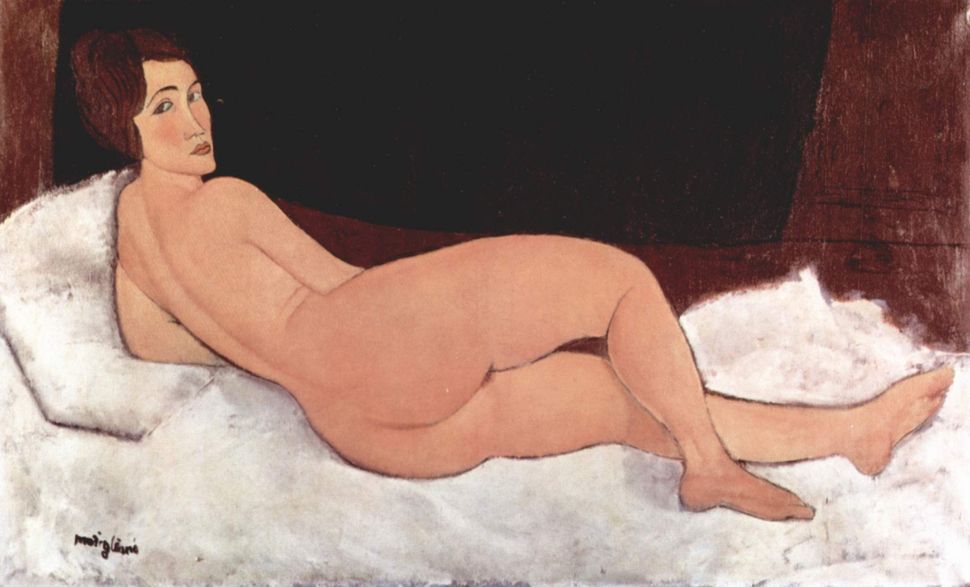 Image by The Yorck Project/Wikimedia Commons

The works of Jewish-Italian modernist painter Amedeo Modigliani are beloved by art critics and libidinous undergrads alike, but they hold a special allure for a less desirable audience: Art forgers.

For Artnet, Lorena Muñoz-Alonso recently looked into the proliferation of fraudulent Modiglianis, which reached a scandalous apex in June when an exhibition featuring the painter’s works at the Palazzo Ducale in Genoa, Italy was closed early after prosecutors alleged that 21 of the works on display — about a third of the exhibit — were forgeries.

The show’s curator, Rudy Chiappini, was placed under investigation. He maintains that the paintings all had proper documentation.

Born into a Sephardic Jewish family in Livorno, Italy, Modigliani found artistic success in bohemian Paris. Though beset by poverty, illness, and addiction, he was prolifically creative and carried on several passionate love affairs. His dramatic and well-known life story has become part of his allure, inspiring multiple romantic films. And his paintings, with their pared-down graphic elegance and untroubled eroticism, remain some of the most accessible in modern art

Those paintings, in constant demand since his death, have recently fetched mind-boggling sums. In 2015, Chinese oligarch Liu Yiquan paid $170.4 million for the painter’s 1917 painting “Nu couché” (“Reclining Nude”), then the second-highest amount ever paid for an artwork at auction. This fall, museums including London’s Tate Modern and New York’s Jewish Museum will be putting on major exhibitions of the painter’s work. In the wake of the scandal in Genoa, they will likely find the issue of authenticity to be all the more pressing.

Modigliani’s popularity and salability makes copying his work a potentially high-reward gamble for an able forger. The streamlined forms and relatively restrained palettes of his paintings appear attractively simplistic, but as Jeanne-Bathilde Lacourt, curator at the Lille Métropole Museum of Modern, Contemporary, and Outsider Art, told Artnet, “Of course…they are much harder to fake than what you’d think, and many fakes are in fact incredibly obvious.”

Yet the task of identifying a true Modigliani is complicated by deficient catalogs of the artist’s work.

According to Muñoz-Alonso, most painters have just one catalogue raisonné – the authoritative record of an artist’s work, including scholarly commentary – while Modigliani’s ouvre has produced six. The most respected catalogue, most recently updated in 1970, was compiled by Italian appraiser and critic Ambrogio Ceroni. French art historian Marc Restellini is planning to release a seventh version in the next year or so, adding 78 more works to Ceroni’s.

Restillini’s project has proven controversial enough to earn him death threats. According to Muñoz-Alonso, Restillini’s catalogue would be a boon for owners of the newly-authenticated pieces, while owners of Ceroni-certified works fear that an increase in verified Modiglianis might devalue their own properties.

Early next year, an accomplished team of scholars will use scientific techniques to develop a more definitive rubric for determining the authenticity of Modiglini’s work. These will include x-ray and infrared imaging as well as molecular samples that will identify materials that were not available to the painter during his lifetime.

“No approach can be the only one,” Lacourt says. “They are all important.”

Daniel Witkin is the Forward’s Arts and Culture Intern. Contact him at witkin@forward.com or on Twitter, @dzwitkin.