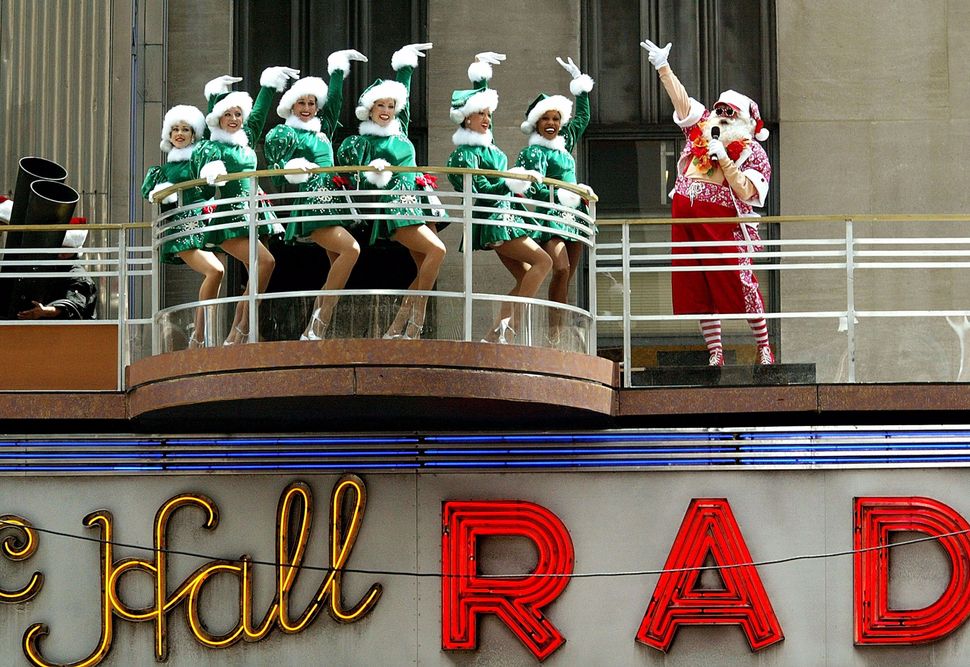 The Rockettes Image by Getty Images

Is there anything more goyish than the Rockettes, the “precision-dance” troupe best known for its starring role in the annual “Christmas Spectacular” at Radio City Music Hall?

As it turns out, the entire creative team behind the annual Radio City holiday event, which began in 1932, were Jewish men brought together by Samuel “Roxy” Rothafel, who helped create the music hall after a successful career managing great Manhattan movie palaces, such as the one that bore his name. These theaters also featured live entertainment, including a dance troupe called the “Roxyettes,” whose name would change when their home base moved from the Roxy to Radio City Music Hall at Rockefeller Center. Rothafel’s co-creators of the Christmas Spectacular included producer/choreographer Leon Leonidoff (who persuaded Rothafel to bring the St. Louis-based dance troupe the “Missouri Rockets” to Manhattan in the first place); composer Charles Previn; conductor Erno Rapee; and Russian-Jewish immigrant David Sarnoff, the president of the Radio Corporation of America (RCA) — the corporate sponsor behind the scenes.

The Rockettes were the stars of that first Christmas pageant, and have been ever since. Two of their best-known production numbers — the only two that are repeated every year — were created by Leonidoff: “The Living Nativity” — which for years included live camels and elephants — and “The Parade of the Wooden Soldiers,” based on music written in 1897 by German-Jewish composer Leon Jessel. The 1932 debut of the “Christmas Spectacular” also included a performance by operatic tenor Jan Peerce, born Jacob Pincus Perelmuth. Peerce came to his name through a series of stage names, including Pinky Pearl and John Pierce, the latter supposedly suggested by Rothafel.

Leon Leonidoff would preside over every stage show at Radio City until his retirement in 1974. He also developed the traditional Easter pageant (“The Glory of Easter”) as well as a short-lived “Kol Nidre” stage show for the High Holidays. Composer Charles Previn — son of a Brooklyn rabbi and great-uncle of pianist and conductor Andre Previn — wrote original music for the programs, and Erno Rapee, the Hungarian-Jewish conductor also brought over by Roxy from the Roxy, led the Radio City Symphony Orchestra from 1932 until his death in 1945.

Even the shoes the Rockettes wore had a Jewish connection. They were made by Capezio, a company co-owned by Estelle Sommers, who transformed her first husband’s Cincinnati fabric store into a dancewear specialty shop. Later she married Ben Sommers, who ran Capezio Ballet Makers, whose shoes were (and still are) worn by the Rockettes.

Over the years, the Rockettes have featured several Jewish dancers whose stories stand out. Christine Frances Masave Horii, a fourth-generation Japanese-American, was born in Honolulu in 1968. She moved to Los Angeles, where she worked as a dancer in music videos and onstage in pop concerts by Jody Watley and Belinda Carlisle. She then moved to New York City and became a Rockette. Before she married TV commercial producer Todd Factor, Horii underwent a Conservative Jewish conversion. In time, the Factors became more traditional: Todd became Tuvia, Christine became Rachel Factor, and they moved to the religious Sha’arei Hesed neighborhood in Jerusalem. Today, she chooses to dance only before all-female audiences.

In the Forward in October 2003, Steven I. Weiss profiled Rhonda Kaufman Malkin, who became a Rockette in 2001. When the group toured, Malkin opted for the home hospitality of the local Jewish community rather than staying in a hotel. “I really consider myself a woman who lives in two different worlds… my show-business world and my religious world,” Malkin told Weiss, adding that she would light Hanukkah candles backstage before shows that occurred during the eight days of the holiday. 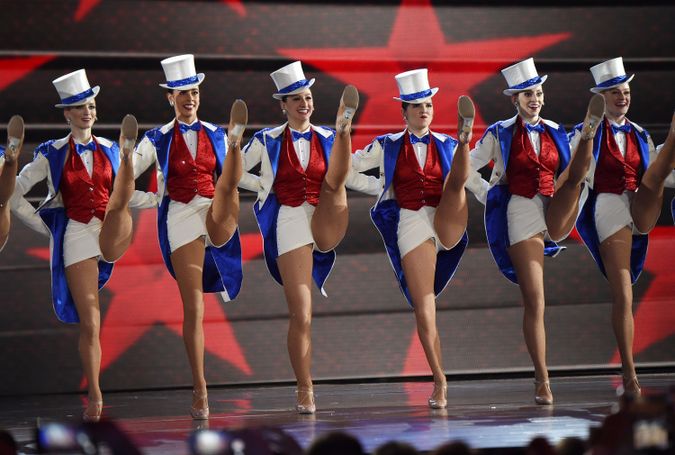 Rockette Megan Levinson also attracted attention for lighting candles backstage when the New York Post picked up her story in December 2014. Levinson told the Post she was bringing a Hanukkah menorah she had purchased on a trip to Israel the previous summer plus dreidels and Hanukkah gelt backstage at Radio City to celebrate during the holiday. Levinson, a New Jersey native, told an interviewer in 2015, “My family always went to see the Christmas Spectacular, even though we’re a Jewish family — but the show is for everyone.” At age 11, Levinson auditioned and was cast as Clara, the only child’s role, in the “Christmas Spectacular.”

Incidentally, the 1986 “Christmas Spectacular” was filmed by HBO for a movie version that never was released. That year the pageant was hosted by singer-actor Joel Grey, born Joel David Katz, best known for his role in both the stage and film versions of “Cabaret.”

Most recently, the Rockettes were back in the news when several members of the corps refused to perform at the inauguration of President Donald Trump. The controversy was kicked off by an anti-Trump Instagram post by Rockette Phoebe Pearl, who told me she is Jewish on her father’s side of the family. Pearl and several other dancers dropped out of the performance, which found the remaining Rockettes dancing to a medley of songs by a Russian-Jewish immigrant songwriter named Israel Beilin. That’s Irving Berlin to you.

Seth Rogovoy is a contributing editor at the Forward who regularly mines popular culture for Jewish themes and correspondences.