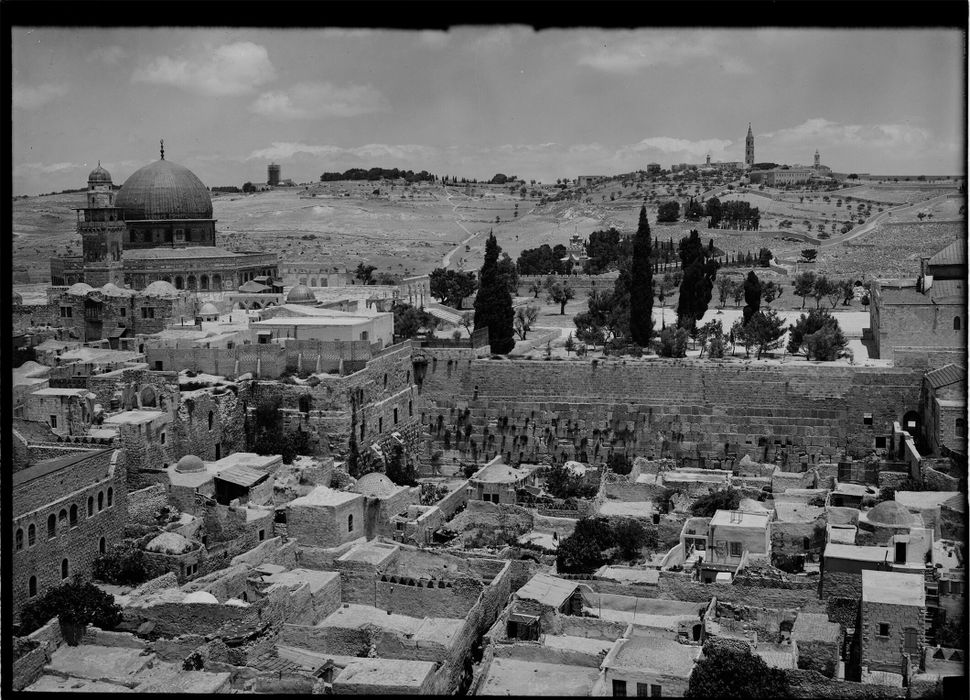 Midway through the Jewish Museum Berlin’s exhibit “Welcome to Jerusalem,” a sprawling tour through the Holy City, one finds a particularly unsettling image. No, it isn’t an especially gruesome crucifixion, a battle scene of the Crusades or a photograph of carnage after a terrorist attack. The offending picture shows Israeli Prime Minister Benjamin Netanyahu gripping the hand of a scowling Donald Trump at the King David Hotel in Jerusalem during his first trip abroad as president of the United States in May.

Days before the exhibition’s opening, on December 10, 2017, President Trump formally recognized Jerusalem as the Israeli capital and ordered to move the U.S. Embassy there from Tel Aviv, a controversial diplomatic decision that gives the Jewish Museum’s show added relevance and urgency.

“Welcome to Jerusalem” is a robustly curated tour through a city “saturated with prayers and dreams,” in Yehuda Amichai’s memorable phrase. It is also something of a gamble for the museum — the permanent collection has just closed for a complete and long-overdue overhaul that will last until 2019. So, now the Jewish Museum is yet another popular site in Berlin that is now only partially accessible. 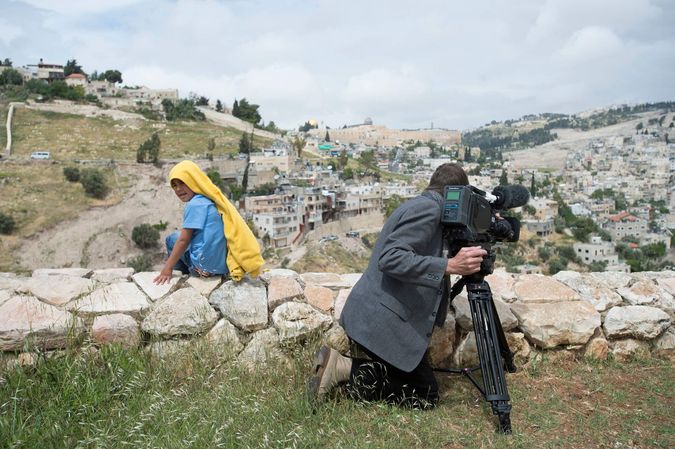 A still from the film “24 Hours Jerusalem.” Image by Jewish Museum Berlin

Spread over nearly 11,000 square feet of exhibition space in the museum’s old building, the temporary show impressively charts Jerusalem’s history from the Second Temple to the present, from Jewish, Muslim and Christian perspectives. But will the marvelous loans from the Victoria & Albert Museum, Tate Modern, the Musée du Quai Branly, the Uffizi Gallery and the Israel Museum, and the frank discussion of the Palestinian Naqba, be enough to sustain visitor interest over the next year and a half? (The show remains on view until April 30, 2019, and the new permanent collection is expected to open at some point that year — although in Berlin, one should never hold one’s breath).

Tourists flock to the Jewish Museum Berlin for two reasons — to experience Daniel Libeskind’s dazzling architecture and to get a crash course in the history of Jews in Germany. But can an exhibit about Jerusalem prove an enticing alternative for those hoping to learn about Jewish life in this symbolic and historically weighted city? To pose a somewhat obnoxious, yet to my mind obvious, question: Why should people come to Berlin to see a museum exhibition about Jerusalem?

One answer proclaimed loudly by the curators through their decision to include so much of the Palestinian narrative is that such a show would never be seen in Jerusalem itself. While the decision seems bound to court controversy — which is almost always a good thing for a museum — it doesn’t seem reason enough for an 18-month-long “Reise nach Jerusalem,” German for “Journey to Jerusalem,” which is strangely what the game of musical chairs is called here. Theories abound as to the unusual name: It possibly refers to the high number of casualities during the Crusades; another explanation makes reference to the restricted number of ships during the Zionist migrations to Palestine.

The timeline of the Berlin exhibition begins much earlier than either, with the Second Temple (20 B.C.E. to 70 C.E.) springing to life in the interactive media installation, “Augmented Temple.” Berlin-based ART+COM Studios designed this scale model of the temple, across which flashes explanatory text while ant-like figures scurry, suggesting the vast dimensions of the Temple Mount complex and the droves of pilgrims and worshippers it welcomed. Four augmented reality viewers that point at the illuminated model depict various activities in the temple, including sacrifices, ceremonial dances and money changing. Close by, we find a historic replica of the “Spoils of Jerusalem” relief from the Arch of Titus. The temple returns as a theme much later, with a display detailing recent efforts to find a red heifer and other harbingers of the Messiah, as part of a gallery devoted to radical contemporary religious movements grouped under the wonderful heading “Pious Protests.” 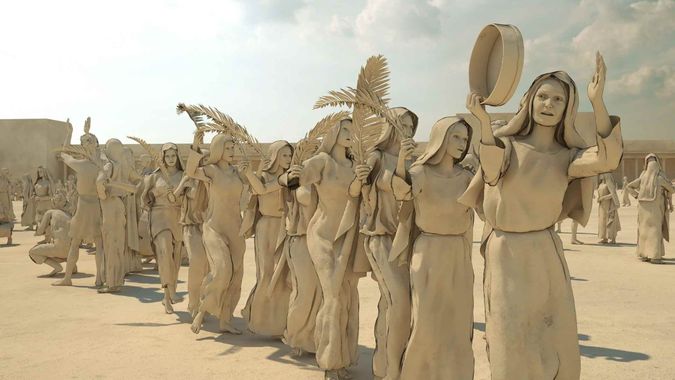 An image from the exhibit “Augmented Temple.” Image by Jewish Museum Berlin

The exhibit fills the intervening two millennia with discussions of Jerusalem’s holy sites and their significance for Judaism, Christianity and Islam. The extensive trove of objects and documentation of The Church of the Holy Sepulchre — built in 330 by Constantine, damaged by the Persians in 614, destroyed by Muslims in 1009 and reconstructed starting in 1160 — is probably the show’s most successful sustained chapter. The gallery’s centerpiece is a magnificently intricate wood, mother of pearl and bone model of that church in the 17th century. Although no larger than a stack of books, it is far more impressive than either Conrad Schick’s massive table top model of Haram al-Sharif, the site of the Al-Aqsa Mosque and the Dome of the Rock, from 1879, or the extremely realistic cork model of the Western Wall specially commissioned for this exhibit.

There are, on the whole, fewer splendid objects in the show that help to examine the importance of Jerusalem to Islam. Two of the most striking come from Persia. An engraved brass Qibla Compass from the 18th century, used to determine the direction of prayer, is displayed in the context of the discussion of a minor pilgrimage to Jerusalem. Sayyid Arab’s fantastical lithograph “The Ascension of Muhammad” (1940/60) is a vibrant storybook rendering of the prophet’s “Night Journey,” the legend that established the sanctity of Jerusalem in Islam.

Yet the Muslim narrative and claim on Jerusalem emerges most strongly in this show, starting with the British Mandate of Palestine and leading right up to the present day as Palestinian protests against Washington recognizing Jerusalem as Israel’s capital persist.

The disenfranchisement and occupation of the Palestinian people is presented as an integral part of the history of the Jewish state from its founding. While narrating the young country’s triumphs and tragedies, the films, photographs and works of art presented in the show’s later rooms do not shy away from discussing the forced expulsions and massacres that preceded Israel’s semipermanent occupation of over nearly 3 million Palestinians within its borders. This clear-eyed, balanced and unsparing account of Israeli history vis-à-vis the Palestinians is the exhibit’s most courageous part. It is impossible to imagine a Jewish museum in America — or possibly anywhere else — presenting the Palestinian point of view so sympathetically.

In the epilogue to the exhibition catalog, longtime activist and Israel expert Daniel Seidemann writes, “However inspired and burdened by its past and its sanctity, Jerusalem is also ‘just a city,’ where sewage obeys neither scripture, the PLO covenant nor the laws of Israel. Overpowered by myth and symbol, mundane Jerusalem rarely receives the attention it deserves.”

Amichai’s air “saturated with prayers and dreams” also fills with garbage, exhaust and dirt. The Jerusalem that emerges over the course of the exhibit is certainly not the idealized city on a hill depicted in the German and Dutch engravings from the 17th century, or in the Orientalist pictures of David Roberts and Max Rabes featured in the exhibition. Yet “Welcome to Jerusalem” never quite shakes off the view of the city as anything other than the stage for epic spiritual and political struggles that have shaped, and continue to shape, our world. I’m pretty sure a contemporary Jerusalemite would not recognize him or herself in this presentation. If, like me, you are fascinated by the chaotic beauty and intensity of “mundane Jerusalem,” skip the show and book a flight to Israel.

A.J. Goldmann is a Berlin-based journalist and critic.

“Welcome to Jerusalem” will remain on view at Jewish Museum Berlin until April 30, 2019.