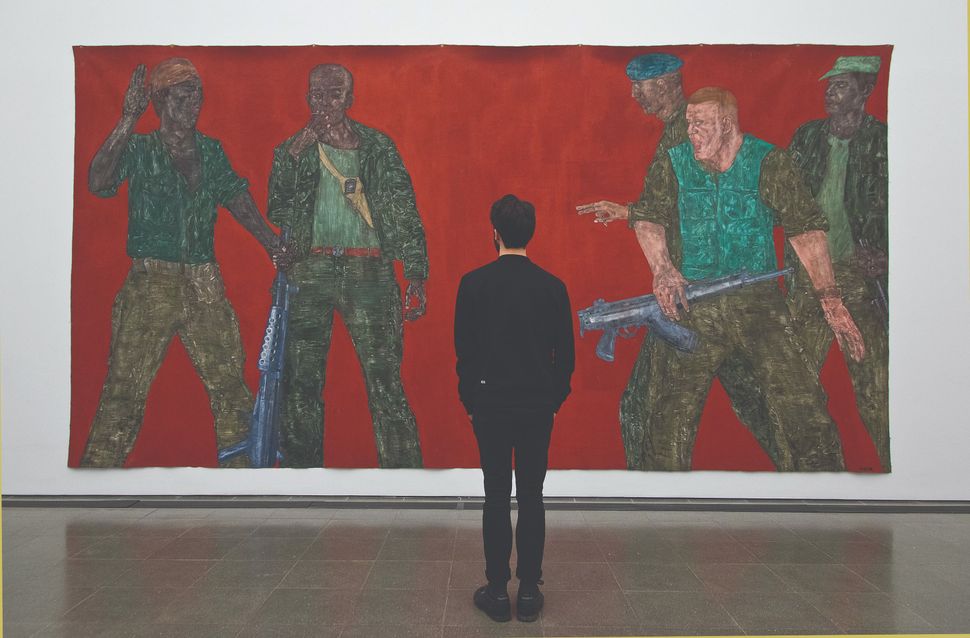 In his obituary in the August 12, 2004, issue of The New York Times, Leon Golub is described as “an American painter of expressionistic, heroic-scale figures that reflect dire modern political conditions.” His new exhibition at the Met Breuer, “Leon Golub: Raw Nerve” suggests the artist’s vision — violent, cruel, red in tooth and claw, presciently damning of toxic masculinity. The exhibition’s title is taken from a line in a 1986 essay by Golub: “Artists manage extraordinary balancing acts, not merely of survival or brinkmanship but of analysis and raw nerve.” The new show is centered on the stunning, unsettling, massive 1966 painting “Gigantomachy II,”and reintroduces us to a Jewish painter who resisted the political and aesthetic tendencies of his own moment (and so never became a household name) and who (despite, or more likely because of, this) produced an eerily reflective, insightful body of work: insistently ethical and visually and emotionally compelling.

In an expressionist blend of blues, grays and muddy, bloody reds, “Gigantomachy II” depicts the struggle between the gods and the giants of Greek myth. The violence within is reproduced by the violence without; the gashes and slashes of the paint’s application on untreated, unstretched linen echoing the primal battle at hand; the silent wrestling matches of towering men, stripped of clothes, adorned by only pride and enmity. (Golub typically achieved his desired effect by scraping away layers of applied paint, occasionally with a meat cleaver.) There is a sense here that this clash is at once consequential and utterly without meaning, driven by an internal logic that has long ceased to make sense to its participants and to their audience. As is also true of much of Golub’s work, the painting carries an implication of some secret knowledge — suppressed, buried, nearly but not quite conquered. It’s a truth that threatens to erupt, to destroy; it carries no comfort. Golub’s art is meant to jolt. It punches you right in the face, then right in the gut. These are not history paintings, though they sometimes do depict historical figures. These are nightmares that never stop — have never stopped — being the present.

Golub received a Master of Fine Arts from the School of the Art Institute of Chicago. But there is something insistently untutored about his art; the flatness of his colors; the deliberate crudeness of his figurations, which render figures recognizable yet deformed. (Is this what the past, which is of course not even past, does to us?)

Golub’s work has a certain childlike quality, even if one would hope a child would be spared such visions. Still, there is an innocence — a purity — in his work, for in it the artist insists on looking and on seeing, insists on a moral rigor and clarity. “Gigantomachy II” was made two years after Golub became a member of the Artists and Writers Protest Group and began actively campaigning against American involvement in Vietnam, and “Raw Nerve” includes the 1970 painting “Vietnamese Head,” which shows a disembodied head evocative of unspeakable torture.

But Golub’s indictment of man’s cruelty to man goes further; he devoted his attention to victims of political and socioeconomic violence, whether explicit or implicit, as in the quietly devastating 1986 painting “Two Black Women and a White Man.” At once specific and broad, Golub’s work serves as a visual reminder that injustice anywhere is injustice everywhere. Golub’s figurative work positioned him at odds with prevailing artistic movements. Looking at the paintings now, it’s hard not to see them as protests lodged against aesthetic norms, against cruelty, against banal and major catastrophes.

Acutely aware — as how could anyone actively observing the 20th century not be? — of the violent sleights of hand that (still) continue to take power from the powerless, of the clashes among the powerful, the artist documented the carnage. The results are raw, unfiltered; they took nerve.

“Leon Golub: Raw Nerve” runs through May 27, 2018, at the Metropolitan Museum of Art in New York.