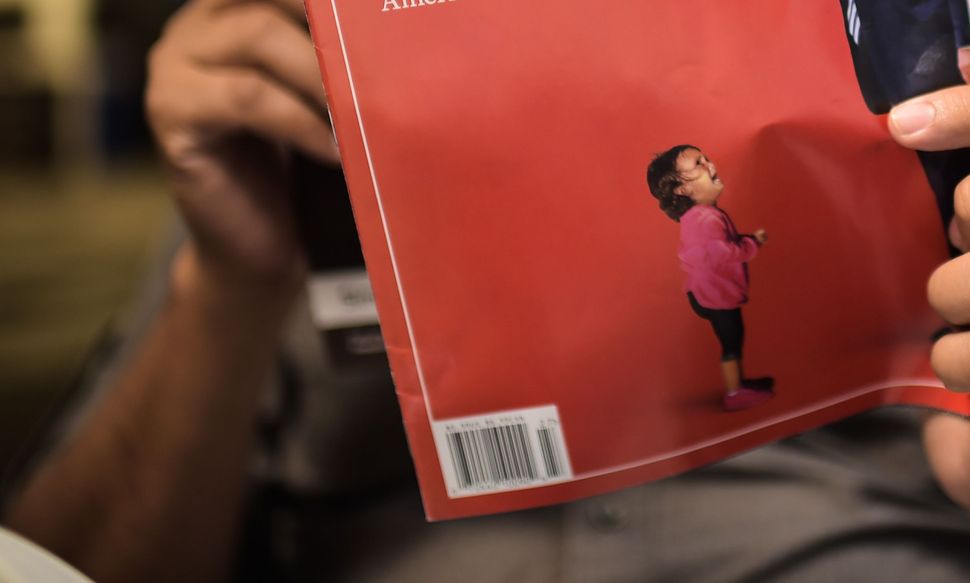 On August 12, 1958, the photographer Art Kane positioned himself on the south side of East 126th Street and shot a photo that would become iconic. Kane was on assignment for Esquire, which was preparing an issue on jazz, and he had gotten the most remarkable talent in Harlem to assemble for the occasion. Sonny Rollins and Count Basie were there; so were Dizzy Gillespie and Charles Mingus. “A Great Day in Harlem” became a symbol for a golden age of jazz, and specifically a golden age of black jazz musicians.

This week, Netflix debuted the most recent in a long series of cultural homages to “A Great Day in Harlem,” a headline-making photo of its black actors, directors, writers and creators titled “A Great Day in Hollywood.” The picture made for an interesting juxtaposition with the other most attention-grabbing photo of the week: That of a tiny immigrant girl sobbing at the border, which Time Magazine repurposed for the cover of its July 2 issue. On a flat background, the cover situates the girl at the feet of a looming President Trump, who looks down at her dispassionately. Far from earning accolades, as “A Great Day in Hollywood” largely did, the Time cover has come under intense criticism. The New York Times revealed that the little girl pictured was not separated from her family, as the cover’s accompanying article originally suggested, and Time issued a correction. Media on both sides of the political aisle lambasted the choice to use the girl’s image for a story that capitalized on broad outrage about Trump administration policies that led to family separation.

We’re not a genre because there’s no one way to be black.
We’re writing while black.
Nuanced and complex.
Resilient and Strong. #AGreatDayInHollywood

Together, those images — both highly staged, one in person, one in Photoshop — tell an interesting story about what kind of institutions, in 2018, have the means to advance cultural narratives. Despite its recent investments in prestige movies and television, Netflix is publicly understood to be a site of guilty pleasure. Time has historically been a powerhouse of the American print media, a sometimes-gossipy publication that nonetheless delivered hard news. And yet in the case of these two notable photographs, the two outlets have found their places inverted. Here Netflix is the site of meaningful ideas, and Time, which continues to defend its cover, the site of guilt.

There are a number of possible explanations for this inversion; one has to do with the companies’ different approaches to an increasingly common means of generating audience. Specifically, the two images frame a unique picture of the ways in which diversity and social justice, especially given President Trump’s cartoon-villain malevolence toward pretty much every marginalized group, are increasingly seen as surefire tools of marketability for a significant sector of American society. Time’s error and Netflix’s success stem from the same instinct: To sell something by claiming an ethical high ground. Time, in its circuitous reasoning for using the girl’s photo — “We chose the photo because this little girl became the face of this story on front pages and home pages and TV screens and Facebook feeds,” Time editor-in-chief Edward Felsenthal told CNN — unwittingly exposed that impulse’s fundamental cynicism, its willingness to use the plight of the disadvantaged for profit. But Netflix showed the possibility of a more productive outcome.

In the United States, the road to progress has always been engaged with the concerns of businesses, from the Boston Tea Party to the lunch counter protests of the Civil Rights Movement to contemporary calls for advertising boycotts of Fox News. This fact has been made most evident, in recent years, by the ways in which corporations have carefully started to appear to support Pride: Signage reappears in rainbow, businesses pledge to donate some profits to LGBTQ causes, and brands release enthusiastically bland special merchandise. (See: A Levi’s Pride collection for Macy’s that advertises shirts bearing the tepid slogan “Fight Stigma.”)

Where the Time cover evidently aims for no particular outcome aside from that of creating shock, Netflix’s restaging of “A Great Day in Harlem” is an explicit buy-in to the economy of progressivism. It acknowledges both that progressive gains in a capitalist system inherently rely on economic acceptance and that, at a certain point, economic success comes to rely on an embrace of progressivism. The photograph celebrates those facts, but casually; what it really wants you to focus on is how remarkable its subjects are, how secure in themselves and each other. The picture assumes the success of the venture.

The contrast between the two pictures makes for, in some ways, a heartening reminder that even if an audience understands the financial motives behind apparently progressive acts, they can still tell if those acts are meant genuinely. The release of the Netflix photo was accompanied by a video of the shoot, narrated by Caleb McLaughlin of “Stranger Things.” “This is not a moment,” McLaughlin says toward the video’s end, as the camera zooms out on the assembled talent, perfectly posed and strikingly at ease. “This is a movement.” That movement may be new. But its market savvy is old.