Mandrakes, Dragons, Jews — And Other Monsters Of Medieval Times 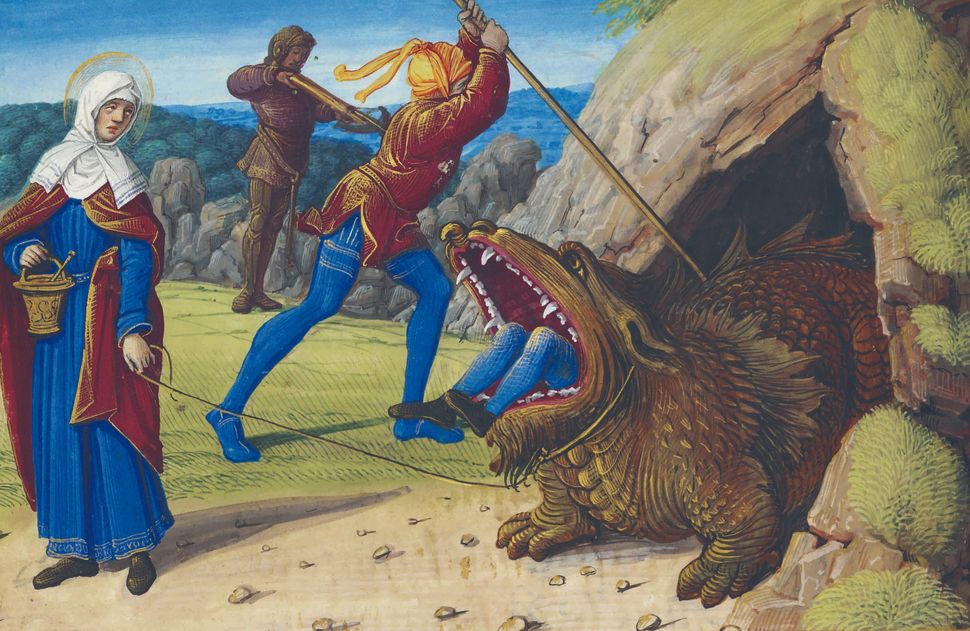 “Taming the Tarasque,” from Hours of Henry VIII, Image by Morgan Library and Museum

The mandrake is a small, perennial plant that grows in warm Mediterranean climates. Its flowers are a pretty shade of purple, but its roots can be deadly. Pluck a mandrake from the soil and you’ll find a tiny man hanging down underneath the leaves, screaming loudly enough to kill anyone nearby. The only safe way to harvest the plant is to get a dog to pluck it for you.

Or maybe it’s safe to harvest it on a Monday, but only after the vernal equinox. When you get your hands on a mandrake, at any rate, you can grind it up into a fine powder and inhale it, at which time you may start having visions. Or, if you’re trying to have a child, you can eat the mandrake, although just smelling the flowers might be sufficient. A 14th-century Italian medical textbook shows the little man that sleeps beneath the mandrake plant, leaves growing out of his head like a great, green headdress.

That image, and dozens of others depicting strange un- or semi-real creatures, is currently hanging in Manhattan’s Morgan Library and Museum as part of an intelligent new exhibit, “Medieval Monsters: Terrors, Aliens, Wonders.” Walking through the exhibit, I kept thinking of a famous quote from the English historian E. P. Thompson: his claim that he wanted to use scholarship to rescue the people of the past (especially anonymous, working-class people) from “the enormous condescension of posterity.” It can be very difficult to study old, debunked beliefs without a hint of a sneer. Because the beliefs have already been proved wrong, it’s tempting to conclude that the impulse that inspired them was similarly “wrong” or low — thus, medieval people believed in dragons out of stupidity and fear, nothing more. 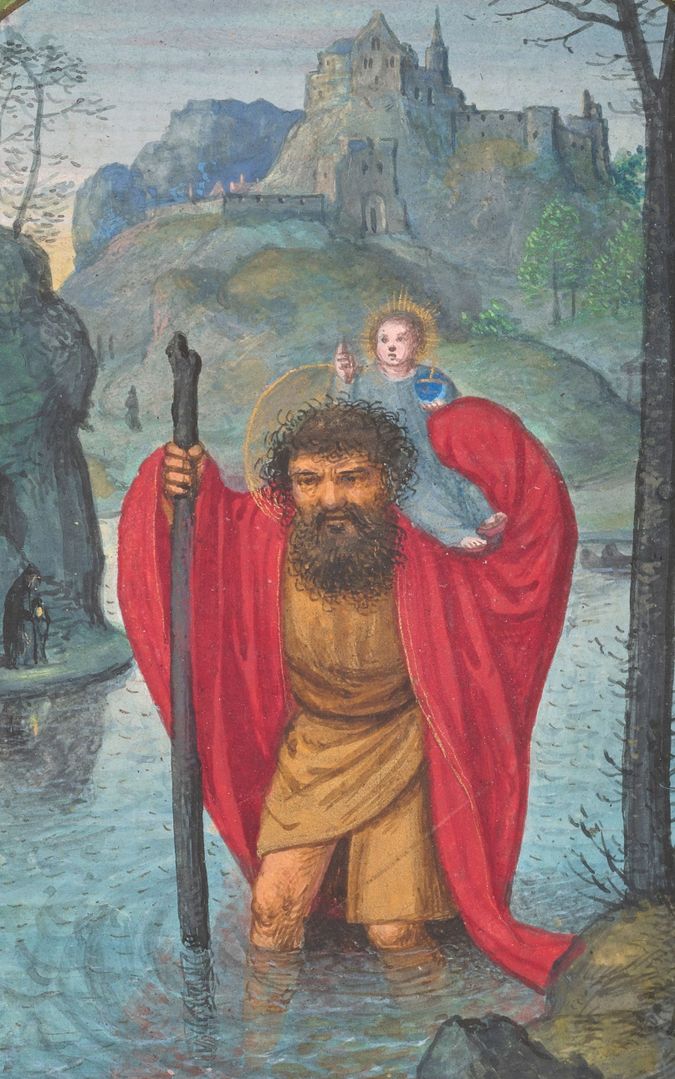 The exhibit’s great achievement is to avoid this trap by showing how subtle and multifaceted the medieval understanding of monsters could be. Consider the word itself: The English “monster” (like the Italian mostro and the French monstre) derives from the Latin monstrare (to show) and monere (to warn). But to show what, and to warn whom? Medieval monsters weren’t necessarily embodiments of evil; their presence could be an omen, ill or otherwise, and their wondrous forms could inspire as well as scare. The range of feelings with which we respond to monsters (awe, hatred, terror and fascination) has changed very little since medieval times, even if we’re more likely to direct those feelings at Conor McGregor than at a fire-breathing dragon.

You can sense, nevertheless, the condescension Thompson described in a term like “Dark Ages,” still used interchangeably with “medieval” to describe the period bookended by the fall of the Roman Empire and the dawn of the Age of Exploration. “Dark” suggests wretched ignorance waiting to be cured by knowledge — as it was, in the arc of pop history, by the Renaissance. Historians know this is nonsense: The medieval era saw the birth of the university system and an abundance of scholarship integrating the Christian and the Greco-Roman intellectual traditions. But this was also a time of turmoil during which Christendom was dealt one humiliating blow after another. Beginning in the late 11th century, Christian Crusaders commenced a long, miserable war against Sunni Islam, supposedly to reclaim the Holy Land of Jerusalem; by the end of the 13th century, the last Crusader cities in the Middle East had surrendered. Less than 100 years later, the Black Death wiped out more than a third of Europe’s population.

Faced with this slew of external dangers, some cultural historians have suggested, the medieval Christian’s relationship with religion grew more inte- riorized — as if the purification of the soul could ward off defeat and disease. We can see this in the growing popularity of the Book of Hours, an anthology of prayers and Gospel excerpts designed for the lay-Christian; it is also one of the most popular texts of pre-Gutenberg Europe. The rise of the merchant class in late medieval times created a healthy market for devotional literature, which could be read and reread at their owners’ leisure, allowing for a more personal, idiosyncratic relationship with the faith. One of the most remarkable things about the Book of Hours displayed at the Morgan — and something that’s all too easily lost in digital reproduction — is its smallness. A 15th-century Belgian edition includes an illumination (the preferred term for the pictures and other aesthetic components of medieval manuscripts) of St. George slaying a dragon. This meek, doglike monster isn’t even a patch on Smaug; then again, the entire book is no bigger than my hand. The illumination’s purpose isn’t to spook the reader but to encourage the calm, private contemplation of evil and its mightier opponent, good. 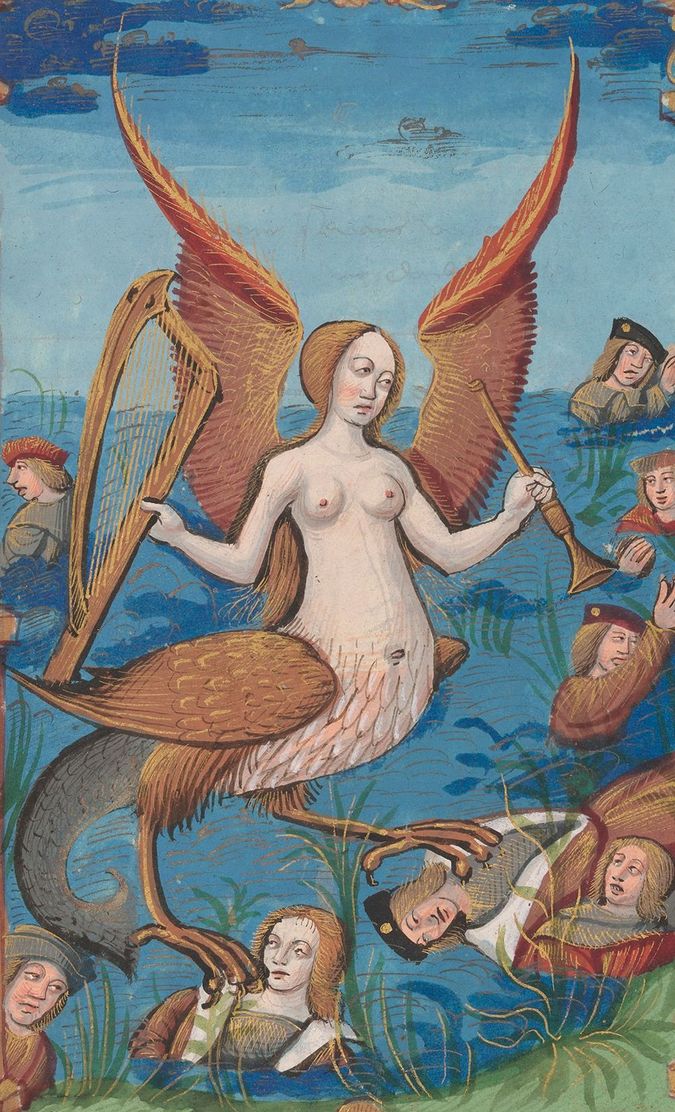 Other medieval monsters engaged Christians in still more explicit tests of faith. Unicorns, it was widely believed, could be tamed by only chaste, pious women. In some of the late 15th-century Flemish tapestries known as “The Lady and the Unicorn” (regrettably not on display at the Morgan, which specializes in works on paper), the lady seems almost bored in her tranquility, as if this marvelous beast has been keeping her company for her entire life. Other details of the tapestries suggest magic realism when viewed today, with creatures like monkeys, leopards and cheetahs made to seem as new and wondrous as the unicorn. An enormous narwhal tusk hanging in the Morgan exhibit offers visitors something of the same mood, the familiar briefly reimagined as alien.

If these medieval monsters suggest a series of joyous elaborations on reality, others required a procrustean stretching and snipping of information that was only half-true to begin with. In ancient Greek versions of the legend, the sphinx kills herself after Oedipus solves her riddle; a late medieval miniature by Antonio Pisano muddles the point by reimagining Oedipus as a gallant Saint George who offs the monster with a big, phallic sword. A 15th-century Book of Hours contains an illumination of the martyrdom of Saint Quentin at the hands of a bearded, scimitar-wielding Muslim that says very little about the martyrdom (Quentin died in the third century, about 400 years before there were any Muslims available to kill him) and a great deal about the panic the Ottoman Empire inspired in Europe in the 1400s.

Then there’s a cavalcade of medieval monster artwork that lays bare the era’s anti-Semitism, the bullying stupidity that blamed the Jews for killing children and poisoning the wells and conspiring with the Saracens to keep the Holy Lands unholy. It’s no exaggeration to say that, for hundreds of years, the image of the barbaric, only semi-human Jew was used to explain away medieval European culture’s contradictions, rationalizing the divide between the mighty fortress of Christianity and enfeebled, disease-ridden Christendom. Medieval Jews were more than scapegoats; they provided good, pious Europeans with a way of indulging in sadism without being accused of hypocrisy. A Christian, enjoying a play based on the popular tale of the Jew of Bourges, was invited to gasp when the titular character burned his child alive, and then, without missing a beat, to cackle at the sight of this villain being thrown into a furnace as punishment. In a 14th-century French illumination, the Jew of Bourges thrusts his child into the flames with a stick; his body spills gracelessly out of the frame, signifying his utter out-of-place-ness in the story, in Christianity, in Europe. Bright-gold leaf foreshadows his fiery comeuppance, first on earth and then, for eternity, in hell.

Few works of art better exemplify Walter Benjamin’s famous thesis, “There is no document of civilization which is not at the same time a document of barbarism.” The image’s anti-Semitism is like the photographic negative of its cloying sentimentality (the child is rescued from death and converts to Christianity). The same could be said for “The Prioress’s Tale” from “The Canterbury Tales,” loosely inspired by 13th-century reports of an English boy allegedly murdered by Jews. In Chaucer’s poem, a monstrous Jew kills a young Christian child and later hangs for the crime. The child’s death and momentary resurrection occasion some of Chaucer’s most famous lines, which the poet Matthew Arnold would later call his very best. Equally critical to the tale is the Jew’s execution — in a just, Christian universe, enemies of the faith must not go unpunished, even if their wickedness can’t be undone. A 13th-century Psalter illumination, in which a hulking demon marches a Jew down to hell, twists this logic still further: The demon sports a long, hooked nose, a surefire Semitic signifier in medieval manuscripts. It wasn’t enough for the artist to render the Jews demonic; the actual demons are Jewish.

But it’s worth singling out two of the damned souls standing near the Jew. One wears a crown; the other is clearly a monk, his hands locked in prayers that can no longer save him. This is Christianity at its most anarchic: If a king and a monk could end up in hell, then who could be sure of getting into heaven, and who was really in charge on earth? Portraying the Jews as monsters was a convenient way of deflecting attention from what Paul had recognized as the inherent sinfulness of all humankind, Semitic or otherwise. Here in the illumination, for once, the medieval Christian’s hatred of the heretical Other stands shoulder to shoulder with self-hatred, the one spurring on the other in an endless, mindless cycle.

Small wonder, then, that some of the most ambiguous images in the Morgan Library’s exhibit depict exorcisms, those rituals in which the evil is internal and external at the same time. In a miniature accompanying the 13th-century German writer Hugo von Trimberg’s epic poem “Der Renner,” a monk draws a black, mosquitolike demon out of a convulsing man’s mouth. Meanwhile, another monk forces his hand into the fire to distract himself from his carnal desires. These desires may be the product of a second demon’s mischief, or they may be the product of man’s innate, incurable monstrousness — disobedient flesh “rising up against the soul’s desire,” as Saint Augustine wrote, “in disorderly and ugly movements.”

In this way, the miniature becomes a guide to two seemingly different ways of thinking about monstrosity: first, as a state of mind, an awareness of one’s flaws, a proclivity for doing evil, intentionally or not; second, as a weird, supernatural beast, with claws or fangs or feathers. As long as we have one, we’ll probably go on believing in the other. In 1999, the Catholic Church revised its official guidelines for performing exorcisms. Though it tried to limit the number of people demanding an exorcist (“… the person who claims to be possessed must be evaluated by doctors to rule out a mental or physical illness”), it didn’t disavow the practice altogether. And 16 years after that, an orange-haired ogre announced his presidential run by claiming that hordes of monsters were invading his country: “They’re bringing drugs. They’re bringing crime. They’re rapists.…”

Jackson Arn is a New York-based freelance critic and journalist.

Mandrakes, Dragons, Jews — And Other Monsters Of Medieval Times