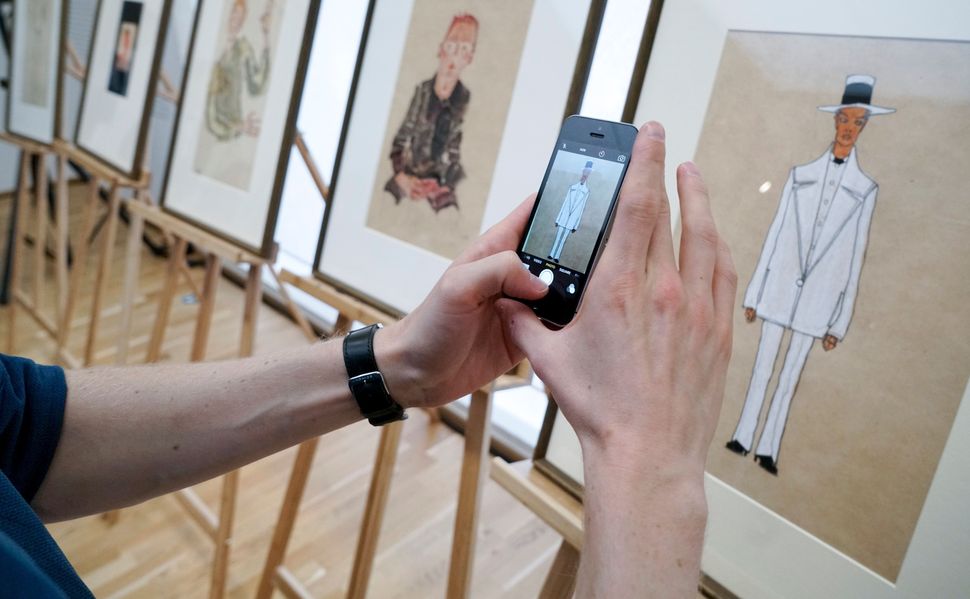 A man photographs one of five drawings by Austrian painter Egon Schiele during an April, 2016 press conference at Vienna’s famous Leopold Museum, which agreed to return two artworks to the heiress of Viennese art collector Karl Maylaender who was deported in 1941. Image by JOE KLAMAR/Getty Images

When the Viennese cabaret artist and art collector Fritz Grünbaum was deported to the Dachau concentration camp in 1938 — he would die there in 1941 — his art collection numbered more than 400 works, many by the Austrian Expressionist Egon Schiele. Much of his collection was confiscated by the Nazis after his deportation, after which its history becomes murky. Grünbaum’s heirs have been trying to recover his lost collection for decades.

In April, Judge Charles Ramos of the New York State Supreme Court ordered that two Schiele drawings in the possession of London-based gallery owner Richard Nagy, “Woman in a Black Pinafore” and “Woman Hiding her Face,” be returned to Grünbaum’s descendants. Nagy is appealing that ruling, and now, as The New York Times reports the two drawings it concerns are among 63 Schieles claimed by the family that have been removed from a database that tracks Nazi-looted art. The two drawings ruled to belong to Grünbaum’s heirs are among those scrubbed from the database, a decision the heirs are challenging.

The database began operations in 2000, after which it was run by a number of organizations; it’s currently under the control of the German Lost Art Foundation, an organization established by the German government in 2015 to research and locate missing artwork. The database is designed to track and flag artwork believed to be stolen by the Nazis that is put on the open market. A listing on the database can affect a work’s value and may pressure sellers to return the work to the original families.

“The Foundation is sometimes asked to take search requests (lost reports) off the database,” Freya Paschen, a spokeswoman for the foundation, wrote in an email to the Forward. “In the case of the collection of Fritz Gruenbaum [sic], this rare case affected 63 works, whereas 163 other objects are still on record. It is important to note, that the fact that Fritz Gruenbaum [sic] was persecuted by the Nazis is not contested. That is why a great number of lost works of his former collection are still published.”

While the foundation assesses the validity of requests to list artwork in the database, it itself does no research into the works’ provenance.

The removal of the 63 Schieles was prompted by a push from art dealers, including Nagy, who maintain that the works in question were never stolen. The Schieles, the dealers contend, were transferred to the ownership of Grünbaum’s sister-in-law, Mathilde Lukacs-Herzl, who sold them to the Swiss art dealer Eberheld Kornfeld in 1956.

In 1998 Dr. Rudolf Leopold, an art collector who purchased two Schieles from the Grünbaum collection claimed that he knew of at least 16 other works from the same collection that had been sold. In reporting this development The Times found that all 16 works were purchased from Kornfeld’s gallery in 1956. When reached for comment in 1998, Kornfeld first claimed he didn’t “remember the details” of the sale, but later named Lukacs-Herzl as the seller of the works, The Times reports.

In challenging the account and the decision to remove the paintings listed, Grünbaum’s heirs cite discrepancies in Kornfeld’s documents, including multiple misspellings of their relative’s name in what were supposed to be her own signatures. The heirs also argue that the fact that Lukacs-Herzl was only identified by Kornfeld over 40 years after the reported initial sale and nearly two decades after her death indicates the dealer’s story was fabricated.

Among the 63 paintings struck from the database is “Dead City III,” a painting that belonged to Leopold that was seized from an exhibition at the MoMA by New York District Attorney Robert Morgenthau in 1998 on behalf of Grünbaum’s heirs. The heirs’ attorney, Raymond Dowd, called the move by Morgenthau “the most important art seizure in history,” and it paved the way for the Washington Principles, guidelines for the restitution of Nazi-confiscated art established at an international conference in December of the same year.

“It’s a disgrace that Germany would erase the work of Robert Morgenthau, which is what led to the Washington Conference in the first place,” Dowd told the Forward.

“The unlisted status of these paintings might change, if new historical information is brought forward that would challenge the current status,” Paschen told the Forward.