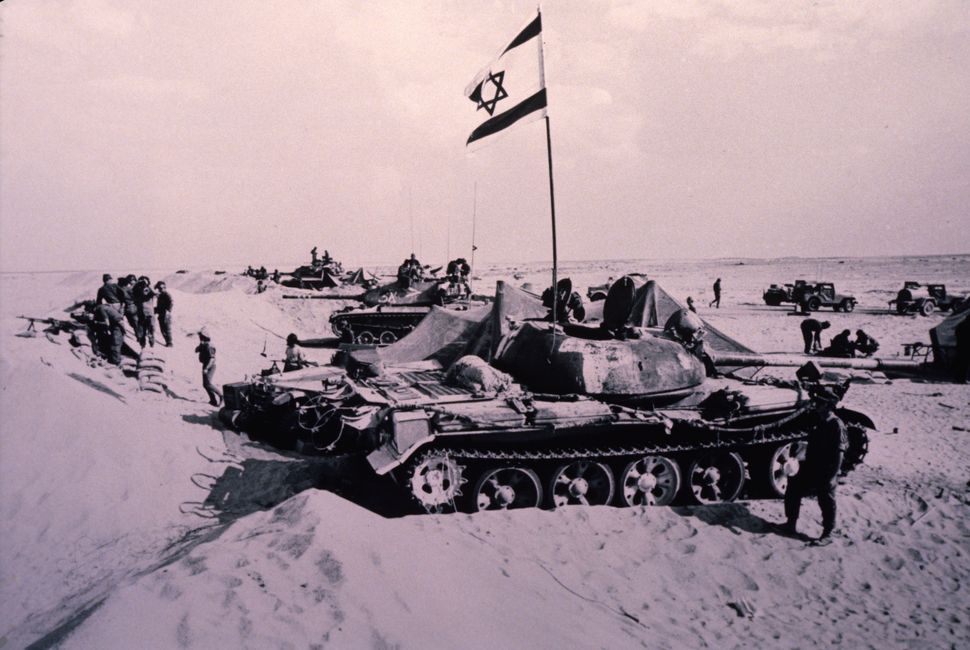 Tank In The Desert: A scene from the 1973 Yom Kippur War as photographed by Nathan Fendrich. Image by Israel National Library

A few faces in Nathan Fendrich’s photos are familiar: then-general Ariel Sharon beams while surrounded by soldiers; Chaim Topol, the Israeli actor played Tevye in “Fiddler on the Roof.” But most of the subjects remain a mystery 45 years after he photographed them in the heat of the 1973 Yom Kippur War. 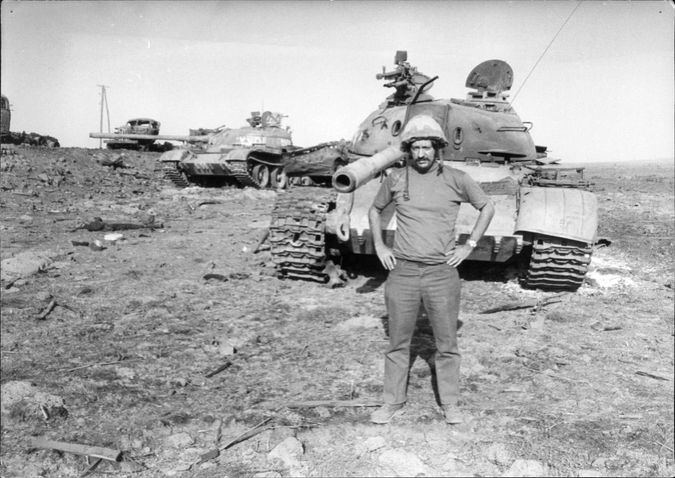 Photographer As Subject: Nathan Fendrich during a relatively calm moment during the 1973 Yom Kippur war. Image by Israel National Library

Fendrich, 84, donated his collection of photographs to Israel’s National Library, which is now on the hunt to identify the unknown soldiers in the photos.

Egyptian and Syrian forces launched a surprise attack on Israel on October 6, 1973. Israel was caught off guard on the holiest day in the Jewish calendar after what has generally been attributed to a breakdown in military intelligence. In the course of the 20-day conflict, over 2,400 Israelis were killed and thousands more wounded. Syria and Egypt suffered at least three times as many casualties.

Fendrich, a 39-year-old Oregonian, had arrived in the country a week before the fighting broke out. He took hundreds of pictures, many of them featuring Israeli soldiers with whom he embedded. They offer a rare glimpse at the human side of the conflict — joy and elation, anguish and pain. 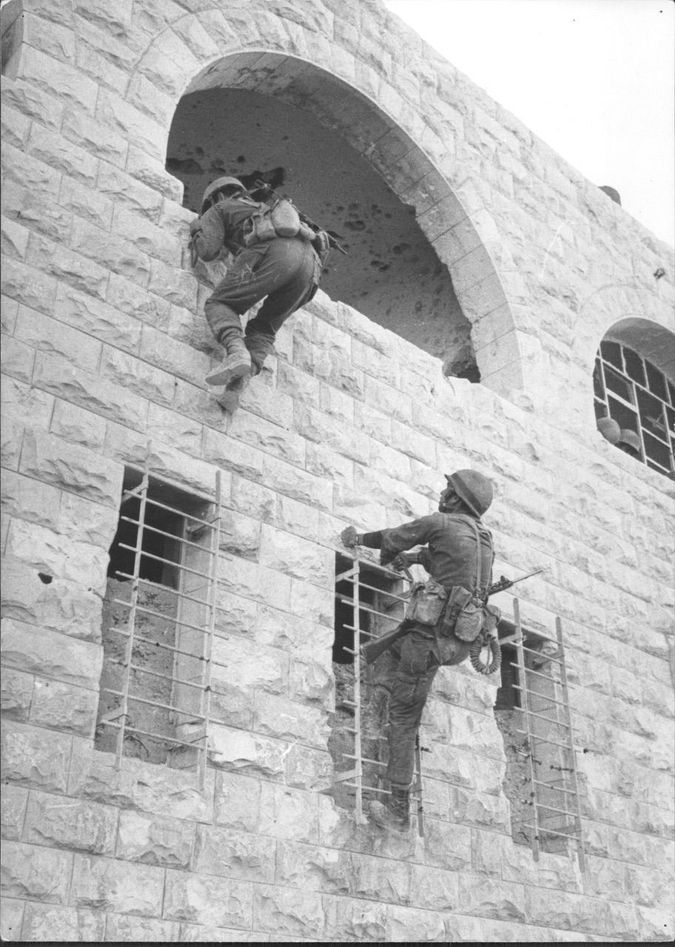 From The Nathan Fendrich Collection: Israeli soldiers climb to enter a building in Ismailia, Egypt. Image by Israel National Library

“Honestly, I never had any idea there was any interest in these pictures,” Fendrich told The Forward in a telephone interview. “Unfortunately all the pictures that had been taken, upon my death, were headed to a garbage can.”

Instead, Fendrich’s photos have been digitized and donated to Israel’s National Library, where they have become part of the more than one million photos in its collection.

What makes Fendrich’s “really exceptional” collection unique is that it provides a “more intimate angle” of the soldiers fighting in the war, said Dr. Aviad Stollman, head of collections at the National Library. Photographs from the ’73 war are comparatively rare, and Fendrich not only took high-quality and resolution images, but was at the right place at the right time. 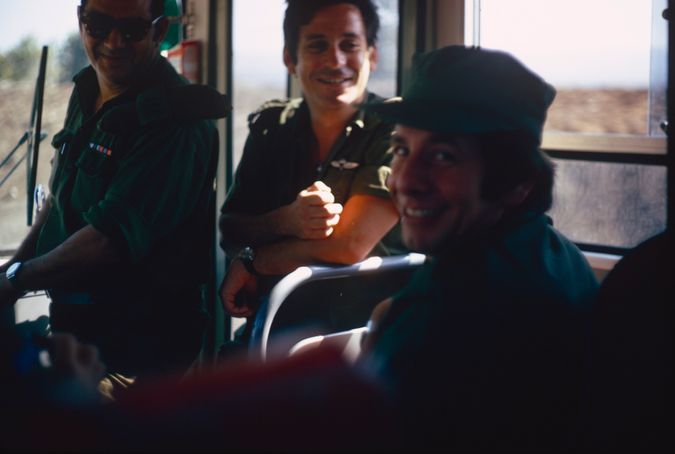 Far From Anatevka: Chaim Topol, as photographed by Nathan Fendrich in 1973. Image by Israel National Library

Fendrich said he had been going through a rough patch in his life during the lead-up to the war, and came to volunteer at an archaeological dig at Tel Qasile, a Bronze Age site on the Yarkon River in northern Tel Aviv. Before leaving for his first visit to Israel, he got press credentials from a friend who was working at KEVI, a local Eugene, Oregon, TV station.

“About a week later the war broke out,” he recalled. He tried to enlist in the Israeli military, but was rejected. He turned up at Beit Sokolov, headquarters of the Israeli Journalists Association, and — although he had no prior professional photography or journalistic experience — was hired by the Starphot photo agency. His IDF press liaison officer for a few days was none other than Chaim Topol.

Despite the fact that he didn’t speak Hebrew, Fendrich managed to finagle his way into embedding himself with Israel soldiers on both fronts of the war, ping-ponging back and forth between the Sinai Peninsula and the Golan Heights. By his accounts, he was slightly wounded as a unit he accompanied stormed a building in Ismailiya, Egypt. He captured a kibbutz that had been pounded by Katyusha rockets from Syria, Druze villagers in the Golan Heights, an Israeli F-4 fighter jet screaming over battle tanks in the Sinai.

For Fendrich, one photo sticks out from the rest: a wounded Syrian soldier being fed by an Israeli soldier in the Golan Heights. A Syrian military column had been destroyed days before, and as Fendrich walked around the road he heard crying emanating from a burned out tank. 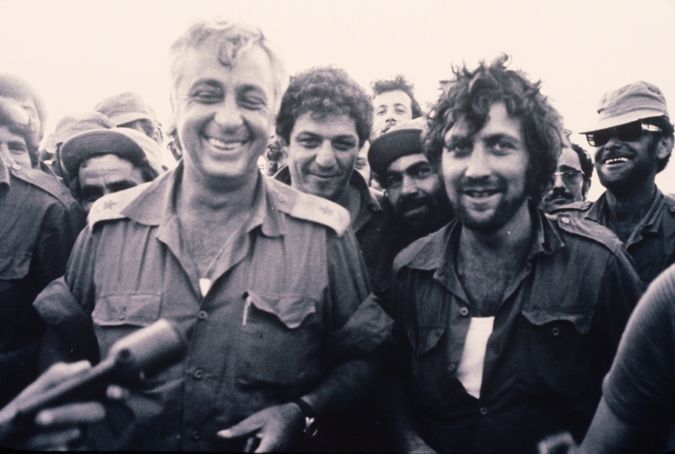 After The Battle’s Lost And Won: Nathan Fendrich with Ariel Sharon. Image by Israel National Library

“I walked over and peered under this tank where I heard the crying coming from. It was a Syrian truck driver hidden under the tank, and he’d been there for three days, burned, no food, no water, cold nights, hot days,” Fendrich recalled. “He’d been laying under that tank dying, and he was so scared of the Israeli soldiers that he’d been told these horror stories what they’d do to him if they’d got him, so he was afraid to surrender.”

The Israeli soldiers Fendrich called over gave him food and water and dispatched him to a hospital. “I’d love to meet that guy again. He was just a kid.” 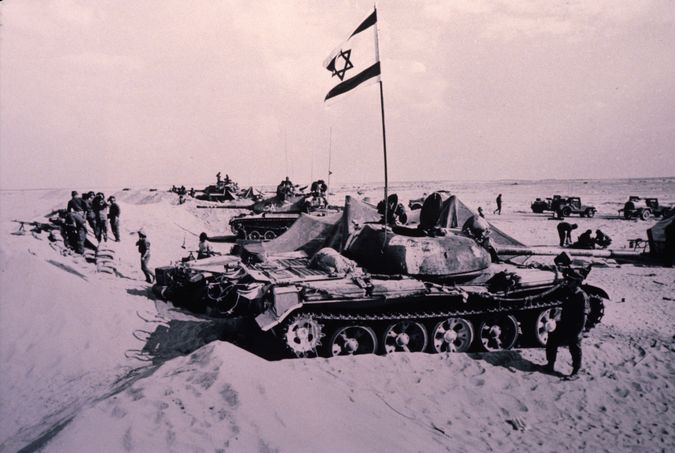 Tank In The Desert: A scene from the 1973 Yom Kippur War as photographed by Nathan Fendrich. Image by Israel National Library

Some of Fendrich’s most captivating images are those of the men he befriended on the front.

“Here, for the first time in my life, I felt a camaraderie, with these soldiers,” he said.

At least 40 of Fendrich’s photos appeared in European magazines covering the war. Hundreds more ended up in boxes after he returned to Eugene, where he wound up working for his family’s furniture company. 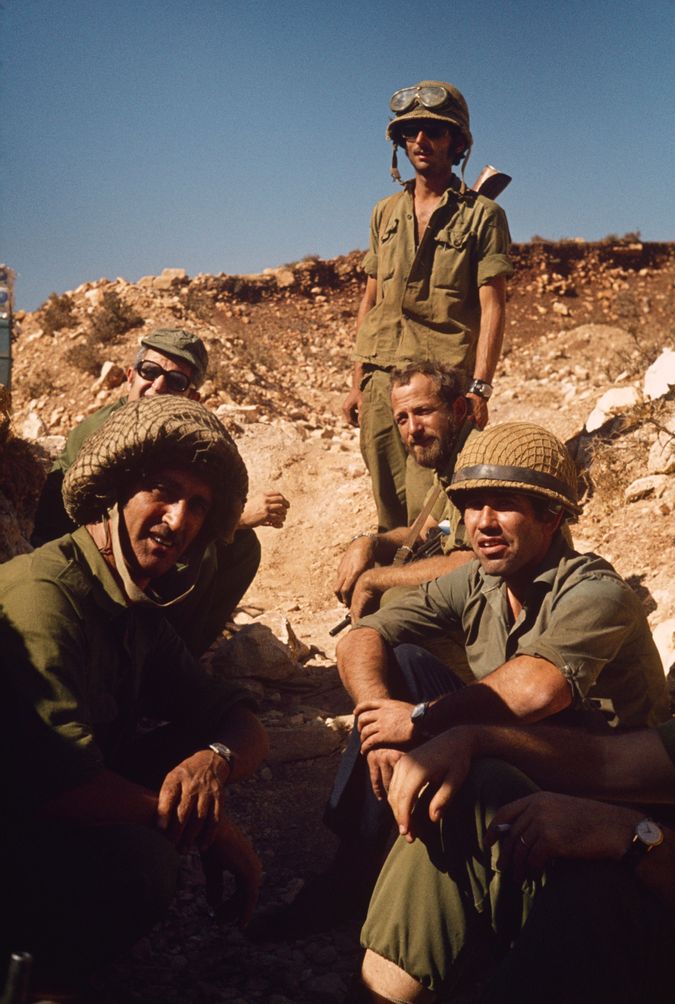 A Moment of Calm: Soldiers take a break during the 1973 war. Image by National Library of Israel

For Stollman and the National Library, Fendrich’s pictures offer a unique first-person perspective of the war and is an important resource for researchers. The National Library has appealed to the public for help in identifying the people in the photographs.

“Every snippet of information is welcomed!” the library says on its website. Stollman said one individual in Fendrich’s photos has already been identified thanks to a Facebook post. 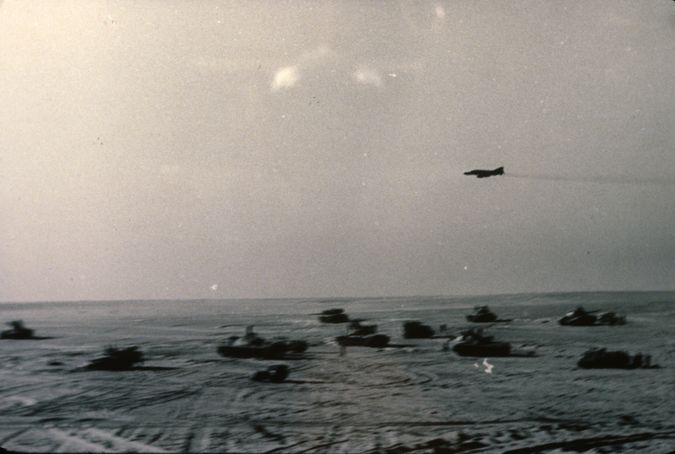 Aerial Shot: Hundreds of Nathan Fendrich’s photos more ended up in boxes that weren’t opened for more than four decades. Image by National Library of Israel

Looking back, Fendrich called his “adventure” documenting the war in ‘73 “my finest hour,” and “my personal Camelot.”

“It was something I wanted to do and had to do, and I’m proud of it,” he said. 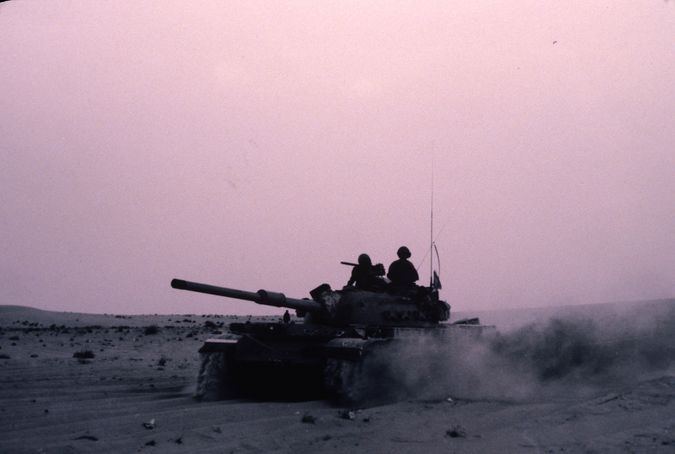 Ask The Dust: A tank rolls through the desert during the 1973 Yom Kippur War. Image by National Library of Israel