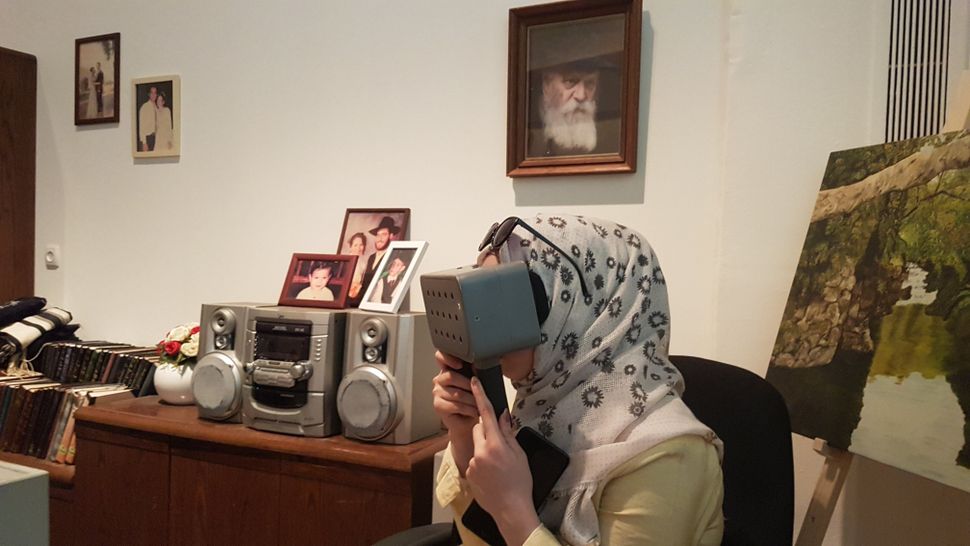 Raji Sabateen, 56, lives in the village of Husan in the Palestinian West Bank, a place where few Israelis dare to visit. But over the past five months, thousands of Israelis have spent time inside Sabateen’s home through the power of virtual reality.

Sabateen’s home is featured at Jerusalem’s Israel Museum as part of “Eye to I,” an exhibition on encountering the other in the digital age. On the second floor of the exhibition, visitors are invited into a small room. On one side of the room, there is a plush chair, a metal clock, and an ornately carved wood cabinet topped with three hookahs and a guitar — a rough replica of Sabateen’s living room.

By donning a pair of virtual reality goggles, visitors can immerse themselves in Sabateen’s home — men smoke a hookah, children play on a porch swing, and Sabateen and other family members address the camera to discuss their lives and their view on Israeli-Palestinian relations.

On the other side of the room, there is an Israeli family, the Orthodox Jewish Avidans of Modiin, a suburb between Jerusalem and Tel Aviv. The model of the Avidan living room includes a bookcase full of Jewish texts and a portrait of Rabbi Menachem Mendel Schneerson. The virtual reality goggles reveal the Avidans at home, eating, lounging, and also answering discussing their perspectives of the other.

While the Avidan home might be familiar to Israeli museum-goers, the Sabateen home is probably new territory. For many Israeli visitors, a trip to this exhibition is their first time “inside” a Palestinian home, said curator Shir Meller-Yamaguchi. Experiencing the other through virtual reality could “change the alienation” in real life, she said.

A recent visit to the exhibit seemed to point to this possibility. A young Orthodox couple walked into the split living room and put on the virtual reality goggles. Reut and Tzur Elias, both 25, said that they had never before seen the inside of a Palestinian home. “It’s pretty special to see it,” said Tzur. “It’s pretty nice to see how other people live and act inside their house.” Reut said that watching the Sabateens was a humanizing experience. “They are not only enemies,” she said of Palestinians. “First they are people.” 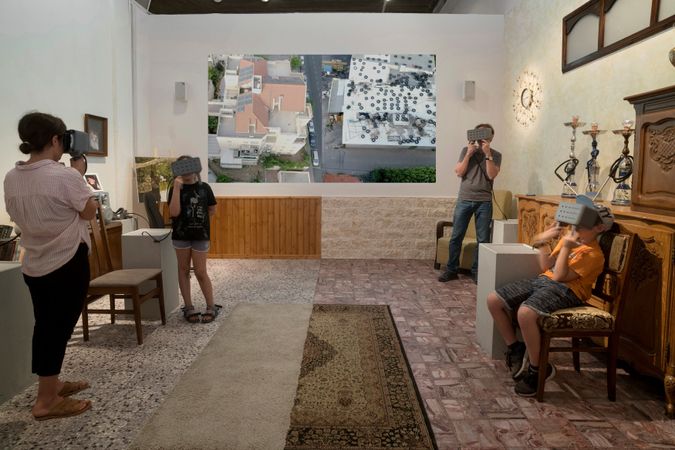 Change of Perspective: At the Israel Museum’s “Eye and I” exhibit, viewers are invited to visualize the “other.” Image by Courtesy of Israel Musuem

The virtual reality exhibit, called “Visitors,” was created by Daniel Landau, an Israeli media artist and researcher at the Interdisciplinary Center Herzliya. Landau grew up in French Hill, an Israeli neighborhood just over the Green Line adjacent to the Palestinian neighborhood Isawiya. When Landau was invited to contribute to the Israel Museum exhibition, he originally thought to situate his project in these two neighborhoods, geographically close but a world apart.

Landau reached out to a Palestinian contact in Isawiya, but he declined to participate, said Landau, because he was afraid of putting himself at risk given the political climate against Palestinian “normalization” with Israeli institutions. Landau’s other attempts to locate Palestinians in Isawiya also failed.

Landau eventually found Sabateen, who works in Israel as a builder. Sabateen has relationships with Israeli Jews, and even hosts them in his home in Husan, a village cut off from the West Bank by Israel’s separation barrier. He maintains these ties even though he says Israeli settlers have harmed his property by destroying dozens of his olive trees. “Not all Jewish people are the same,” he said in an interview. “There are good people and there are bad.”

Given that Sabateen already invites Israelis into his home, it was not a huge a stretch to open the door to even more of them through virtual reality. He agreed to let Landau bring over his 360 degree camera and capture his family life. “I want the Jewish people and our people to see that there are very good relationships between us,” Sabateen said

Landau found David Avidan, who could not be reached by deadline, through a friend of a friend. Like roughly half of Israeli Jews, Avidan and his family are Mizrachim, of Middle Eastern heritage. For Landau, who is Ashkenazi, this was a deliberate choice. The use of a Mizrachi family was meant to underscore one of the “tragic” ironies of the conflict, he said: the fact that many Israelis and Palestinians share a cultural heritage.

It’s a point that is hinted at multiple times in the virtual reality footage, such as when Sabateen comments on the fact

‘They are not only enemies. First they are people.’

that Ashkenazim hardly offer him a cup of tea or coffee when he is working in their homes. Mizrachim, on the other hand, will give him their food. Their “customs and traditions” are closer to the Palestinians’, he says.

The virtual reality footage also deals with the mistrust on both sides. At one point, Avidan’s father-in-law, Lev Eliyahu, who was born in Tunis, laments the loss of a close relationship with a Palestinian who used to work with him. When pressed by Landau, he admits that he wouldn’t be willing to let this man live next door to him. The reason, he concedes, is fear.

Meller-Yamaguchi said she hopes the exhibit will prompt visitors to reach beyond such fears. “When you go out of this exhibition, if you want to have contact with a family — an Arab family or a Jewish family — there are ways to reach out and organizations that create those encounters,” she said.

On the appointed day, Landau said, the Avidans showed up right when the Sabateens had to leave to return to the West Bank. Just outside the door to the museum, David Avidan and Raji Sabateen met one another for the first time. Landau recorded the interaction. “They exchanged a few warm words,” he said. “They invited each other to their respective homes and expressed the will to meet again.”

Naomi Zeveloff is the Forward’s former Middle East correspondent and a freelance reporter based in Jaffa.