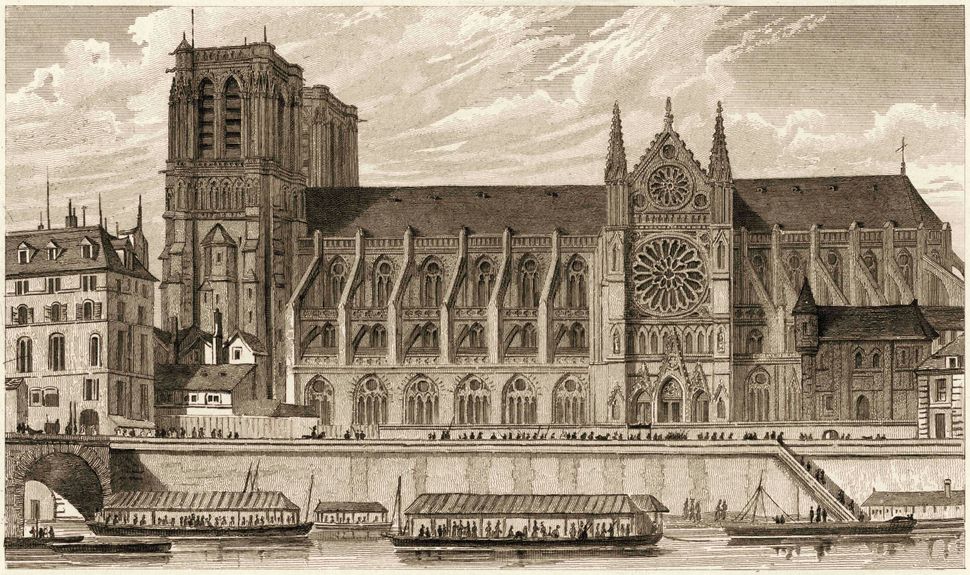 As flames devastated Notre-Dame de Paris cathedral on April 15, more than just a worldwide center of Catholic worship and an architectural masterpiece was threatened. Jewish history is also reflected in the cathedral, for better and for worse.

When its massive construction began almost one thousand years ago, Notre-Dame de Paris reflected theological messages that stayed relevant for the Catholic Church for centuries afterwards. One such is demonstrated by an allegorical sculpture from the 1200s of a woman representing Synagogue, next to one representing the Church. Modern Jewish viewers have expressed concern that a snake is wrapped around the Synagogue figure’s head, impeding her vision. Still, observers must admit that the statue of Synagogue is uncommonly elegant, a slim, graceful figure with aristocratically elongated fingers and strongly carved features, like a more human and shapely version of the Statue of Liberty. So this was no mere lowly depiction of anti-Semitism, even if the obvious message is that Synagogue, representing Jewish people, cannot see clearly because she has not accepted the truth of Christian salvation. 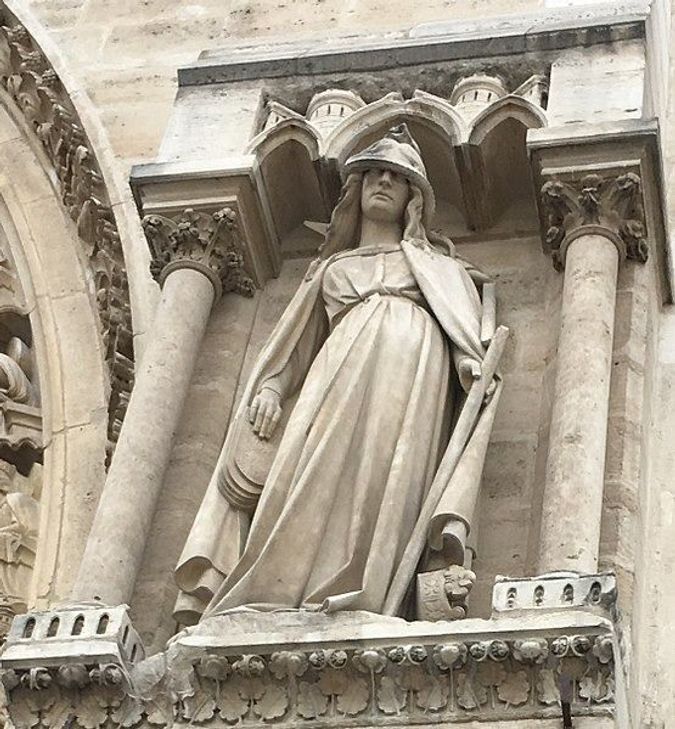 Notre Dame Detail: An allegorical sculpture from the 1200s shows a woman representing Synagogue, next to one representing the Church. Image by Wikimedia Commons

In 1938 Leo Spitzer, a critic of literature and the arts, reviewed a book on these and parallel issues by Hiram Pflaum. Pflaum was a German Jewish scholar on Judah Abravanel who made Aliyah in the 1920s and taught at the Hebrew University of Jerusalem on many subjects, including relationship between Church and Synagogue in religious disputations of the Middle Ages. Spitzer praised Pflaum, who later adopted the family name of Peri: “It is comforting to see in our day of racial hatred how a Jewish scholar can not only understand, but feel and communicate to us the pathos and the tragic awe mediaeval Christians must have felt before the triumph of the Church over the Synagogue.” The statue of Synagogue at Notre-Dame de Paris, like those in other cathedrals across Europe, Pflaum observed, were marked by “earnest dignity” and “sorrowful beauty.” Spitzer added that the “melancholy beauty of [Synagogue] is that of a really good being – the Middle Ages always represented the good as the beautiful… which knew much but did not make the right use of its knowledge.”

Nina Rowe’s “The Jew, the Cathedral and the Medieval City: Synagoga and Ecclesia in the Thirteenth Century” offers more analysis of the same argument. Jews as seen in sculptures at Notre-Dame de Paris were not the vulgar caricatures represented in popular entertainment of the time; they were lofty exemplars of part of church history, the forebears of Christianity.

Another example is on the west facade of Notre-Dame de Paris, which had twenty-eight statues of Kings of Judah, many of them currently on display at the Musée de Cluny, a museum of medieval art near the cathedral. During the French Revolution, these heads were knocked off the statues as part of iconoclastic destruction of all church property, not specifically targeting Jews. It is assumed today that uneducated revolutionary mobs pulled down the Kings of Judah because they thought they represented Kings of France. In 1977, 21 of the 28 original heads were excavated and restored. These heads at the Musée de Cluny and their 19th century replacements on the cathedral itself are refined and noble, indeed indistinguishable from those of depictions of Christian monarchs on the edifice. Further sculpted scenes, such as the Marriage of Joseph and Mary, likewise show dignified, explicitly Jewish characters.

Yet over the years these traditions were lost, as centuries of intervening anti-Semitism tended to obliterate and confuse differences in attitude. An example is the novel published in 1831 by Victor Hugo, “Notre-Dame de Paris,” traditionally translated into English as “The Hunchback of Notre-Dame.” Set in Paris in the late 1400s, the novel reflects casual anti-Semitism of that era, when one lady among a group of cathedral-goers speculates on what the mysterious bellringer Quasimodo must look like. She exclaims, “I imagine that he is a beast, an animal, the offspring of a Jew and a sow; in short, something that isn’t Christian and should be cast into the water or fire.”

The art historian Michael Camille’s “Gargoyles of Notre-Dame” cites the 19th century French architectural historian Daniel Ramée, who wrote in the 1840s that while he personally knew some “good and charitable Jews,” nevertheless French cathedrals built in the 1200s, such as Notre-Dame de Paris, are “not Christian” because of the “Phoenician-Semitic element, known under the name Jew in Europe.” For this art historian of Victor Hugo’s era, Notre-Dame de Paris was all too Jewish in its imagery.

Small wonder that the nearby Museum of the Art and History of Judaism offers a popular walking tour for children aged eight and older, “Adventures of Nathan in the Shadow of Notre-Dame,” describing how a little Jewish boy might have experienced medieval Paris in the 1200s.

Inside the cathedral are further signs of a complex, sometimes confounding relationship between Judaism and Christianity in French history. A plaque honors Aaron Lustiger (1926–2007), born in Paris of Polish Jewish origin, who converted to Catholicism at age 13, as his family was threatened by Nazi persecution. Lustiger’s mother was murdered in Auschwitz, and after the war, his father tried to have Aaron’s baptism annulled, enlisting the chief rabbi of Paris in the effort, to no avail. Instead, Aaron Lustiger, who had been renamed Jean-Marie Lustiger, entered a seminary and eventually became Archbishop of Paris, where he became known for his arch-conservative, authoritarian views. Controversially, Lustiger still considered himself Jewish despite his conversion, and would say Kaddish for his mother in synagogues. He wrote his own epitaph, which is on a plaque displayed in Notre-Dame de Paris, stating in part:

I was born Jewish.

I received the name

Of my paternal grandfather, Aaron.

By faith and by Baptism,

I have remained Jewish

As did the Apostles.

I have as my patron saints

Passers-by, pray for me.”

While Lustiger’s personal choices often irked many Jews and Catholics alike, at this time of crisis for the cathedral, it is best to recall moments of strong unity. Alas such moments rarely if ever existed during the German Occupation of the Second World War. But last year, Notre-Dame de Paris expressed its solidarity during a march to protest the murder in March 2018 of Mireille Knoll an 85-year old French Jewish woman, which was described by authorities as an anti-Semitic hate crime. Notre-Dame de Paris declared itself “in communion with the entire Jewish community” and offered its “support and fraternal friendship.” Michel Aupetit, the current Archbishop of Paris, also added a quote from the late Pope John Paul II: “Anti-Semitism is a crime against God.” These statements of reconciliation make it especially fortunate that after the fire was extinguished, it was reported that the cathedral’s statuary had endured.