The Secret Jewish History Of Popeye The Sailor Man 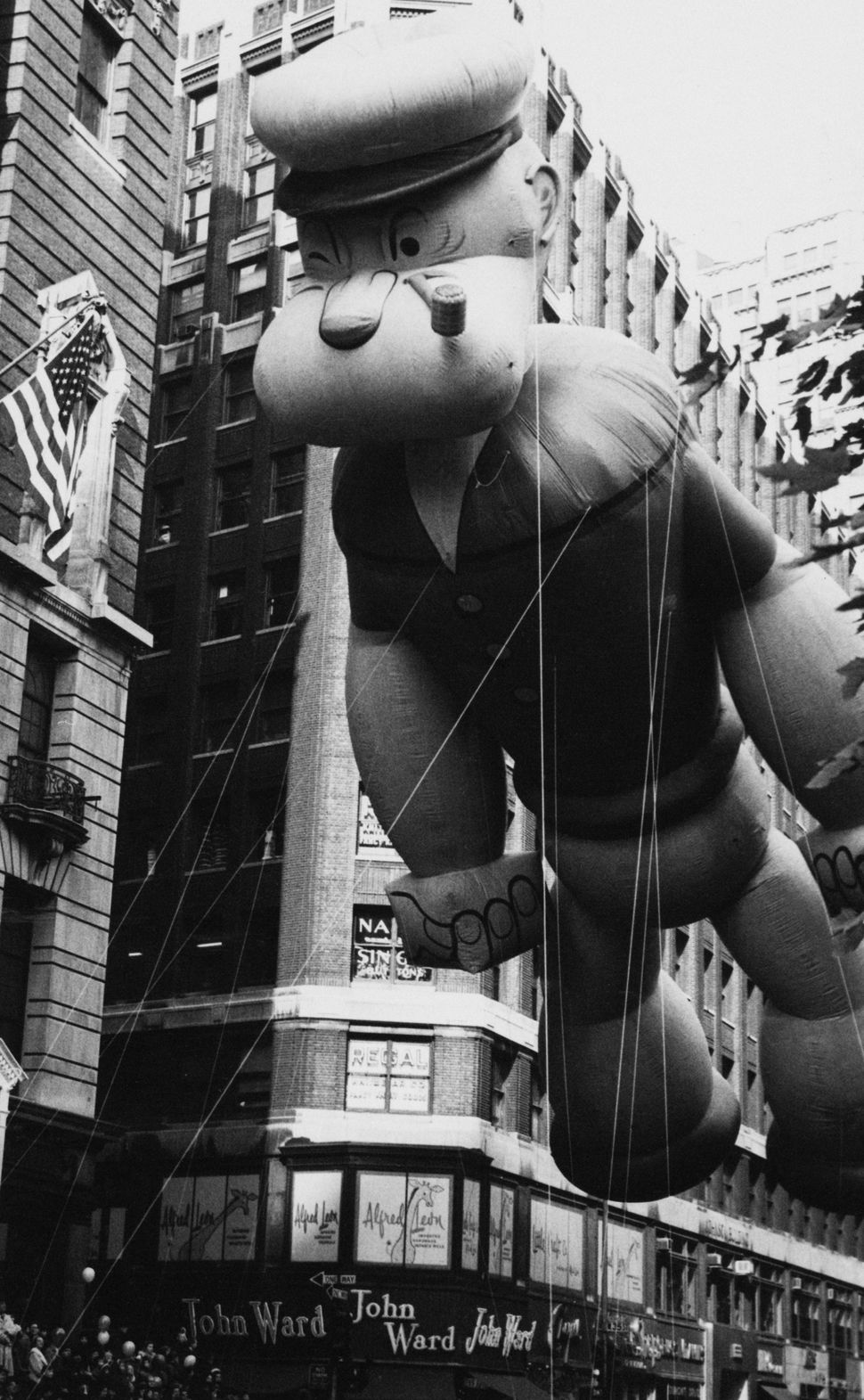 It’s the 90th anniversary of the creation of Popeye, and the Yiddishkeit of the sailor, created by American Jewish cartoonist Elzie Segar (1894–1938), is more apparent than ever. There’s even a Popeye The Sailor Man Mezuzah sold online to protect Jewish homes from evil.

Yet explicit Jewish content was scant in the Illinois-born Segar’s original Thimble Theatre comic strip which introduced Popeye, along with Olive Oyl, Wimpy, Bluto, and others. Cartoon historians have observed that unlike muscled superheroes who would follow, Popeye acquired strength by eating, surely a Jewish mother’s ideal.

The power-giving dish was, of course, spinach, coincidentally the centerpiece of traditional Sephardic Jewish cooking in Turkish Jewish spinach pie, spinach and ricotta latkes, and other delicacies. The words of Popeye’s all-devouring associate Wimpy, “I’d gladly pay you Tuesday for a hamburger today” rank him with the “King of the Schnorrers” by the novelist Israel Zangwill. Yet Wimpy’s greed sparked the ire of the Thimble Theatre’s allegedly most Jewish inhabitant, George W. Geezil, a bearded man who asks in broken English: “Did you asking me?” Last year, Hy Eisman, longtime artist for the ongoing Popeye comic strip, told “The Jewish Standard” that he omits Geezil as an unlikeable mockery of Russian Jewish emigrant speech.

These films continued Segar’s legacy, as did the theme tune “I’m Popeye The Sailor Man,” composed by Romanian Jewish songwriter Sammy Lerner with its couplet: “I’m strong to the finich/ ‘cause I eats me spinach.” Iona and Peter Opie, scholars of schoolyard games, noted that “for some reason,” in endless parodies of this tune by generations of children, Popeye “chiefly features in verses which are obscene.”

Rude or polite, interpretations of the character varied widely over the years. Originally a crude, bellicose brute, Popeye eventually grew more sympathetic as he performed feats of derring-do against even ruder foes, notably the villainous Bluto.

Yet Popeye’s entrance into American literary fiction was as a villain in an anti-Semitic context, in William Faulkner’s novel “Sanctuary” (1931) As “Faulkner and Humor” makes explicit, in “Sanctuary” a Southern murderer named Popeye is represented by a Jewish lawyer, who gets him acquitted. One character comments, “A Jew is the lowest thing on this creation. And the lowest kind of a Jew is a Jew lawyer. And the lowest kind of Jew lawyer is a Memphis Jew lawyer.”

In this ominous time, it is perhaps unsurprising that during a 1930s road trip to New England, the Ukrainian-born Jewish writer Henry Roth was attacked by a ferocious household cat named Popeye, a friend’s pet. Roth was hospitalized in Maine for four days under ether and treated for tetanus, rabies, and blood poisoning. Despite Popeye the cat’s best efforts, Roth survived to write “Call it Sleep,” an account of Lower East Side Jewish life.

Despite such assaults, by the late 1930s, other American Jews attempted to assimilate Popeye as a landsman. The surgeon Sherwin B. Nuland (1930-2014), born Shepsel Ber Nudelman in The Bronx to a Ukrainian Jewish family, recalled in a memoir that at age seven, he joined a neighbourhood Jewish group known as Popeye’s Gang, led by one Ronald “Popeye” Eisenberg.

During the approaching World War fought against Nazism, at first it was unclear what side Popeye might be aligned with. The Catalan leftist Joaquim Amat-Piniella’s novel “K.L. Reich,” evoking his imprisonment in Mauthausen concentration camp in Austria starting in 1940, mentions a brutal prison guard nicknamed Popeye, and the sufferings he inflicted upon Jewish inmates.

In Fascist Italy, the comic strip Popeye’s popularity was such that it continued to appear without crediting its Jewish creator, despite an official ban of US comics by Mussolini’s regime. In a more somber depiction, Albert Bloch’s March of the Clowns (1941), an oil on canvas now in the collection of The Jewish Museum, shows Popeye, Olive Oyl, and Wimpy watching as a clown carries a staff with a swastika, from which dangles an effigy of Hitler and a Star of David.

Popeye was no passive witness, but a combatant, after Paramount Pictures acquired the Fleischer Studios in 1942 and began churning out World War II-themed shorts showing Popeye battling Nazis and Japanese soldiers. Among these propaganda works was “You’re a Sap, Mr. Jap” (1942)

These apparent contradictions continued into the postwar era. In 1957, Israel Knox (born Ezriel Naks in Byelorussia) a Yiddishist and biographer of Isaac Mayer Wise, father of Reform Judaism in America,, published a philosophical analysis of Popeye films. Knox charged that “there is little humor in Popeye the Sailor Man” because the jokes are over-familiar, yet the character’s popularity provides a “measure of liberation in the laughter,” because good vanquishes evil, offering “satisfaction [that] is primarily moralistic.”

In more recent years, Segar’s vivacious character perplexed some observers. Jules Feiffer’s screenplay for Robert Altman’s live-action film “Popeye” (1980) baffled critics at the time with its fidelity to the original strips, but is now widely admired.

Fervent collectors of Popeye memorabilia multiplied. One, Gary Greenberg, asserted that the cartoon character’s appeal was in the “David versus Goliath spirit of rooting for the underdog to triumph over evil.” In 1994, after Greenberg purchased an item that turned out to be inauthentic, the shock to the collecting world was such that the American Jewish poet Albert Goldbarth was moved to capture the incident in verse.

Popeye began to be cited as a chochem in Jewish literary squabbles. In a 1999 interview, the novelist Merrill Joan Gerber replied to her “dear, dear friend” Cynthia Ozick who sometimes castigated her for not being Jewish enough: “But I am what I am, as Popeye says.”

Unparadoxical masculinity was represented in Philip Roth’s “The Human Stain” (2000) in which the protagonist Coleman Silk’s blue-pigmented Popeye tattoo turns out to be associated with a wild night of debauchery, hearkening back to the earlier era of associating Popeye with rude schoolyard taunts and Faulknerian misbehavior.

More reverential are Michael Chabon’s references to Popeye in “The Amazing Adventures of Kavalier &amp; Clay” (2000) in which the adolescent Sammy Klayman is described as possessing “Popeye forearms” that attract his cousin, a Jewish refugee from Fascist Europe. Chabon continued the Popeye theme in a later nonfiction essay, likening a book of Norse myths for children to “Pre-Raphaelite friezes as cartooned by Popeye’s creator, Elzie Segar, at once grandiose and goofy.”

Whether grandiose or goofy, Popeye’s legacy has remained bright in the American Jewish imagination.

The Secret Jewish History Of Popeye The Sailor Man