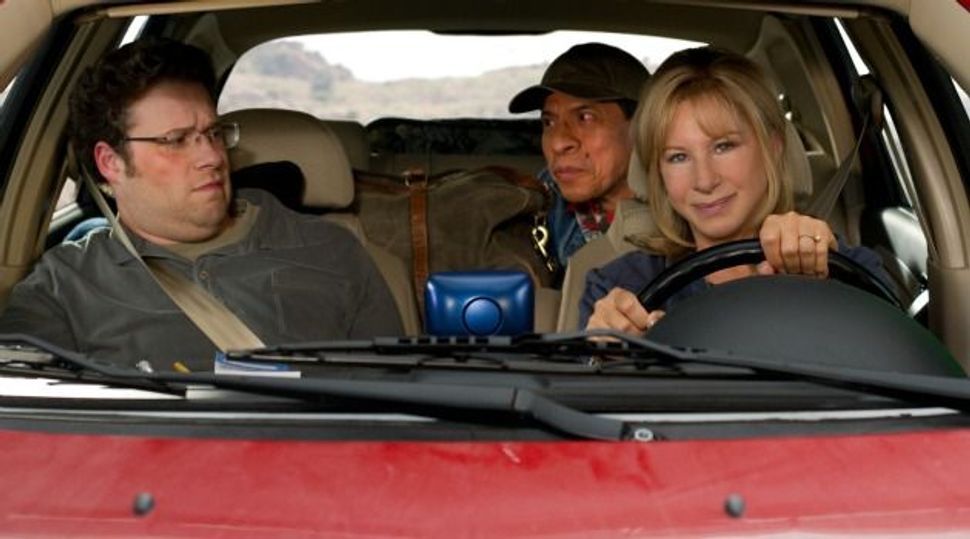 On the Road: Seth Rogen and Barbra Streisand play a stressed out mother and son in ?The Guilt Trip.? Image by Courtesy of Paramount Home Media Distribution

By Marla Brown Fogelman and Jeremy Fogelman May 11, 2013

A Jewish mother gives her son two ties on the first night of Hanukkah. The following morning, when he comes down for breakfast, he is wearing one of them. The mom says, “What’s the matter — you didn’t like the other one?”

Even while guffawing at old jokes about Jewish mothers and sons, most of us want newer material, or maybe less schmaltzy laughs on this motif, when we go to the movies. At least that was what we — a Washington, D.C. film critic and his freelance writer mother — were looking for when we decided to come up with a list of the most thought-provoking movies about Jewish mothers and sons.

Looking for a more nuanced cinematic spin on this well-worn theme, we chose movies that a) had come out in the three decades after “Portnoy’s Complaint” and b) had not been directed by Woody Allen. As Mother’s Day approaches, with its attendant themes of guilt and gifts, we present the following reviews and ratings in terms of matzo balls: from 1 (drenched in cliche) to 5 (light but filling).

Who else but a “nice Jewish boy” would invite his overbearing mother on a cross-country road trip? As meshuga as it sounds, the plot of “The Guilt Trip” is based on real life: Screenwriter Dan Fogelman (no relation) did take a road trip with his late, beloved, food-obsessed mother. But they presumably had a better time than their counterparts in this movie. Put-upon son Andrew Brewster (Seth Rogen) and his meddling mother, Joyce (Barbra Streisand), spend most of their travel time being annoyed with or offended by each other, even though their individual motives are laudable: He secretly wants to reunite her with her first love; she wants to help him with his self-esteem issues and the sale of his new cleaning product.

As tensions escalate, and Andy finally explodes at Joyce after she dishes out one too many helpings of sensible advice, we learn that this nice Jewish boy is actually kind of mean. Ultimately, we found the Jewish mother and son in “The Guilt Trip” to be one-dimensional shtick figures in need of some major screenwriting therapy.

Adam (Joseph Gordon-Levitt) gets cancer and must try to deal with his 50% chance of survival. Along the way, his best friend, Kyle (Seth Rogen, giving a much better performance than in “The Guilt Trip”), tries to keep up his spirits, and Adam visits an inexperienced therapist (Anna Kendrick). The Jewish mother aspect comes in with the fantastic performance by Anjelica Huston as Diane, Adam’s somewhat overbearing mother who’s already caring for a husband suffering from Alzheimer’s disease. Although there is a bit of humor in the way Diane wants to take care of her son, the Jewish mother stereotype acts as a way to lighten the mood and humanize the characters. The mother-son relationship is an important part of the movie and of Adam’s darkly comic journey, but it’s not the focus. And maybe that’s why it works.

One thing that immediately becomes apparent in “Prime” is that Jewish mother, Lisa (Meryl Streep), a therapist, is not overly caricature-ish. Lisa wants her son David (Bryan Greenberg) to marry a Jewish girl, and he seems to be okay with it — at least at first. There’s a bit of talk that Lisa doesn’t support her son’s career as an artist, but the real problem between the two is that she doesn’t understand that he truly has talent. The main plot is a romance between David and an older woman, Rafi (Uma Thurman), who is a patient of Lisa’s. Unfortunately, the romance is bland, but the relationships and resolutions seem honest. A better movie would have been about the arc of the mother-son relationship, and how Lisa and David gain a better understanding of each other; that movie is in there, just subdued.

The twice-divorced, sci-fi-writing son, played by the film’s director, Albert Brooks, in “Mother,” may be named John Henderson, but who is anybody kidding? John is definitely Jewish, as is his brother, Jeff (Rob Morrow) — and both are hungry for the approval of their mother, Beatrice (Debbie Reynolds). Although this sounds familiar, these characters have more to them than meets the stereotype. First, unlike the typical rendering of a Jewish mom, Beatrice is withholding rather than intrusive. And son John’s quest is to find out why he’s drawn to disapproving women.

He moves back in with Beatrice, in the guise of “an experiment”: to figure out why her maternal bearing is as sweetly iced as the 3-year-old sherbet she keeps in her freezer. It turns out that the answer could have been found in a chapter of” The Feminine Mystique”: Beatrice is a frustrated writer, resentful of having been relegated to the role of housewife and mother, and therefore especially resentful of her son the writer’s career. Epiphany completed, John goes on to meet a woman who is a fan of his books — and Mother starts writing.

As you would expect from a movie adapted from a Neil Simon play, “Brighton Beach Memoirs” abounds in both stereotypes and humor. Smart-alecky teenage son Eugene (Jonathan Silverman) and his no-nonsense mother Kate (Blythe Danner) drive each other crazy, but also treat each other with warmth. “What am I going to do about him?” Kate laments to her sister while Eugene tells us, on his way to yet another mother-directed errand, “If I grow up twisted and warped, the world will know why.” Still, there are more pressing problems to occupy this mother and son than the nature of their relationship, such as the Depression, illness in the family and having to provide for other relatives. In comparison, the self-esteem issues of the son in “The Guilt Trip” seem like a self-indulgent walk in the park. But who are we to judge?

Like “The Guilt Trip,” “Garbo Talks” is about a son’s quest on behalf of his mother. In this case, passive son Gilbert (Ron Silver) becomes determined to grant his terminally ill mother, Estelle (Anne Bancroft) a last wish: to meet her idol, Greta Garbo. As Estelle puts it: “Why shouldn’t I get to meet her? I’m dying.” And who better to make this happen than her only son, an accountant who gets no respect but often comes forward to bail his leftist mother out of jail for misguided activist pursuits? Estelle is larger-than-life, boundary-averse and a pain in the neck. Although she loves her only son dearly, she didn’t attend his wedding because she didn’t want to cross a picket line. Yet thanks to Bancroft’s tour -de-force portrayal, Estelle’s character rises above caricature. Unfortunately, the same can’t be said of Gilbert, who, like Rogen’s character in “50/50,” Andrew, seems to be phoning in his Jewish mother’s son performance for most of the film. Yet as he gets closer to finding Garbo, Gilbert sheds his good Jewish boy cocoon and metamorphoses into a man who finally stands up for himself.