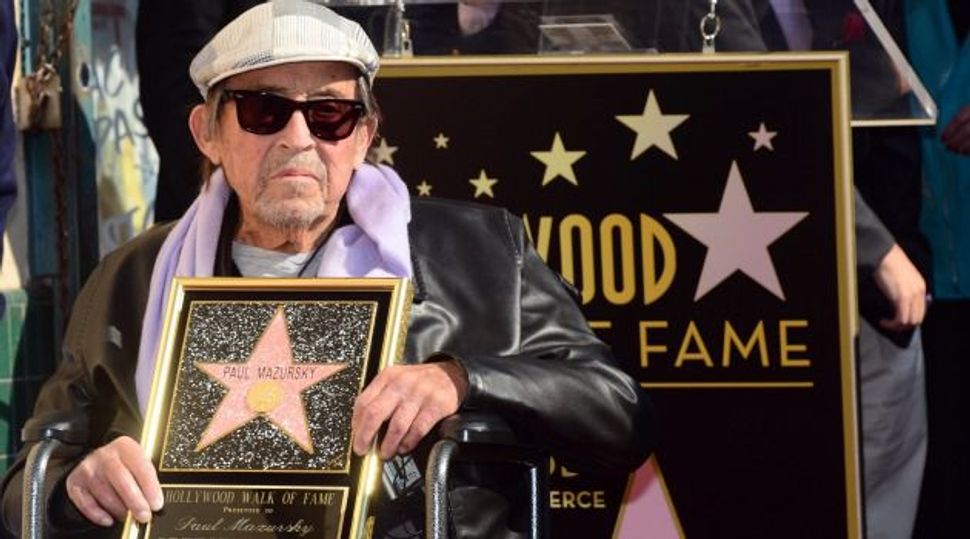 Paul Mazursky poses during a ceremony honoring him with the 2,515th star on the Hollywood Walk of Fame in 2013. Image by Getty Images

“George Segal was great; I used to call him my Jew. I had two great Jewish guys that played my Jews — Georgy and Richard Dreyfus, both complicated guys. All the actors I worked with underneath it, were me, some form of Jew.”

A master of the Borscht Belt gag-line – in a 2011 review of “The Iron Lady” in which Meryl Streep portrayed Margaret Thatcher, Mazursky addressed Streep: “I await your next triumph. A real challenge would be Adolph Hitler; I know you can nail that sucker!” Yet often in his films, Mazursky sidestepped belly laughs for more bittersweet, artistically yearning statements, in part responding to an intensely cultural upbringing by his mother, Jean Gerson, a piano player for dance classes, who also served as the model for overbearing Jewish mothers in films such as “Alex in Wonderland” (1970) and “Next Stop, Greenwich Village” (in the latter film portrayed unforgettably by Shelley Winters). Mazursky explained wryly to Filmmaker Magazine:

“My mother was bipolar and sometimes she would have her up days and sometimes her bad days. She would always take me to art-house films and I loved her. So I’ve always felt very close to women. I have been married for over 60 years, and 28 of those years were just wonderful.”

Mazursky’s films testify to his experience as a Brooklyn Jew coming to terms with European culture. An early viewing of Federico Fellini’s autobiographical comedy-drama “I Vitelloni” (1953) made him resolve to make highly personal films about his own life. For years Mazursky toiled on a never-to-be-achieved adaptation of Bernard Malamud’s “Pictures of Fidelman,” (1969), a short story collection about Arthur Fidelman, a Bronx Jewish art student who travels to Italy to become a painter. One of Mazursky’s later voyages in search of the European past was his self-funded (the complete budget was $40,000, he proudly announced) 2006 documentary “Yippee: A Journey to Jewish Joy,” about the annual Rosh Hashanah pilgrimage by Orthodox Jews to the grave of Reb Nachman of Breslov in Uman, central Ukraine.

Serendipitously inspired to choose this subject after a conversation with his optician, Mazursky’s artistic decisions could sometimes appear lighthearted, as when he accepted producers’ decisions to cast his unsuccessful “Scenes from a Mall” (1991) with the publicity-grabbing stars Woody Allen and Bette Midler, instead of the subtler actors he originally had in mind, Kevin Kline and Meryl Streep. Yet he was also capable of sensitive casting, as when he rejected the overfamiliar Jimmy Stewart as protagonist in “Harry and Tonto,” preferring the apparently more whimsical, but ultimately more touching, Art Carney. Mazursky had seen Carney perform a somber role in the 1957 domestic tragedy “The Rope Dancers” by Morton Wishengrad, and knew the actor’s range.

Mazursky’s films radiate such admiration for actors and understanding of their vulnerabilities. His memoir “Show Me the Magic” (1999) describes his own early struggles as a performer, after studying method acting in the 1950s with Paul Mann, an actor blacklisted by the McCarthy witch-hunt. Mazursky’s film debut was as a glowering soldier in Stanley Kubrick’s surprisingly routine first feature, “Fear and Desire” (1953), for which he changed his first name to Paul. He also played a high school delinquent in “The Blackboard Jungle” (1955) and continued to appear in small roles in “A Star Is Born” (1976), “History of the World Part I” (1981), “The Sopranos” and “Curb Your Enthusiasm.”

Remaining close in spirit to actors, Mazursky turned filmmaking into an eternal return to his own past. In his youth admiring the comic Lenny Bruce, who Mazursky claimed “looked like a Jewish Turhan Bey,” he was delighted to hire Bruce’s mother Sally Marr (born Sadie Kitchenberg) to play a key role at the end of “Harry and Tonto.” Receiving some belated honors such as a star of the Hollywood Walk of Fame in 2013 and a lifetime achievement award from the Writers Guild of America Grill in 2014, Mazursky confronted his failing health with typical comic resolve. He made videos posted on YouTube of mock interviews with old friends, including Leonard Nimoy and Mel Brooks, which are less outright risible than courageous in their resolve to continue joking in the face of mortality, a message already conveyed by his decades of filmmaking.