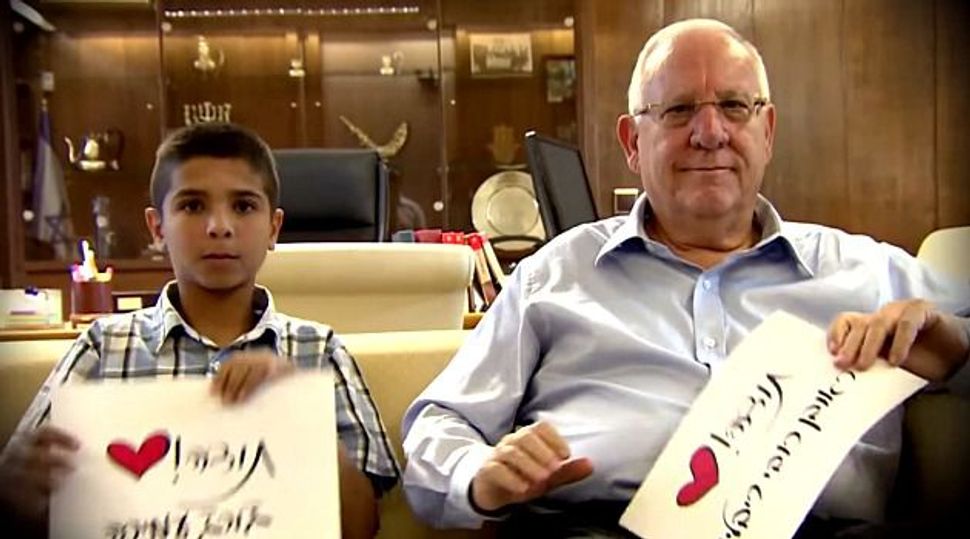 When it comes to Israeli-Palestinian relations, there’s much to be cynical about lately. The 50-day long carnage resulting from Operation Protective Edge this summer, the frozen peace process, the dueling speeches by Netanyahu and Abbas at the U.N. — and then there’s the festering issue of Israel’s minorities.

This week, Israel’s new president has come out with a touching video demanding that Israeli society replace racism, intolerance and thuggery with unity, tolerance and empathy. According to the president’s Facebook page, President Reuven (Ruby) Rivlin approached 11-year old George Amira after seeing a video the boy had created from his own experience at the hands of schoolyard bullies. The president invited the young Jaffa resident to his office and suggested they collaborate on a similar video with a country-wide message of hope. 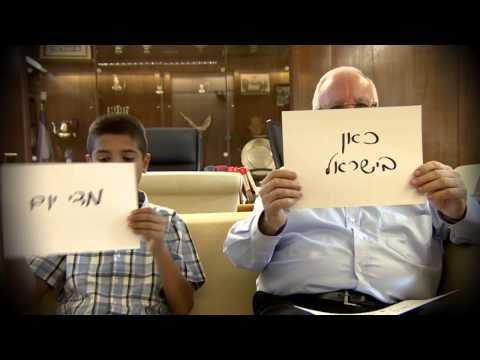 “Speaking up against violence is everyone’s responsibility,” the president’s Facebook posting said. “We can see it intensifying in our society, and we must stop it,” he continued.

I could be cynical while watching President Rivlin’s video. But I’m not.

I could be cynical because it comes on the heels of the bloody war in Gaza, where 500 kids — some of whom could be cousins, at least metaphorically, of the young George Amira — lie dead. I could be cynical because, as international opinion turns against Israel as boycott and divestment initiatives intensify, it’s easy to expect Israel either to batten down the hatches and ignore the plight of the suffering from within, or else to expect Israel to do what it can to callously burnish its image.

It’s easy to retreat behind walls of siege — whether by invoking the Iranian threat, the all-too-recent memory of Hamas rockets, or the looming menace of the Islamic State. It’s easy to boast about one’s own record: look how many Arabs sit in the Knesset, look how much better our minorities are treated than in the states surrounding us in our tough neighborhood. We’ve heard this all before.

But it’s much harder to look in the mirror — as Amira’s anti-bullying video demanded everyone do — and demonstrate empathy for the Other.

I arrived at the video courtesy of Corey Gil-Shuster, himself a bit of an internet sensation with his person-on-the-street videos asking Israelis and Palestinians what they think of each other. After Gil-Shuster linked to the president’s video on his own Facebook page, I asked him what he thought. “This is a society where minorities have to be proactive in entering the circle of Israeli society,” Gil-Shuster said. “Gays pushed their way in because no one would invite them. But Arabs won’t push their way in and the burden is on leadership to include those who feel they are at the fringes of society.” Gil-Shuster, who is himself a gay citizen of Israel, having arrived from Canada, knows a thing or two about having to work one’s way into this society.

Admittedly, Amira’s initial video revealed that his bullying had been of the homophobic and sexist variety, rather than necessarily targeting his Palestinian identity. And perhaps it was the gender aspect — rather than the ethnic aspect — that enabled Rivlin to more swiftly reach out to him. George Amira is a Palestinian citizen of Israel, but one is hard pressed to find much attention — in the video or in the accompanying press coverage in Israel — to this aspect of his identity.

Still, Rivlin’s initiative went beyond what might be considered the safer space of anti-homophobic activism. The president’s video directly condemns racism in Israeli society, while acknowledging that it is indeed, sadly, alive and well. And the visuals — of a small, Arab boy sitting next to a hefty, Ashkenazi Jew who has reached the establishment pinnacle — are striking. And timed as it is with the Jewish New Year, with direct mention that “this year we will act,” one can only be struck by the fact that this is a call to action by the powerful to change the status quo, however long and winding the road.