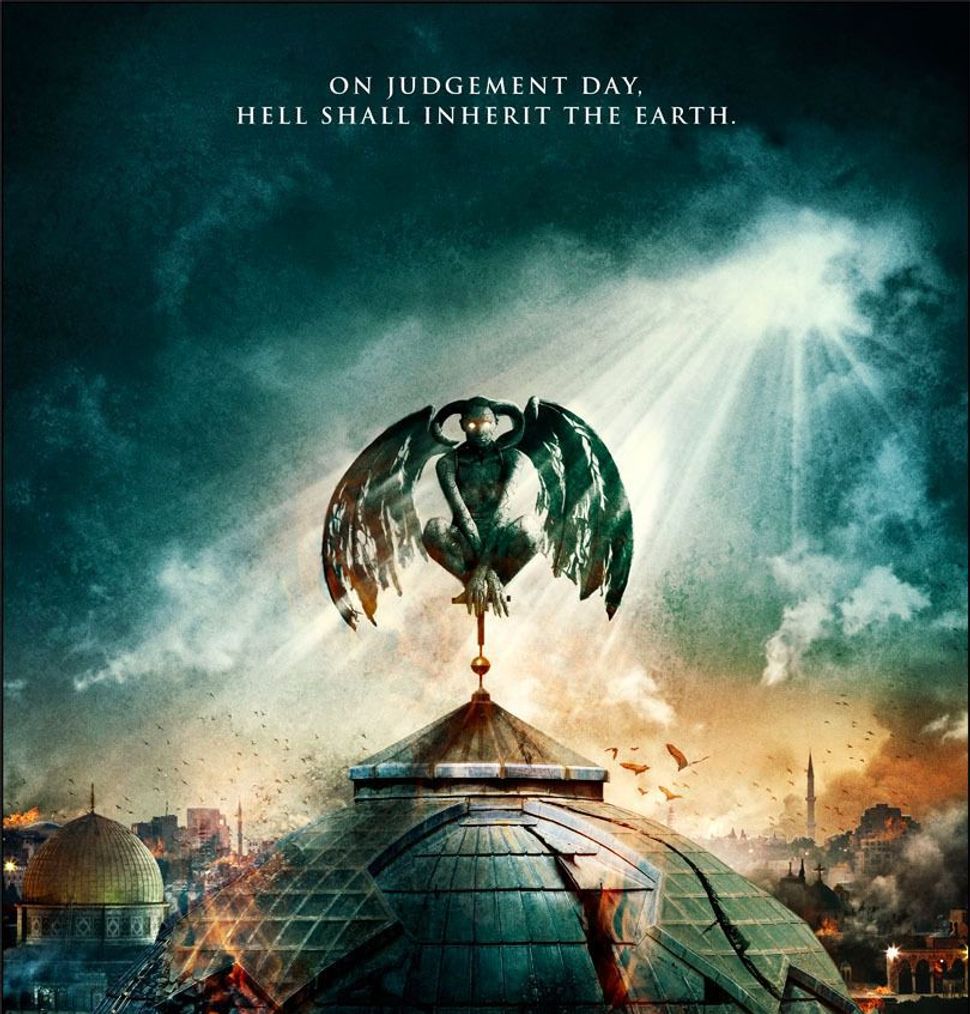 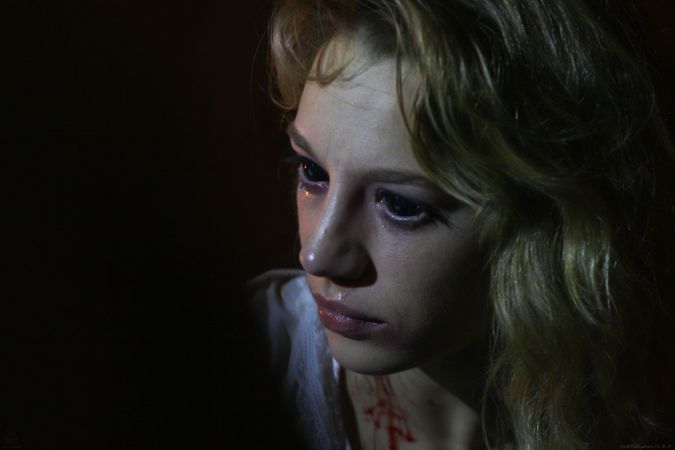 Image by The Paz Brothers

At the recent Jerusalem International Film Festival, the Israeli horror movie “Jeruzalem” was scheduled to premiere right after “From Caligari to Hitler,” a German documentary based on Siegfried Kracauer’s book of the same name. Kracauer was a Jewish writer and critic who escaped Nazi Germany. In his book, he analyzed Weimar-era German cinema and theorized that its black-and-white monsters, vampires and evil masters prefigured the emergence of fascism (see “Nosferatu,” the Dr. Mabuse films and “The Cabinet of Dr. Caligari”). The artists and filmmakers, whether or not they were conscious of it, intuited the rise of evil and captured it in oblique Expressionists’ angles — a snapshot of the German psyche.

Like the Weimar cinema before it, Yoav and Doron Paz’s new film about a zombie Armageddon projects a sense of impending catastrophe, an equal-opportunity disaster for Jews, Arabs and others in the eternally embattled city. “Jeruzalem” is as engrossing and entertaining as any movie featuring winged monsters and giant demons can be, but it is hard not to read it as, also, a sharp commentary on the current Israel’s self-destructive policies. Zombies are but a metaphor for what will take place should the so-called Israeli-Palestinian conflict not be resolved.

The trouble is foreshadowed in the very first frames of the film. On screen, the corpse of a Jewish woman is transformed into a murderous winged zombie, and no one can exorcise it — not priests, not imams, not rabbis. But that’s in the past; in the present, everything seems to be in order. Sarah and Rachel (Danielle Jadelyn and Yael Grobglas), two pretty Jewish girls from New Jersey, are about to embark on an exciting trip to Tel Aviv to surf and party. 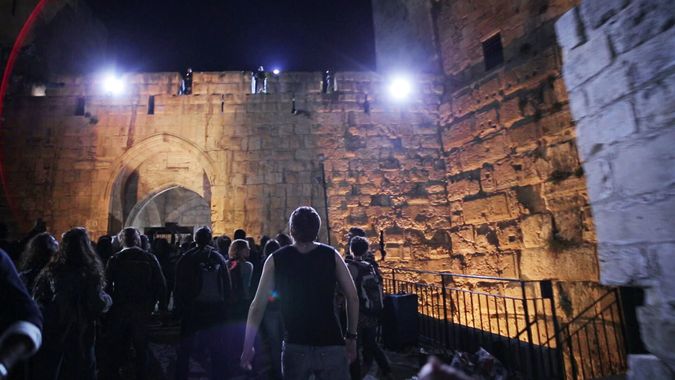 Apocalypse There: The film ‘Jeruzalem’ depicts a zombie Armageddon. Image by The Paz Brothers

Sarah is grieving over the loss of her brother, but she is looking forward to the trip, trying out her new smartglasses. The film is shot entirely through her point of view, with Skype calls, Facebook and video game windows visible to us in the corner of the screen. Consequently, the frame is shaky and partial, and the picture is subjective and confusing, which works well for a horror movie. Although not exactly a character, with their navigation and face-recognition functions the smartglasses play an important role in the film.

The first part of the film looks like a promotional video for Israeli tourism. Sarah and Rachel, giddy about the upcoming adventure, meet an attractive fellow passenger on the plane. Kevin (Yon Tumarkin) is an anthropology student, intent on researching mysterious cases of resurrection in Jerusalem. The girls join him for a stay at the picturesque hostel in the Muslim quarter — right in the heart of the Old City. The charismatic proprietor, Omar, hits it off with Rachel, and the four young people embark on a fabulous Jerusalem adventure: historic sites by day, parties by night. As they frolic through the city, they meet a cast of colorful local characters — Israel Defense Forces soldiers who patrol the quarter; a beggar who fancies himself King David, and a motley crew of vendors, thieves and tourist guides. All the dialogue is in English, allowing for over-the-top accents and stereotypes. This is horror that is more “Shaun of the Dead” than “Dawn of the Dead.”

Things start unraveling when the foursome arrives at the Western Wall, and Sarah stuffs into its cracks a mocking note to God: “Bring back my brother, asshole.” By that time, Kevin is afflicted by “Jerusalem syndrome” — a kind of madness known to affect visitors to the Holy City. His fears that the Gates of Hell are about to open are out of control. Alas, his paranoid premonitions start coming true, as the Old City is shaken by a series of explosions. Everyone is ordered to evacuate, and chaos ensues. But this is not your run-of-the-mill terrorist bombing; flying zombies and roaring giants wreak havoc on the city. As the four try to escape, we see the same historic sites from the earlier scenes, through Sarah’s viewfinder: the narrow streets, the abandoned buildings and the ancient underground tunnels — the only remaining escape route. Zombies attack, their strikes turning people into monsters, as is the convention of the genre. Blood, wounds and fire fill up the screen to a soundtrack of screams and sirens.

Image by The Paz Brothers

Ironically, aside from the supernatural elements, these scenes of attack look oddly familiar. The same bloody horror prevails on the screen of more realistic Israeli films, such as Erez Tadmor’s “Wounded Land,” depicting the aftermath of a terrorist act. Of course, it’s political violence, not the invasion of the undead, that’s killing Israelis and Palestinians in this film, but the sounds and the visuals, and, more importantly, the meaning, are the same: twisted car frames and rubble; bloodied body parts flung across streets; Jews and Arabs at each other’s throats.

Clearly, ”Jeruzalem” and other Israeli horror films tap into much bigger ideas than our fear of the supernatural. The emergence of horror films is one of the most recent and most interesting developments in Israeli cinema in general. Ever since the first Israeli horror film, “Rabies,” took Tribeca by storm in 2011, “Cannon-Fodder, “Poisoned,” “Big Bad Wolves“ and now “Jeruzalem” present us not only with spectacles of blood and gore, but also with allegories of the distinctly Israeli reality in which they are set and that they satirize. As such films succeed in conjuring an apocalyptic future, and approaching it with black humor (appropriately so), questions emerge: Is this a form of escapism or a moral summons? Is it entertainment or a call for action?

For now, the Israeli film establishment, which traditionally supports so-called “quality cinema,” still shuns genres, and films like “Jeruzalem” get little public funding, if any. The Paz brothers should be commended for pulling off an impressive film with such a low budget: They shot the film on $160,000 in just two weeks. This meant being creative and relying on the help of their friends and family (including their father, Jonathan Paz, a veteran Israeli filmmaker). “But the low budget had its advantages,” Yoav Paz explained at a discussion during the Jerusalem Film Festival. The small crew enabled them to shoot everything on location — including scenes at the Church of Holy Sepulcher, Via Dolorosa and even the Western Wall — something that a Hollywood production couldn’t have done. There was also little distraction in the Old City when the brothers were filming (used to cameras, locals paid no attention to them), which allowed them to shoot exterior scenes in the film’s observational style. Also, Paz added, “extras were free — they were just people walking in the street.”

If the film funds are slow to recognize the new trend, the festivals are on the ball. The fact that “Jeruzalem” was included in the competition for the best Israeli feature film is a sign of recognition. So is the emergence of new venues, such as Utopia, which is Tel Aviv’s international festival of genre films. Increasingly, Utopia features local productions. Needless to say, Israeli horror films are also well represented at the international arena, where they are appreciated for their originality and their surprising turns. “Jeruzalem” will be shown at other film festivals, and has already received distribution in several countries in Europe and Asia. The Paz brothers are planning for a limited release in the United States and then on Netflix. Unless, of course, something bad happens, as Doron Paz has quipped: “If the Gates of Hell open here in Jerusalem, it will be terrible, but it will be great PR for our film.”