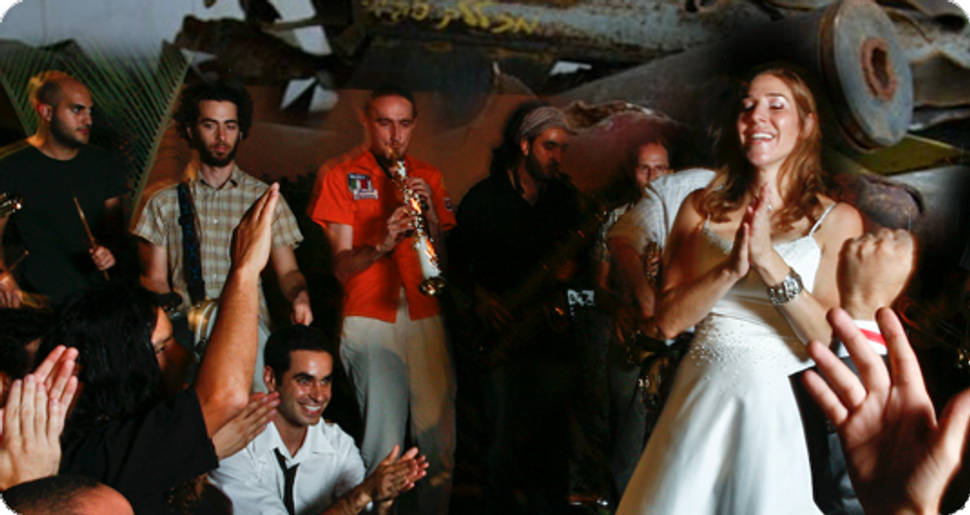 Everyone should be able to agree on Sderot. Leftists, rightists, Jews, non-Jews. A small settlement of folks — unwanted by the countries they’d lived in for centuries, and thrown together in an inhospitable land within internationally accepted boundaries by the will of the central government — have combined to make a vibrant community whose musical output has transformed the region’s culture.

Despite being showered by rockets from a nearby area — where the vagaries of 19th century European nation building and 20th century Arab despotism have left a neighboring community isolated, desperate and ruled by extremists — the inhabitants have pulled together. Years of attacks have taken their toll, though: psychologically, economically and politically. And disparate ethnic communities by-and-large unite even as technological innovations break down the traditional communities that have held society together. And, that society, mostly, stays open-minded while media and social media provide insulation and context that makes their plight seem an acceptable cost to those watching.

And as it goes for Sderot, with its Moroccans, Algerians, Ethiopians situated in internationally recognized Israeli borders, 15 seconds rocket journey away from Gaza. So it goes for Israel as a whole, with its Poles, Russians, Indians, Americans, French and Palestinians well within M-302 range of Gaza.

This is the context of “Rock in the Red Zone” a new film from Laura Bialis that had its U.S. premiere at the Other Israel Film Festival on Saturday November 7.

When I visited Israel in the summer of 2010, a heavily pregnant Bialis showed me around Sderot, a town of about 20,000. I wrote about the “Capital of Rockets and Rock” and noted how its inhabitants aspire to post-traumatic stress disorder with its implication that they would at least then be “post-trauma” rather than in the middle of compounding a never-ending seeming series of traumas.

I wrote then that:

Once, when Sderotis wanted to escape the threat of the 15-second alarm, they could go to Ashkelon for coffee and a stroll. Now the rockets can reach Ashkelon, Ashdod and Beersheva.

But what was inevitable in 2010 has now come to pass. As we saw in the summer of 2014, those rockets can reach Jerusalem and Tel Aviv. Bialis’s footage of civilians running for cover in Tel Aviv during that summer conflict is chilling not because the destruction there matches that which we know occurred in Gaza (it doesn’t), but because the preceding hour of footage shows us how constant rocket attacks erodes compassion.

The intense musical output of Sderot used to reflect the melting pot that comprised the town. Knesiyat Hasekhel, Sfatayim and Teapacks (and others) overcame the town’s inferiority complex with a flourishing fusion of rock, eastern music and Israeli sensibility. More recently musicians have retreated from politics and looked to faith or feelings: the music tends to be escapist, directly protest-oriented or a more indirect consideration of the specific human condition of a Sderoti under constant attack. There is still, however, room for romance: Bialis covers the story of Hagit Yaso, the young Ethiopian woman who won the ninth season of “Kokhav Nolad,”(“A Star is Born”) — the Israeli equivalent to American Idol. Her parents had sacrificed everything to get to Israel and have the bittersweet reward of Hagit’s success and a home in Sderot to show for it.

Sadly for the film, there’s little new to report. Hagit’s story and the rockets in Tel Aviv are two of the few things that have happened since I was in Sderot. Sadly for Israel, though, the same is true for the country. Nothing of substance has changed. There’s no plan to change a status quo that gives Sderotis a maximum of 15 seconds to escape a Qassam rocket fired in from Gaza.

But, as Teapacks put it, riffing off an old Israeli folk song, “I still live, live, live.” And life does go on. Bialis shows her young daughter in Sderot. And the film is, too, at last on public release to convey what it feels like to live two miles from people who are constantly prepared to launch rockets at you. (As if the Lower East Side of Manhattan were shelling the Statue of Liberty, as if Berkeley was launching ordinance at the Mission District, as if the denizens of Wrigley Field were looping Qassams onto The Art Institute of Chicago, as if Santa Monica were trying to wipe Pico-Robertson off the map).

The soundtrack is a fittingly diverse and high quality backdrop to a tragedy that, as Amos Oz puts it, is about two sides with just causes. Sderot stands out because of its remarkable musical output; but it shouldn’t have to stand out at all. Gaza and Sderot should be free to achieve nothing at all while not firing or receiving rockets. A perfectly happy ending for the film would be no rock, no red zone.

“Rock in the Red Zone” will be on exclusive theatrical engagement in New York City from Nov. 12-19 at Cinema Village and then in Los Angeles at the Laemmle Theaters beginning Dec. 2.