A Jewish Newsman Takes the ‘Spotlight’ 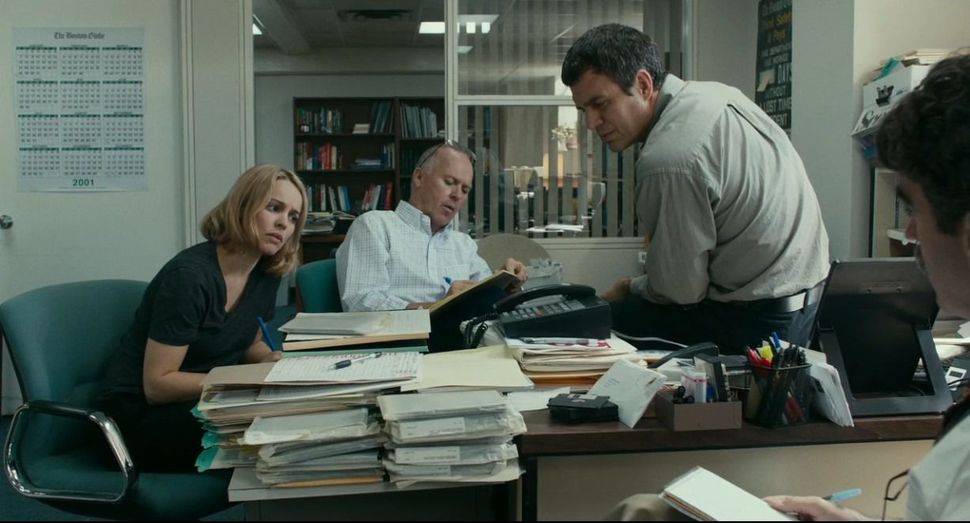 The film “Spotlight,” which chronicles The Boston’s Globe’s 2001 investigation into sexual abuse by priests in the city’s archdiocese, is about shake-ups and interlopers, about questioning beliefs and authority. These issues are raised by the film’s most powerful character, who receives a surprisingly small amount of screen time.

Marty Baron, played by Liev Schreiber with a beard and messy, brown hair, became the Globe’s editor after leaving the Miami Herald in summer 2001. He would remain at the Globe until 2012 when he left to take over the position of executive editor at the Washington Post.

At the beginning of the film, directed by Tom McCarthy from a script he co-wrote with Josh Singer, Baron reads a column in his new paper about a sexually abusive priest, then questions the Spotlight team, a group of four investigative reporters, about why they hadn’t dug into the allegations and why the court had sealed the documents.

As portrayed by Schrieber, Baron possesses a quiet but intelligent mind. He says little, but what he chooses to articulate holds a great deal of weight.

“The Boston priests molested kids in six different parishes over the last 30 years. The church found out about it and did nothing. We haven’t committed any long-term investigative resources to the case,” he says at one point.

Still, despite the gravity of the story his reporters are covering, Baron rarely displays emotion. His ability to think patiently and choose words carefully left me in awe, as a journalist, more than the scenes of the Spotlight team knocking on doors or having those doors slammed in their faces.

One of the film’s recurring themes is that Baron is an outsider, for being both a Jew and new to Boston, a city where almost half the population is Catholic, including the Spotlight team — which is composed of self-proclaimed lapsed Catholics. Because the film follows a true story and real people, it wasn’t a conscious decision to cast Baron as a Jew, of course, but the movie does emphasize his otherness.

Yet Baron represents the outsider not for being Jewish as much as for sensing something amiss and having the audacity and curiosity to question a structured and trusted organization. He’s not someone trying to fit in — we learn early on that he doesn’t like baseball, a letdown to the film’s and the editorial staff’s Red Sox fans — but a man who has the ability to push his reporters down a path they seem reluctant to take. It turns out that several main sources had sent materials and a list of survivor names five years prior, but Spotlight editor Walter Robinson buried the news in the metro section.

Baron remains unchanged throughout, all while shifting the worlds and people around him. In one scene, he visits Cardinal Bernard Law, the man The Globe eventually discovers has been covering up priests’ molestations, in his office. Law gives him a departing gift, which Baron opens in his car and receives with an amused smile. It’s a catechism book.

That’s not to say Judaism doesn’t proselytize or Baron doesn’t urge his subordinates to think differently. But unlike Law, he isn’t interested in changing the lives of a few individuals; he wants to expose an entire system “from the top down.”

Midway through the film, the Spotlight reporters gather in Baron’s office to show him a list they have compiled of 90 priests who molested adolescent boys. The number had shocked the reporters when it was only 13 names. But Baron wants more. He instructs the team to get evidence that Cardinal Law knew about the crimes and covered them up.

Baron himself sits at the helm of a hierarchical system, one in which his underlings are wary of his decision to investigate the Catholic Church, but not cautious enough to stall or disobey. He only appears a handful of times in the film, yet his presence is pervasive. At the end of the film, Robinson and Rezendes speed-walk into the office the Sunday after the investigation appears on the front page and the paper is dropped at doorsteps all across Boston. They want to check phone messages.

The camera pans past clunky PC computers and drab cubicles as they rush to their lair downstairs. Behind them, looking toward the audience, sits Baron alone in his office. His head is a small speck in the background; I barely caught him in the frame. He looks up, and that’s the last we see of him before the film ends with a shot inside the Spotlight room as the phones ring and ring.

A Jewish Newsman Takes the ‘Spotlight’