How ‘The Birdcage’ Married Jewish and Gay Civil Rights 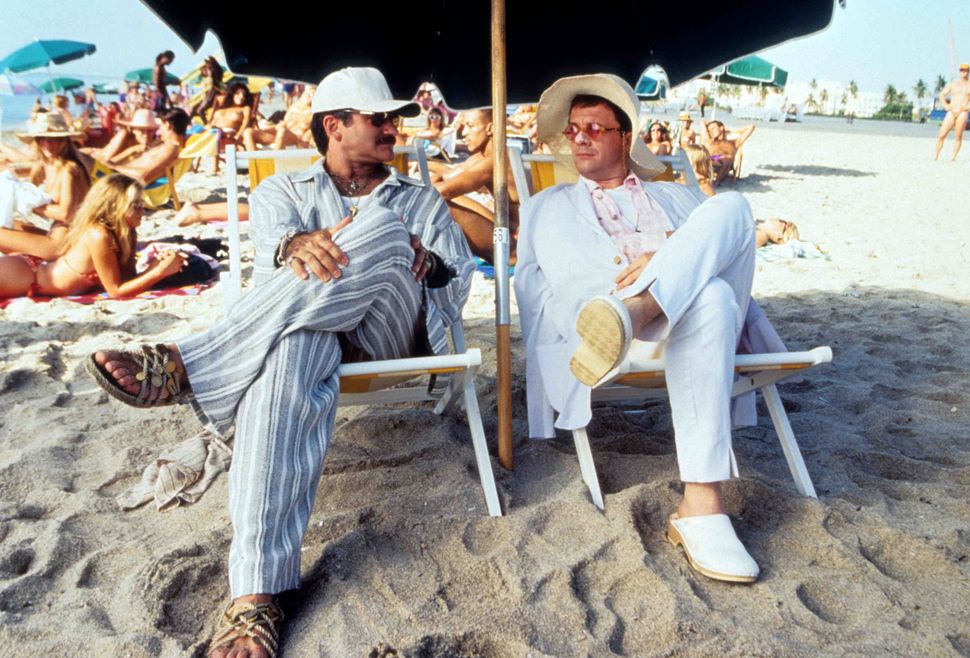 ‘I see my tiger robe on television,” my mother says to me on the phone. “What am I watching?” I pause for a split second to think. I’m about 1,300 miles away from her. But I know: “The Birdcage.”

She’s talking about the scene in the now iconic 1996 comedy where Robin Williams’s character, Armand Goldman, is sitting and reading the newspaper in his kitchen one morning, a robe printed with a tiger’s face tied around his waist. My mother has been known to sit in her kitchen reading the newspaper in a caftan of the same print, and my father never fails to point it out when we watch the movie: “Hey, Rani, that’s your robe!” While my father tends to lean toward action movies to watch on a lazy Sunday afternoon and my mother prefers 1950s musicals, we all watch “The Birdcage” together because we know the laughs that await us.

“The Birdcage” follows the Goldman family: Armand, a gay nightclub owner; his partner Albert, who, played by Nathan Lane, stars as a drag queen at the club, and their son, Val (Dan Futterman). Val comes home to announce not only that he is getting married, but also that his fiancée, Barbara (Calista Flockhart), is the daughter of a right-wing conservative senator, Kevin Keeley (Gene Hackman), who is coming to visit the Goldmans in a few short days with his prim and proper wife, Louise (Dianne Wiest). In hopes of protecting Val’s relationship, the Goldmans do their best to disguise not only their lifestyle and orientation, but their religion, too, changing their name to Coleman for the evening. Hilarity ensues as they try to maintain the charade.

In what is perhaps my favorite scene in the film, Armand does his best to teach the very flamboyant Albert how to act “manly” in front of the Keeleys while sitting in a cafe mere hours before their dinner that evening. They start with spreading mustard on toast. Albert picks up the toast, pinky waving high, and daintily dribbles the condiment across the bread with a spoon — and Armand interjects right away.

“You take your knife, and you smear,” he says, lowering the register of his voice. “Men smear.”

Albert attempts a smearing, only to break his toast in half, shrieking, and almost reducing himself to tears: “I pierced the toast!!!”

The scene, and really the whole film, is comedy gold. We stop in our tracks whenever the movie is on television, and no matter where it is in progress, we watch it through to the end. In my family, the film’s jokes became our inside jokes, and when my mother mentions that her friends the Colemans (a real couple she knows) are coming over, I always interrupt her: “I’m sorry, is it Coleman or Goldman?” When I am having a rough day, I will swoon and tell my parents, “Get me my Pirin tablets!”

This year marks the 20th anniversary of “The Birdcage,” which is actually a retelling of the 1978 French-Italian film “La Cage Aux Folles,” based on a 1973 play of the same name by Jean Poiret. “La Cage Aux Folles” itself was incredibly successful in its first three forms, running for more than 1,800 performances as a play, then as a Golden Globe-winning film that spawned two sequels, and then as a Broadway musical adaptation, which won several Tony awards.

Then, in 1996, the famed comedic team of director Mike Nichols and screenwriter Elaine May took it to the American screen under another title. “The Birdcage” was a box office smash, staying at No. 1 for three weeks after it opened. In 2000 it was added to the list of the American Film Institute’s “100 Years… 100 Laughs” collection of the funniest films of all time.

The New York Jewish Film Festival actually included the film in its 2015 lineup to honor the passing of both Williams and Nichols the previous year, as well as the film’s Jewish twist. In the original version of “La Cage Aux Folles,” after all, the characters aren’t trying to disguise themselves as gentiles. But in “The Birdcage,” their Jewishness is a running theme: from the story’s setting in Florida’s South Beach, long identified as a haven for Jewish vacationers or expats from colder climes; to Armand sporting a Star of David; to the use of Yiddish in the dialogue that cements the characters’ identity, and much more.

I remember seeing the film when I was younger and connecting to this aspect of it. I think the only other film I had seen with actively Jewish characters by the time I saw “The Birdcage” was “Funny Girl.” No, I wasn’t a middle-aged gay man, but I saw myself, my background, in characters who clearly believed what I did, and as a young Jewish person I don’t think that’s something I saw often enough. I remembered feeling real, acknowledged. My parents, who grew up first vacationing and then living in South Florida from their native New York, love the film for that reason, too.

Aviva Weintraub, director of the New York Jewish Film Festival and the associate curator at The Jewish Museum, believes the film is all about this feeling of acceptance.

“In addition to looking at stereotypes of gay people, the film looks at stereotypes and issues about Jewish people,” she said. “I think the beauty of the film overall probably is that the most bigoted and small-minded character, played by Gene Hackman, needs the assistance of the people he so looks down on, and they show him that they have bigger hearts than he does.” It’s no secret that the film opens and closes with the legendary song “We Are Family” by Sister Sledge, possibly for this very reason. In “The Birdcage,” Jews are not just a faceless stereotype; we’re ingenious, creative, wacky, vibrant, warm and caring people who want to help the ones we love. And since “The Birdcage” is an iconic comedy, this image of Jewish people gets to last as long as others.

Elyssa Goodman is a New York-based writer and photographer.

How ‘The Birdcage’ Married Jewish and Gay Civil Rights