For Ronit Elkabetz, Being Human Was the Only Option 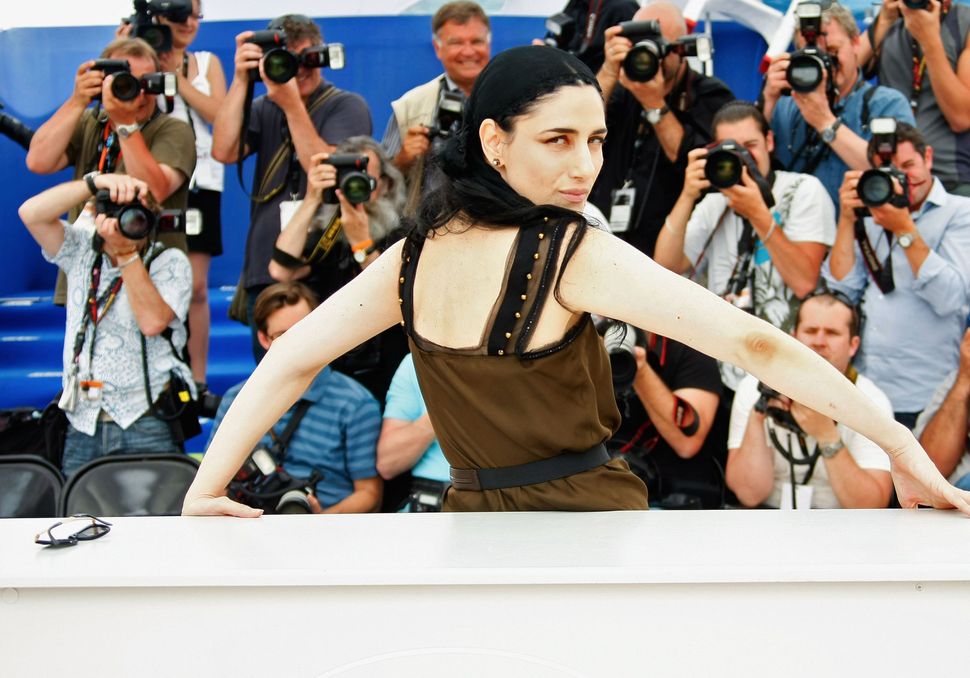 Looking Back: Ronit Elkabetz in Cannes, 2009. Image by Getty Images

The Israeli actress and director Ronit Elkabetz, who died on April 19 at age 51, was noted for her masterful portrayal of tragic figures with few or no exit options. Yet in life she retained powerful optimism about the restorative value of drama for bringing people closer together.

When she died prematurely of cancer, leaving behind a husband and four-year-old twins, she was planning a film project about the final year in the life of Maria Callas, whom she vaguely resembled. Callas, with her voice in tatters and abandoned by her paramour Aristotle Onassis, would have been an ideal role for Elkabetz, who in 2004 was praised by “Variety” for her “[Anna] Magnani-like power which suggests the makings of a legendary Medea or Phaedra.” With her brother Shlomi, she wrote and co-directed a much-praised trilogy of films about the marital miseries of Vivianne Amsallem, a Moroccan Jewish woman: “To Take a Wife (2004); “Seven Days,” (2008); and “Gett.” (2014)

Alternating between silent repression and outbursts of volcanic rage, Elkabetz incarnated a thwarted, oppressed life. At the start of her theatrical career, at France’s Avignon Festival she presented a one-woman show about the aged choreographer Martha Graham as a plaintive septuagenarian alcoholic. The willingness to follow a rock-strewn path to achieve artistic goals had led Elkabetz to Paris in 1997, hardly the best time for an Israeli transplant, with French anti-Semitism and xenophobia on the rise. Elkabetz landed an internship at the avant-garde Théâtre du Soleil, founded by the director Ariane Mnouchkine, of Russian-Jewish origin. Taking on domestic chores such as washing dishes and cleaning the theatre was part of the educational process, which Elkabetz claimed to relish.

Despite these travails, she certainly retained emotional ties to Paris. After the November 2015 Paris terrorist attacks, she appeared at the French Embassy in Tel Aviv to read a poem by Victor Hugo. With typical Elkabetzian verve, it was no dulcet comforting ode, but rather “Paris Blocaded,” about the 1870 siege of Paris during the Franco-Prussian War, a grim evocation of survival through vast sufferings. Contained within the sheer message of endurance is the hope of artistic renascence. Elkabetz was referring to a city, culture, and tradition as symbols of creative liberty which had evidently inspired her own work. Her own artistic message blended personal and historical tragedy, politics with individual human contacts in a Hugolian way.

Her sense of tradition was acute: “Seven Days” revealed passionate interactions of a Moroccan Jewish family with the violence of a tragedy by Federico Garcia Lorca. In 2011, she accepted the Prix Haïm Zafrani in Paris. It was named after the Moroccan Jewish historian Zafrani (1922-2004), who collected and preserved music and poetry of Morocco’s Jews. Elkabetz explained that Zafrani had been her father Elie’s teacher in Mogador, Morocco in 1949, inspiring him to follow a career in education there until he moved to Israel in 1963. For this event drenched in family lore, Elkabetz appeared convincingly costumed as a dutiful daughter. Her abundantly flowing jet-black hair was pinned up in a neat bun, and she wore a girlish lace dress, as if to assume a consciously filial role for the occasion. When this award named after his mentor was conferred upon her, Elie Elkabetz sighed and said that he finally understood what his daughter was working at. Due to his Orthodox observance, he had never seen any of her efforts. Making films was more than just a way of exploring family interactions for Elkabetz. Intensely devoted to exchange, cooperation, and mutual inspiration with other communities in film projects, for a quarter-century she used movies as a means of vanquishing suspicion and fear by the mutual recognition of a shared humanity. She concluded in her Zafrani prize reception speech that “being human is our only option on earth.”

Although a short documentary would be directed in 2010 by the Haifa-born filmmaker Nir Bergman, “Ronit Elkabetz: A Stranger in Paris,” there are doubts about just how much of a stranger Elkabetz remained in the City of Lights. Her spoken French was in many ways more communicative than her English. Emotionally allied to the Mediterranean aspects of Gallic tradition, Elkabetz was in her element with seductive aspects of communication à la française. Charismatic, glamorous, she had the chic, allure, and captivating eyes of the French Jewish singer Barbara (Monique Andrée Serf (1930 –1997). Last year Shlomi Elkabetz told “Film Comment” that part of the directorial inspiration for “Gett” was from the 1928 silent French film classic “The Passion of Joan of Arc,” starring Renée Jeanne Falconetti, whose iconic mute sufferings clearly influenced Elkabetz.

However many European divas she may have resembled, her intense need to brave an uphill climb kept her in firm contact with earthly matters. In a 2008 interview with EuroNews, she implied that it was natural for her to express societal and individual issues onscreen, since Israel is a country “born under the cameras.” She spoke of the precariousness of life, how in Israel even a calm café or an intimate conversation is not really calm because things “may explode from one moment to the next.” She discussed the difficulty of “being born and raised in a country at war, and growing old in country at war.” The last-mentioned challenge was spared Elkabetz, much to the regret of her many admirers.

For Ronit Elkabetz, Being Human Was the Only Option