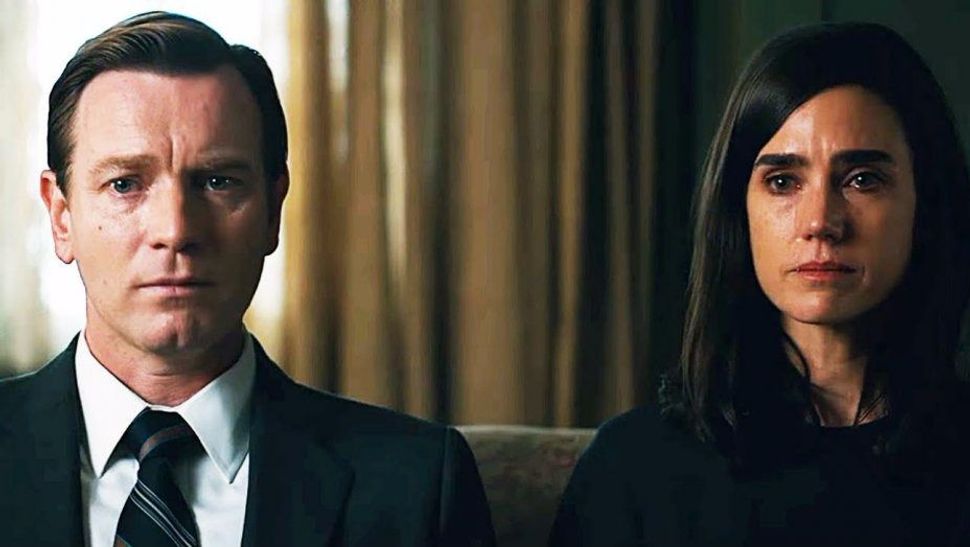 If there’s one moment that bugs Philip Roth more than any in “American Pastoral,” the new film adaptation of his explosive Pulitzer Prize-winning 1997 novel, I’m guessing it’s this one: During an overwrought scene of domestic conflict between Newark’s one-time golden boy Swede Levov and his bilious, radical teenage daughter Merry, the camera lingers on Merry’s bedroom wall. There, we see a flyer for a Lenny Bruce show and also, prominently displayed, Milton Glaser’s classic psychedelic Bob Dylan poster.

It’s almost as if some prescient and subversive set decorator wants to send the viewer a message — if you’re looking for Nobel Prize-caliber literature, skip the source material for this scene and check out the guy on the poster.

“American Pastoral,” adapted by John Romano (“The Lincoln Lawyer”) and directed by Ewan McGregor, who also stars as Swede, is the third adaptation of a Roth novel in the past two years and the eighth overall. Unlike many of his contemporaries — Edna O’Brien and Toni Morrison come to mind — Roth holds significant Hollywood appeal. Why this may be isn’t entirely obvious. Of course there’s the literary pedigree. There’s also the passion and moral fervor of the writing itself. And we shouldn’t underestimate the appeal of the sexual content of Roth’s books, which allows male-dominated Hollywood to indulge its fantasies about virile older men and attractive, acquiescent young women. It was the late critic Christopher Hitchens, musing on the author’s later works, who proposed the unfair but nonetheless amusing hypothesis that Roth continued to write fiction in order to give himself something to masturbate to.

And yet, when filmed, Roth’s novels can be remarkably impotent affairs. There are exceptions, particularly when filmmakers focus on Roth’s smaller, more manageable works, i.e. this year’s “Indignation” and the 1984 American Playhouse adaptation of “The Ghost Writer.” (Don’t quote me on that last one, though — it’s been a while since I’ve seen it and it may not be as good as I recall.)

The best adaptation is “Elegy,” an intimate version of Roth’s novella “The Dying Animal.” Here, the potential ick factor surrounding the story’s May-September romance is significantly reduced by the fact that Professor David Kepesh and his student Consuela Castillo are embodied by the immensely appealing Sir Ben Kingsley and Penelope Cruz acting in a smart script by Nicholas Meyer. It’s also worth noting that the director of “Elegy” is Isabel Coixet, the only woman who has directed a Roth film.

Too often, though, Roth adaptations diminish their source material — what seems plausible on the page can seem ridiculous onscreen. Performed by Nicole Kidman in “The Human Stain,” illiterate janitor Faunia Farley was more credible as an older man’s fantasy than an actual human being. I enjoy Al Pacino’s scenery chomping as much as anybody, but his fling with Greta Gerwig seemed utterly absurd in “The Humbling,” a film that played like a 33 rpm version of “Birdman.” As for “Portnoy’s Complaint” and “Goodbye, Columbus,” both of which starred Richard Benjamin, I confess to having found myself unable to make my way through either film. The half-hour I’ve sampled of each brings to mind lesser 1960’s Neil Simon movies — If I’m missing something, let me know; I’m happy to try again.

Probably the most ambitious and least successful of the lot is “American Pastoral,” which turns Roth’s requiem for the American dream into an unpleasant and clueless soap opera about a father’s vain search to recapture the magic of his past via his daughter who leaves him and never really returns. There are strong performers here: As Nathan Zuckerman, Roth’s alter-ego and narrator, David Strathairn is perfectly cast and, alas, almost perfectly superfluous. Peter Riegert does nice, understated work as the Levov family patriarch. And, Jennifer Connelly does what she can with the role of Swede’s wife Dawn who begins the film as a strong-willed former beauty pageant contest winner and, after a descent into madness following her daughter’s departure, turns into a philandering suburbanite.

But apart from some compelling individual moments and scenes, this “American Pastoral” is a mish-mash of dramatic scenes that never fully coheres. What are we to make of the therapist who blames young Merry Levov’s stuttering on some version of the Electra complex? Or of Merry’s transformations — first from a wide-eyed, innocent child to an f-word-spouting stand-in for the Weathermen’s Bernadine Dohrn, and later to a self-abnegating jain. Or of Merry’s radical cohort who tries to seduce Swede in a hotel room, putting her fingers between her legs then to Swede’s lips and inviting him to see if she “tastes like his daughter.” On the page, all this plays out like a disturbing and riveting manifestation of an all-American nightmare; here, it seems contrived, gratuitous and, above all, rarely convincing.

There’s evidence to suggest that “American Pastoral” may have been harmed by some last-minute editing — Imdb.com lists a running time of 126 minutes for the film and the version I saw on Friday, October 21, the day the film opened, is 18 minutes shorter. Still, though a “director’s cut” might make more sense than the current version, it’s hard to imagine that it would be significantly more engrossing.

During the annual autumn debates about whether or not Philip Roth should finally win the Nobel Prize for literature, it’s tempting to speculate about whether or not the mediocre film versions of his work have undercut the reputations of his novels. After sitting through “American Pastoral” or “The Humbling,” it’s kind of tough to imagine that you’re watching Nobel-caliber work. Nevertheless, I’m sure there will be more Roth adaptations and I’m also sure I’ll be in the audience for those too — personally, I’d like to see a movie of “I Married a Communist” or “The Plot Against America.” But, no matter what book is being adapted, let’s skip the Buffalo Springfield tunes. In fact, I can imagine that some music by America’s most recent Nobel laureate would probably work better on the soundtrack.