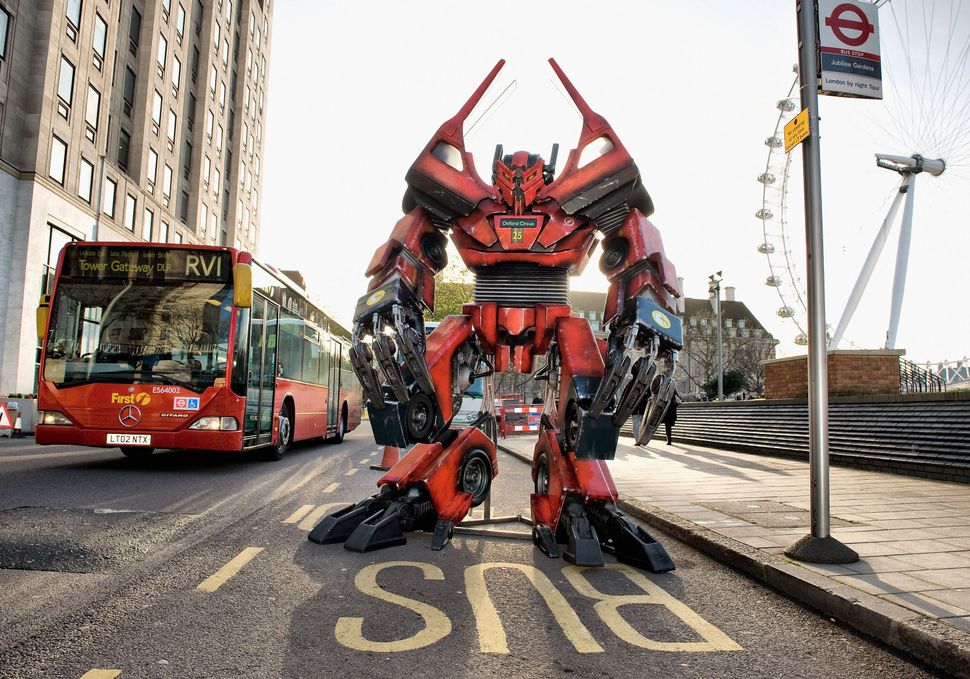 With the release of the fifth installment of the “Transformers” franchise upon us, it seems like an appropriate time to reveal that they are Jewish. The Transformers are giant robots who can change themselves into everyday objects, including cars, airplanes, trucks and tanks. They excel at mimicry, morphing between machine and robot with chameleon-like ease, perfectly and speedily mimicking human-made cars, trucks and the like. They have evolved their machine disguises as a tactic to move unnoticed among humans, and travel around at will.

Hence, Transformers embody the Jewish experience. It has been the struggle of Jews to blend into, and pass, in western Christian society, to be invisible. The Transformers resemble Woody Allen’s curious creation, Zelig, that nondescript chameleonic Jewish character who is discovered for his remarkable ability to transform himself to resemble anyone he is near. Such mimicry, which surely can be described as “undisciplined,” has long been felt to mark the Jewish condition. For Max Horkheimer and Theodor Adorno, “undisciplined mimicry” was “engraved in the living substance of the dominated and passed down by a process of unconscious imitation in infancy from generation to generation, from the down-at-heel Jew to the rich banker.”

The Transformers’ facility at mimicry, their ability to change themselves, taps into other famous Jewish literary examples of transformation, most notably Franz Kafka’s “Metamorphosis.” One morning, an overworked travelling salesman, Gregor Samsa, awakens to find he has inexplicably transformed into some sort of creature, either a beetle or a cockroach. Kafka’s short stories featured many other humans, typically Jews, imagined as having been transformed into animals: apes, jackals, mice

The notion of inanimate objects, or automata, coming to life has its origins in Jewish folklore and mysticism. It has long been the goal of Kabbalah to create a golem — a large, animate, humanoid that ultimately returns to dead matter. The most famous golem was created by the Maharal of Prague, Rabbi Judah Loew (1525–1609).

Since “Transformers,” the initial film in 2007, four other films have been made: “Transformers: Revenge of the Fallen” (2009); “Transformers: Dark of the Moon” (2011); “Transformers: Age of Extinction” (2017); and “Transformers: The Last Knight” (2017). They have all been directed by Michael Bay. As the adopted son of Jim and Harriet Bay, Michael was raised in a Jewish household. Leonard Nimoy was a cousin by marriage. Bay thus joins a long line of Jewish directors of science fiction movies from Fritz Lang’s “Metropolis” (1927) through to Stanley Kubrick’s “2001: A Space Odyssey” (1968).

The franchise is infused with biblical themes, particularly the Exodus from Egypt. The Transformers’ world has been destroyed and they seek to find a new home. Like the Jews, they are wandering, nomadic migrants, settling on Earth where they are treated like outsiders and pariahs, forced to hide in plain sight. According to “Transformers” writer Roberto Orci, the film’s central theme is “being away from home and adapting to a new world.”

Theme of Armageddon, and particularly David vs. Goliath, are present in the films as well as the humans take on the Decepticons. Michael Bay has described the tone of the films as the biblical epic “Ben-Hur fused with Apocalypse Now.”

Their story also resembles that of the modern Exodus story. Like the Zionists, they are divided into two opposing factions. The good Autobots are intent on saving the world and its inhabitants while evil Decepitcons seek to conquer and exploit it. Their conflict focuses on Energon, which is contained in the “All Spark,” a cube that allows for robot reproduction. The Autobots want to use the Cube to rebuild Cybertron, repairing their fractured world (tikkun olam), thus bringing peace to their world, our world, and indeed the Galaxy. By contrast, the Decepticons want to use it to destroy the Autobots, humanity, the Earth, and to dominate the Galaxy. The fight between them resembles the pre-State struggles between the Haganah and the Revisionists.

Optimus Prime is the leader of the heroic Autobots who wage war against the villainous Decepticons led by Megatron. Optimus refuses to kill humans. Like Moses, or his more modern incarnation in Superman, he seeks to lead them to freedom. His trademark motto is “Freedom is the right of all sentient beings.” And when he states, “I am Optimus Prime,” it resembles God’s declaration to Moses in the burning bush. “I am that I am.” In the Family Guy episode, “When You Wish Upon a Weinstein,” it’s even revealed that Optimus Prime is Jewish when he attends a service at the “Temple Beth Thupporting Actor.” Leonard Nimoy voices Sentinel Prime, Optimus’ mentor, the Prime of Dynasty of Primes, the first leader of the Autobots. Tellingly, Prime is the captain of the spaceship known as “the Ark.”

Underpinning the Transformers is HASBRO’s Jewish history. The robots were invented by HASBRO, a company created by three Jewish brothers named Herman, Hillel and Henry Hassenfeld. They founded Hassenfeld Brothers in Providence, Rhode Island. Initially selling textile remnants, they expanded into pencil boxes and school supplies. In the 1940s, they diversified into plastics, producing toys, introducing the Transformers in the 1980s.