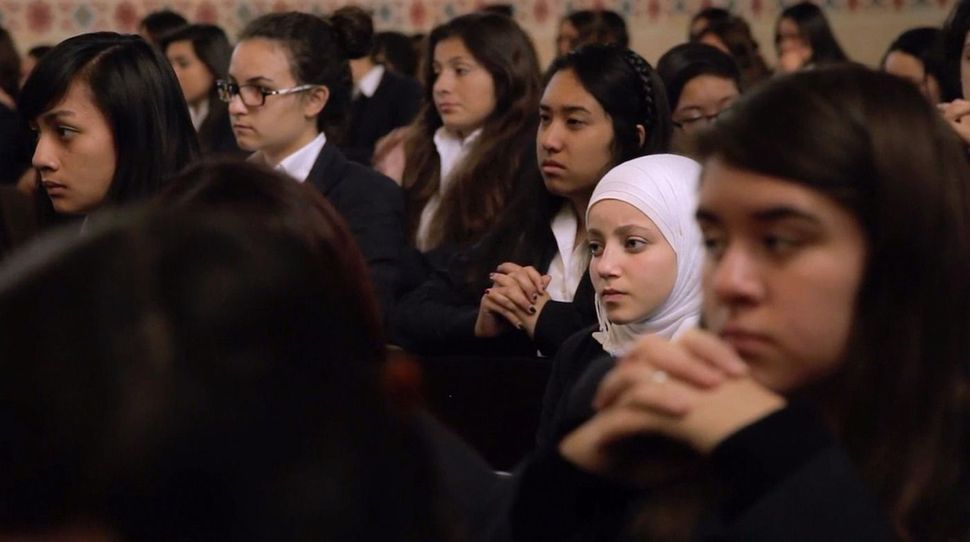 “Dalya’s Other Country,” a film by Julia Meltzer Image by POV

At the very end of “Dalya’s Other Country,” a young woman named Dalya — the documentary’s namesake — attends the January protests at Los Angeles International Airport against the president’s first travel ban. Accompanied by her two brothers and wearing a hijab, she carries a piece of poster board on which she has written in bold letters, “Syrian and Muslim AF.” The image is arresting, not only for what it says about the world in which we find ourselves, but also for how it traces the arc of Dalya’s development. “Dalya turned 18 the day before the election,” said the film’s director, Julia Meltzer, “and I filmed her family on Election Day. It was the most devastating shooting experience of my life.” That’s saying something; Meltzer’s most recent film, “The Light in Her Eyes,” portrayed a religious school for girls in Damascus in the period just prior to the Arab Spring.

What “The Light in Her Eyes” and “Dalya’s Other Country” have in common is a desire to upend our preconceptions, beginning with the perspective of the filmmaker herself. “Ultimately,” Meltzer acknowledged, “being in Syria as a Jewish person, walking into a mosque, I had to confront a question: Why should I make that film? First of all, I had to lie about who I was, because if I ever told anyone I was Jewish, they would assume they knew where I was coming from. I am one small person in this much larger situation, and I cannot change it. But I can change people’s thinking, maybe, even for a tiny moment, if I can tell a story that is open, that lets people see this world and be in it, without judgment” — hence the decision in “Dalya’s Other Country” to avoid the footage of Election Day in favor of a more proactive denouement. “I was so angry,” Meltzer said, referring to the president, “that my film was being taken over, so I decided I wasn’t going to end with him. Then the Muslim ban was announced, and Dalya went to her first protest. And I thought, this is where it has to end.”

The scene of the protest is in keeping with the intentions of the documentary, which is to portray “the perspective of a young Muslim woman right now.” Dalya is a vivid subject, not least because she doesn’t fit any stereotype. She is an immigrant, not a refugee, a middle-class Syrian who left Aleppo with her mother, Rudayna, after the civil war took root there in 2012. Arriving in Southern California at 14, she was sent to a Catholic girl’s school, where she began the arduous process of learning how to navigate two cultures: the devout Islam of her family, and the more secular society to which she had come. “She came of age,” Meltzer said, “in the fully immigrant society of Los Angeles.” As an example, she cites Dalya’s ninth-grade best friend, a Korean-Palestinian girl who introduced her to Korean soap operas and, in one of the film’s early scenes, helped her find a vegetarian option at a Korean fast-food place. It’s another affecting moment, revealing Dalya and her friend for what they are: two high school students testing the bounds of their independence, spending a day at the mall.

Such a sense of daily life may seem unexceptional at first glance, but for Meltzer that’s the conundrum. “For me,” she insisted, “I try to stay away from the idea that the film is going to do something. What it’s doing is sharing a story that’s not being told.” When we think of Syria, we think of conflict, what Meltzer calls “men fighting.” But where are the women’s narratives? “Women are cleaning up, taking care of the children,” she said, “but these stories aren’t told.” Meltzer was referring not only to Dalya or her mother when she said that, but also, in some essential way, to herself. Part of the impulse to make “Dalya’s Other Country” was the birth of the director’s daughter, which limited her ability to travel or to be away from home. “My time was limited,” she said, “for some of the same reasons that Dalya and her mother had been limited, which drew me closer in.” “Dalya’s Other Country,” then, offers at its heart a domestic drama, in which the themes — identity, assimilation, education, advancement — are recognizable not because they are Syrian or American, but rather because they represent human aspiration in the broadest sense.

The notion of looking beneath what may appear, on the surface, like differences to uncover commonalities has long driven Meltzer’s work. Raised in Southern California — in 1930, her great-grandfather, a clock salesman turned department store owner, built the Eastern Columbia Building, downtown Los Angeles’s blue terra-cotta-tiled masterpiece — she spent time in New York in the 1990s working with a group called Creative Time. The group staged installations in unlikely corners of the city as a way of pushing audiences beyond their comfort zones. When she returned to California she began to use billboards to present political text or images, including one by her partner, David Thorne, that read, “I will be happy when the endless war is o….” The idea was to seize, or reinvent, a territory for the public expression of sentiments that, in mainstream culture, anyway, were easy to disregard. “All the projects resonated with wanting to speak and not being able to,” Meltzer recalled, “or not having people hear, and there was something about these messages on a billboard. In Los Angeles, our public spaces are our large boulevards.” A similar intention motivates not only her film work, but also the projects she develops for Clockshop (the name is an homage to her great-grandfather), the artist-run not-for-profit organization she founded in 2004.

Recently, Clockshop produced “Radio Imagination,” a yearlong celebration of the pioneering science fiction writer Octavia Butler, a Pasadena native whose papers are held at the Huntington Library there. “I read,” Meltzer said, “that the Huntington had her archive. And immediately I thought: ‘Who’s going to get to see that archive? It’s the hardest archive to get into in the country.’ So I thought, ‘Okay, how do we open up that space?” The project involved commissioning work from Southern California writers and artists, including poets Frederick Moten and Robin Coste Lewis. The latter’s debut collection, “The Voyage of the Sable Venus,” won a 2015 National Book Award. Programs included installations, conversations and exhibits, all of them intended to showcase Butler’s influence, not only in terms of genre but also in regard to place — looking beneath the surface again, steering us away from preconceptions.

For Meltzer, it all comes back to the unexpected — or, perhaps more accurately, to complexity. Everything is more than we imagine, and every landscape ripe to be explored. This is the definition of engagement, whether we’re watching a film or attending a moonlight reading in a field in the middle of a city, the sort of environment we might not notice otherwise. In that sense, Dalya represents a vivid case in point. “We always teach them the right way and let them choose,” her mother says partway through the film, describing her childrearing strategy. The documentary bears this out, as we watch Dalya go from being a shy and insecure adolescent, new to the United States, to a confident young woman comfortable as both a Muslim and an American. Syrian and Muslim AF, indeed. This is a coming-of-age story, but even more, it is an expression of humanity. “The life, the drama, just unfolded,” Meltzer said, “and I was allowed in.”

David L. Ulin is a 2015 Guggenheim Fellow and the author, most recently, of “Sidewalking: Coming to Terms With Los Angeles” (University of California Press, 2015).

‘Dalya’s Other Country’ premieres on June 26 on PBS.