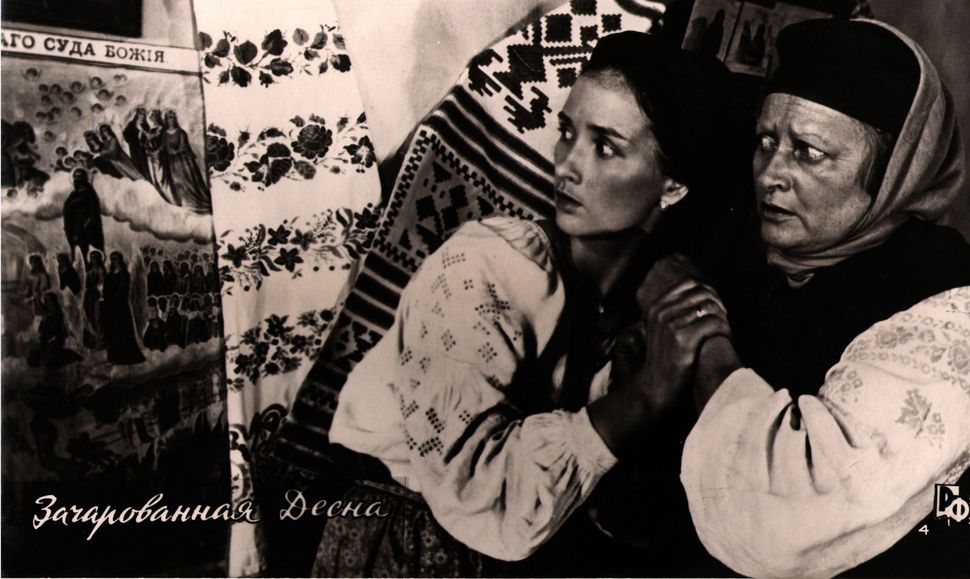 Image by Image courtesy of Gosfilmofond

Before she was a filmmaker, Yuliya Solntseva was the Queen of Mars.

As the title character in the 1924 silent film “Aelita,” she vamps and struts her way around elaborate constructivist sets representing her kingdom on the Red Planet. Decades later, she would take her place in history by directing a trilogy of dazzlingly virtuosic and profoundly earthbound films.

Those films, “Poem of an Inland Sea” (1958), “The Story of the Flaming Years” (1961), and “The Enchanted Desna” (1964) will be given an extraordinarily rare American showing this weekend at Queens’s Museum of the Moving Image. Making the program all the more remarkable is the fact that they will be shown on little-seen film prints flown in from Moscow’s central film archive, Gosfilmofond. “The Story of Flaming Years” and “The Enchanted Desna” will both be shown on 70 mm film.

After acting in such films as “Aelita” and “The Cigarette Girl of Mosselprom” (1924), the Moscow-born Solntseva entered into a relationship and creative partnership with the Ukrainian filmmaker Alexander Dovzhenko, whom she married in 1929. Though not well known in the West, Dovzhenko was a major figure in the halcyon days of the Soviet avant-garde, every bit the equal of his legendary peers Sergei Eisenstein and Dziga Vertov. His trilogy of silent masterworks, “Zvenigora” (1928), “Arsenal” (1928), and “Earth” (1930) are marked by a lyrical sense of natural beauty and an exquisite sensitivity to the rhythms of life.

Solntseva made her final appearance as an actor in Dovzhenko’s 1930 masterpiece “Earth,” on which she was also credited as an assistant director.

Ostensibly a propaganda piece about industrialization and collective agriculture, Dovzhenko’s portrait of a rural village undergoing sudden and transformative change was driven less by its fairly straightforward narrative than by the filmmaker’s personal ideas about film form. Like Eisenstein and Vertov, Dovzhenko had an idiosyncratic theory of film editing, which he drew upon to transform a harvest scene into a visually abstract study of movement itself. The ten or so minutes that make up the film’s climax, which juxtapose birth and death, religious rituals and secular ones, and nature’s rhythms with those of history, are among the most thrilling in all of silent cinema.

Yet the circumstances of the film’s production lend it a pointedly tragic aspect. By the time Dovzhenko and Solntseva were making “Earth,” Stalin was initiating the forced collectivization of Ukrainian agriculture that would decimate the country’s peasantry. In 1932, his regime would confiscate so much of the year’s harvest as to create an artificial famine, killing an estimated 6 to 10 million people, an atrocity known in Ukraine as the “holodomor,” or “death by hunger.” A passionate Ukrainian patriot, Dovzhenko had made a veritable paean to Ukrainian agrarian life while also crafting propaganda for the forces that would work to destroy it.

Such dark ironies, which hover within Dovzhenko’s films, would become plainly visible in Solntseva’s. By the time that Solntseva created her trilogy, the Stalinist era had given way to Nikita Khrushchev’s Thaw, a period of relative openness between Stalin’s rule and that of Leonid Brezhnev. Dovzhenko died in 1956, leaving behind detailed scripts that would become the basis for Solntseva’s trilogy.

“Poem of an Inland Sea,” for instance, is about the construction of the Kakhovka dam, following a group of Soviet citizens who return to their hometown to say goodbye before it’s destroyed to make room for the eponymous “inland sea.”

A mood of ambivalence pervades the film, with a strong sense of melancholy and nostalgia grappling with the dam’s futurist promise. The film’s forcedly upbeat conclusion, in which the starry-eyed villagers take a cruise upon the waters to which their ancestral home has been offered as sacrifice, does little to ameliorate this tension. In contrast to the grand synthesis achieved by the finale of “Earth,” the contradictions of “Poem of an Inland Sea” remain in a state of lingering irresolution.

“Poem of an Inland Sea” is full of fascinating contradictions, but despite some moments of breathtaking filmmaking – a man’s memories flashing before his eyes in for an extended, extratemporal moment – it’s perhaps the weakest of the three films.

Solntseva’s directorial chops are shown to better advantage in “The Story of the Flaming Years.” Like caviar and automatic weaponry, World War II movies were a specialty of the Soviet Union. “The Story of the Flaming Years” is remarkable even by those lofty standards. The most overtly propagandistic film of Solntseva’s trio, its plot concerns the exploits of an chipper, aggressive young Stalinist named Ivan Orlyuk, who, in a series of opportune situations, demonstrates Soviet virtue.

Solntseva is so adept at directing action that she elevates the propagandistic material to something very moving. Tanks swarm the countryside, great crowds of people fight and perish, and the swift-moving camera regards the human drama from a flying plane. The mark of a great action director is the ability to imbue speed and strife with genuine emotion, and not for one second does Solntseva’s camera lose a personal connection to the subject matter. The action, however thrilling, is palpably an existential threat to a way of life, and life itself.

The best of the three films is “The Enchanted Desna,” the last as well as the least political. Inspired by Dovzhenko’s upbringing in a village on the Desna River in Northeast Ukraine, its vivid evocation of the natural landscape makes it feel almost like a companion piece to “Earth.” Told from the perspective of a writer, also named Alexander, taking refuge from battle during the War, the film moves associatively through his memories.

Few, if any, films have better represented the distorted perspective of childhood, when one’s immediate surroundings appear no less expansive and rich than the entire universe. As Solntseva’s unmoored camera follows the young Alexander through a patch of sunflowers, Dovzhenko’s little hometown on the Desna really does seem to extend indefinitely. It’s a place where horses casually speak in the ironical voices of haggard old men, and where the autumn harvest is carried out in a rainy action sequence that for a brief moment rivals the tempestuous heights of Kurosawa’s 1954 “Seven Samurai.”

“The Enchanted Desna” threatens to conclude on a markedly state-friendly note, with the grown Alexander displaying his admiration for the construction of a grim-looking factory. Then a lyrical montage suddenly ushers in a very different emotional register, immersing us in the flow of memory for one last time. We understand that the film’s loyalties ultimately lie with nature, childhood, and the light of the sun playing upon the river’s surface.