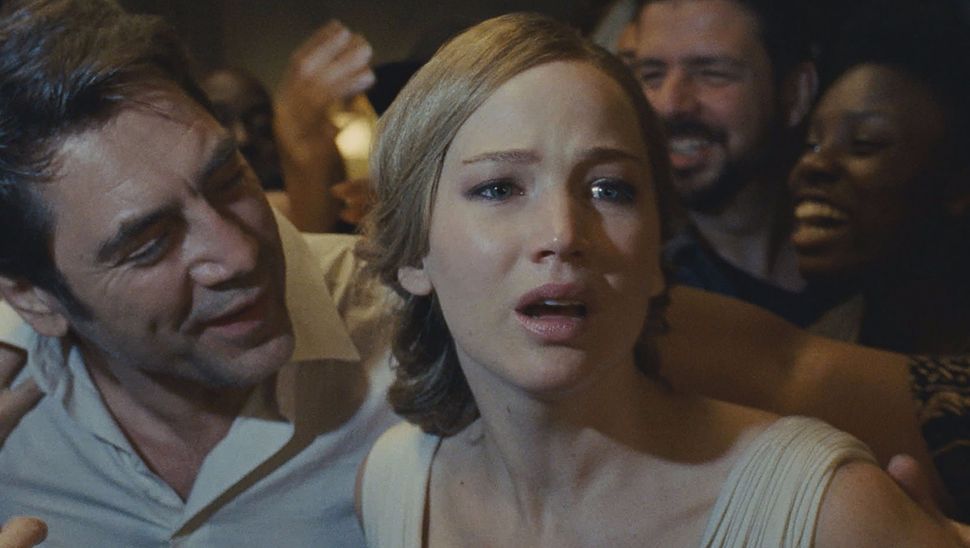 I chose to see Darren Aronofsky’s latest film, “mother!” without reading anything about it. All I could infer from its posters was that it would be scary, and all I could tell from Facebook was that my friends had strong opinions about it.

Little did I know that I’d be watching two hours of mystical allegory, narrating the ancient pagan-Kabbalistic myth of the Divine Feminine in the terms of a domestic thriller.

Apparently, my surprise wasn’t unique; the film’s distributors advertised “mother!” as a kind of horror film, and audiences have been pissed off — justifiably so, since not only is “mother!” not a conventional horror film, it’s not a conventional film at all. Its action is non-literal; it’s not really about a couple renovating their home in the country; it’s not really happening at all.

As someone who’s studied kabbalah and literature for almost three decades, that was no big deal. I understood fairly early on that we were in symbolic, non-literal territory. That house in the country has no walkway, no driveway, no mailbox, and no street. Early on in the film, Lawrence’s character is seen gazing out the doorway at endless, empty meadows. If you’re paying attention, you realize in the first reel that either her character is an unreliable narrator (perhaps mentally ill) or that Aronofsky is, and the action of the film is not really “happening” in the conventional sense.

Turns out, the latter is the case. As I subsequently read, Aronofsky intends “mother!” to be a parable touching on radical environmentalism (mother as in Mother Earth, the sentient Gaia being systematically destroyed by humankind) and Jewish and Christian myths of the sacred feminine. So let’s walk through the film on those terms — the results are quite remarkable.

Lawrence’s character – named in the credits as Her – is a blend of the Shechinah, the Virgin Mary, Mother Earth, and the universal “feminine” principle of nurturing, incubating, caring, and giving. (I scarequote ‘feminine’ here because all of these gendered myths can be essentialist and oppressive. Women are not necessarily ‘feminine’ in this sense; nor are men ‘masculine.’ These are categories that are at once symbolically fruitful and politically perilous.)

As the film begins, it appears that Her is painstakingly renovating the ruined familial home of Him, a poet played by Javier Bardem. All is well, for a few minutes, though Bardem is suffering from writer’s block. Lawrence chops vegetables and frets over Bardem’s emotional health.

Then the weirdness begins. First an obtrusive, vulgar couple — identified in the credits as Man and Woman — appears and makes a series of increasingly awful messes in the house. Then their feuding children show up, with one killing the other in a brutal act of jealousy.

Should I say “spoiler alert”? Or have you noticed that Man and Woman are Adam and Eve, and their kids are Cain and Abel? (Yes, Cain even receives the ‘mark of Cain’ on his forehead before running out into the wilderness.) At the Brooklyn Academy of Music, where I saw the film, this is when people started wondering what the hell was going on. Did that just happen?

Meanwhile, Bardem’s character continues to care for Man and Woman (played by Ed Harris and Michelle Pfeiffer), even though they have completely wrecked the domestic tranquility in the Garden of Eden. True to her archetype, Pfeiffer breaks into the forbidden inner garden and destroys the forbidden fruit — a kind of crystal that we’ll learn more about later. And then dozens of people arrive for Abel’s funeral party, drinking and carousing until finally they cause a flood (by breaking a sink that Her hadn’t finished installing) that washes them all away.

Him’s motives are the hardest to discern. Why does he care so much for these despicable humans who only despoil and destroy the world that Her has been lovingly restoring?

After the Deluge, the motive becomes clearer: humanity’s drama gives him inspiration. His writer’s block ends; he writes endlessly; his work is brilliant. And Him and Her make love — perhaps for the first time, it is suggested — and Her becomes pregnant. All seems well, and quiet, again.

But it isn’t. The motives of the Male God (I’ll start calling Him that, since that’s who he is: Yahweh, the Sky God, the masculine principle; the Holy One, in the language of theosophical Kabbalah) continue to be utterly selfish. He publishes his book — once again, the time-bending aspect of “mother!” reveals its symbolic status — and it is immediately beloved. Hordes of wild, adoring fans begin to swarm the house. God does not turn them away; he says that he cares for them, but it’s clear that he actually cares for their adulation. The Shechinah/Mary/Goddess is distraught.

In the film’s final reel, the religious symbolism of “mother!” at last becomes explicit. Bardem’s fans create cults of worship. They fight wars between them. The house is utterly destroyed by humankind’s rage and zeal. Lawrence’s baby son is born, and as soon as he can, Bardem snatches him to show him to the maniacal crowds, who venerate him as the Son of God, which of course he is. The baby is soon murdered, and his flesh devoured by the mob, in a parodic communion ritual that would horrify the Catholic conservatives who protested Aronofsky’s last film “Noah,” if they only realized what was going on.

Finally, Her has had enough. Her world devastated, her child killed and then worshipped as a god, she destroys the house by blowing up the boiler in the basement. And then comes Aronofsky’s final twist. The world is destroyed, but Him survives intact – and he demands one final thing from Her: her love, reified into the crystal that we saw at the beginning. The film is set to repeat itself, the world an endless succession of universes lovingly created by the love of the Divine Feminine, repeatedly destroyed by the Masculine.

Moreover, the love that generates the world is encased in an imperfect vessel, as Lurianic Kabbalah holds. Its spark is contained in a vessel that will inevitably shatter, bringing evil into the world. When Woman ate of the forbidden fruit, it wasn’t an apple or a fig – it was the kli, the vessel of the Divine Light itself. And she shattered it.

Darren Aronofsky has thus retold the gnostic myth of the kosmos, with God as Satan. It is not God who creates or maintains the world: it is the Goddess; Her; Isis; Astarte; Asherah. The Male God is the False God, as Gnosticism (and perhaps some echoes of it in Kabbalah) insists. He is the usurper of the power of the true Deity, the Feminine, the Goddess, and while she gives and nourishes, he lives only for himself.
Moreover, this cycle repeats again and again and again. In the last frame of the film, a different actress portrays Her, but with the same purity and innocence, the same generosity, about to be exploited.

It’s a good thing most people don’t know what’s going on in the film. If they did, they’d try to burn it.