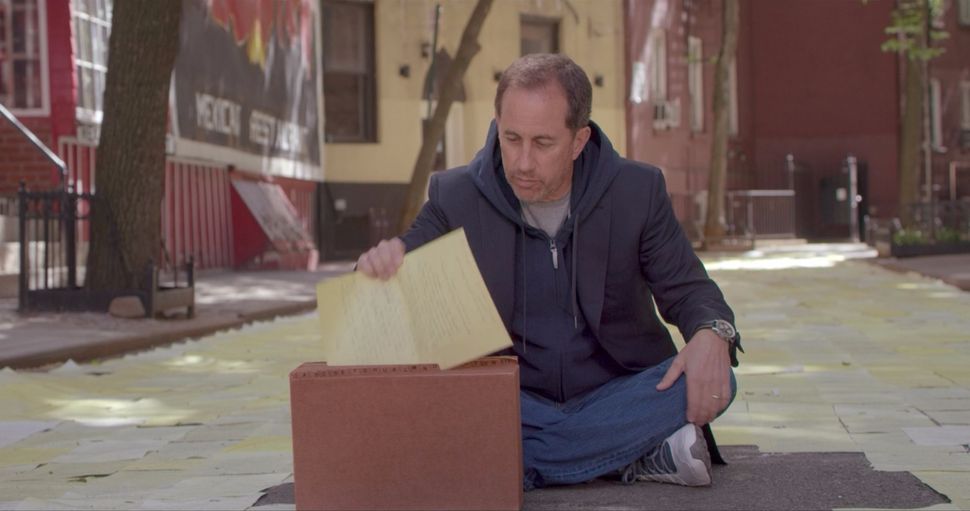 Jerry Before Seinfeld Image by NetFlix

There’s a scene toward the end of Jerry Seinfeld’s new Netflix special “Jerry Before Seinfeld” where the man himself is sitting cross-legged in the middle of a street just behind a single accordion folder. The road surface is paved with notepad paper taken from that folder in which he stored every single stand up joke that he had written once it had been successfully performed.

The shot is a testament to Seinfeld’s meticulous, even obsessive, attention to comedic detail. Failed jokes were discarded or rewritten.

However careless a standup seems, every line, every delivery is the endpoint of a process through which experience is shaped and linguistically honed to maximum effect. That’s worth bearing in mind — especially in a show about the person behind the show that re-shaped American television comedy — because this Netflix show is, itself, weightless, innocuous to the point of pointlessness.

Why this show? Why now? Because after all the other easily produced standup shows on Netflix this was the obvious next step?

What was incredible about the standup wave of the late 1970s and early 1980s (comedians like Robin Williams, Steven Wright or Eddie Murphy) — is that they made shows from “nothing.” And, when the sitcom “Seinfeld” arrived it lampooned itself as a “show about nothing.”

Of course the show was actually deeply about the lived experiences and intertwined stories of mostly Jewish characters on the Upper West Side of Manhattan. The fact that a bunch of lightly Jewish characters in one of the most Jewish areas of the country was so “nothing” yet so “universal” that it could be the most successful show on national television was a marker of the excellence of its writers and performers and of the state of American culture.

But the trouble with “nothing” — even a joke about “nothing” — is that it might not matter.

The bread and butter of Seinfeld’s comedy is observational. Not Louis CK confessional (or Tig Notaro investigative), not Jon Stewart political, not Aziz Ansari identity-based. That makes Seinfeld the standup comedian timeless. Listening to the PG-rated show, my 8-year-old daughter who has never heard of Seinfeld described the performer as an “excellent comedian.” And he is. But while Jerry and his cohort blazed a trail for those innovative comedians who are passionate and compelling, “Before Seinfeld” is little more than an innocuous standup set mixed in with a few innocuous reminiscences from celebrity Jerry.

It’s not clear whether the material Seinfeld is performing at the live Comic Strip show (the core of this special) is material that worked when he played that venue 40 years ago. The topics he works could conceivably be new or old: like kids at home improvement stores, young adults in their first apartments and “Why did Democrats choose a donkey and Republicans an elephant?” It’s only the last one where he touches on topicality and the current White House and the absurd narcissism of anyone — not just Trump — thinking they should be president — “It’s like thinking I should be Thor!”

It’s not Seinfeld’s fault that he considers his childhood to have been pleasantly uneventful. It’s not his fault that by 1980 Jewishness was so unremarkable that it didn’t stop him or his show from succeeding beyond his wildest dreams. And it’s certainly not his fault if people look at “Curb Your Enthusiasm” and think that Larry David was the genius of “Seinfeld.” But what is his fault is that he’s made a Netflix show that is barely on a par with the fawning celebrity homes show “Cribs.” It’s entirely competent, but entirely uninteresting.

Compare this coming of age show with, say, Hasan Minhaj’s passionate, tragicomic “Homecoming King” — also a Netflix standup show — and it’s difficult to care about “Before Seinfeld.” Seinfeld claims that his first words were “leave me alone,” and, on the evidence of this show it’s easy enough to do as he says.