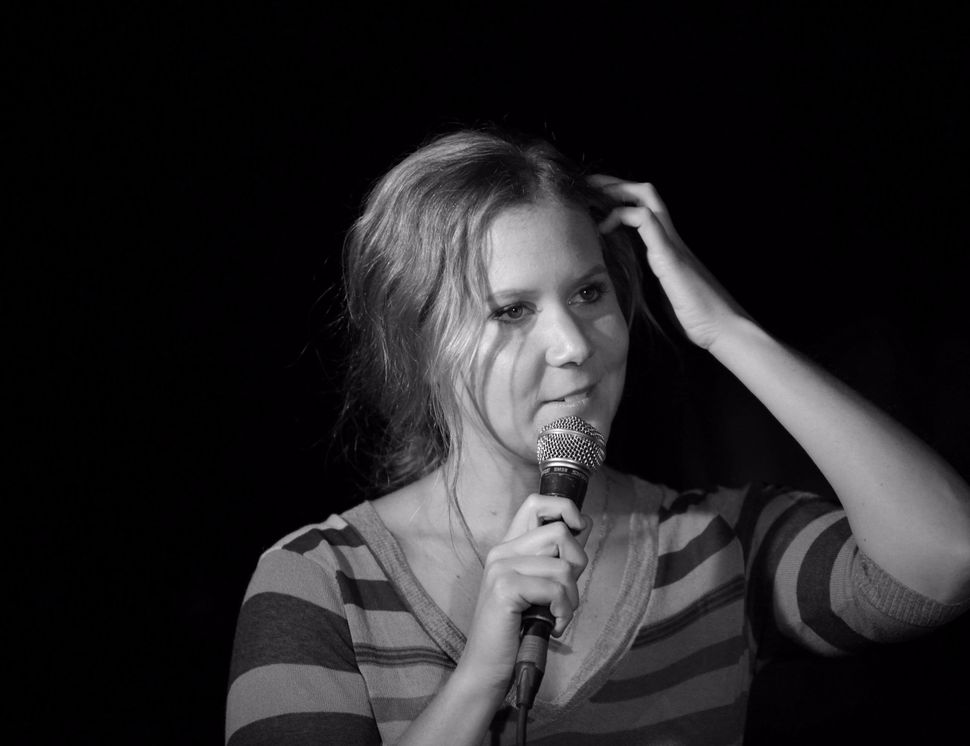 Jews are hilarious. We know this, or at least think we do. Just look at all the Jewish cut-ups out there. At the moment, Judd Apatow, Jenji Kohan, Amy Schumer and Sarah Silverman are some of the top performers and writers on the contemporary American scene. The out-sized achievements of comic Jews have spawned a decades-long search to explain our success.

Recently, we’ve had “No Joke: Making Jewish Humor” (2013), “God Laughed: Sources of Jewish Humor” (2014), and “Kvetching and Shpritzing: Jewish Humor in American Popular Culture” (2015). A special issue of a scholarly journal appeared under the title “A Club of Their Own: Jewish Humorists and the Contemporary World” (2016). I warn you, it’s not very funny.

Then there are the cinematic elegies to American Jewish humor, “When Jews Were Funny” (2013) and “When Comedy Went to School” (2013). Now, Columbia University professor Jeremy Dauber follows up on his award-winning 2013 biography, “The Worlds of Sholem Aleichem,” with his own attempt to tell the story of Jewish humor. Soon we’ll need a book or a film (or at least this review) to explain the appearance of all these books and films.

Dauber examines how Jews in different places and eras have responded with humor to a variety of experiences, including anti-Semitism, assimilation and life in the Diaspora. His chapters are all variations on themes, or, as he calls them, “conceptual rubrics.” That phrase is one of the few intrusions of academese into a work that manages to be both erudite and breezy in its handling of history.

Short excursions into Jewish history are leavened by his retelling of numerous jokes throughout. And Dauber can be downright funny himself. At one point he characterizes Philip Roth’s “Operation Shylock” as “John le Carré if everybody involved had gone to… City College rather than Oxbridge.” Dauber deftly summarizes issues that would threaten to bog down a less capable writer. Rabbinic debates, medieval poetics and Nazi jurisprudence all receive economical treatment that provides context without overwhelming the reader. I teach a course on American humor, yet Dauber’s breadth left me breathless and his depth left me in his debt.

Each chapter opens with an extended discussion of the use of humor in The Book of Esther before soaring — at times dizzily — through the next two millennia or so. Dauber continually deepens the reader’s engagement with the biblical Jewish comedy of errors, while also demonstrating connections between recent comedy and ancient wellsprings of humor. The narrative form of “Jewish Comedy” is unusually complicated for a general audience book, but it has the benefit of conveying a version of the traditional Jewish sense of circular time. As its full title promises, this is a profoundly Jewish and serious — though never stiff — work.

Dauber’s final and perhaps best chapter, “Jewish Comedy — Hold the Jewishness,” opens with a discussion of how Esther “spends much of the book that bears her name in disguise.” He suggests that this concealment ultimately reveals the impossibility of “attempts to define and isolate the nature of Jewish identity.” From this rather metaphysical speculation on Jewish essence, Dauber winds his way through an earthy discussion of Renaissance-era Hebrew farce, a Yiddish chivalric tale, Sholem Aleichem’s “On Account of a Hat” — which he calls the “greatest Jewish short story ever written” — and on to Franz Kafka’s absurdist humor of horror. Dauber even manages to compare Gregor Samsa’s embarrassment at his metamorphosis to the excruciating sight of Ben Stiller’s genitalia stuck in a zipper in “There’s Something About Mary.” And that’s only half the chapter.

I especially appreciate Dauber’s audacity at comparing Kafka to gross-out humor. I like to point out to my own students the simian parallels between Kafka’s famed short story, “A Report to an Academy,” and a favorite episode of “The Phil Silvers Show,” called “The Court Martial” and starring Zippy the chimp. Here are Kafka and slapstick again. But incongruity, as any humor scholar knows, is a necessary condition for humor.

Dauber reads (and watches) widely and well, and is willing to go against the grain of academic decorum in order to challenge received wisdom. Even the footnotes to “Jewish Comedy” surprise: The Jewish co-writer of “Annie Hall” came up with the Swedish Chef for the Muppets? Will Rogers learned Yiddish? Tom Lehrer might have invented the Jell-O shot?

Yet despite my genuine admiration, the book fails to ask, let alone answer, a question that should be at the heart of any discussion of the topic by an American scholar steeped in literature and culture. What is it about Jewish humor — however broadly we define it, and Dauber defines it extremely broadly — that has made it so popular in the overwhelmingly Christian United States? How is it that “Portnoy’s Complaint” plays in Peoria, Illinois? I think the answer has to do with the fortuitous coincidence between the central character-type of American humor in the late 19th century — the bumbling, put-upon, luckless “little man” — and the dominant character-types of Yiddish folk and literary humor at the time: the schlemiel, the schlimazel and the luftmensch. Simply put: Jewish humor and American humor intermarried about 120 years ago. But where Dauber sees the persistence of Jewish humor across the subsequent generations, I see an indifference to Jewish particularity.

If Dauber is the Hillel of humor, I hold by humor’s (non-Jewish) Shammai, the late British scholar Christie Davies. Decades ago, Davies conducted a content analysis of jokes and concluded that there remains little identifiably Jewish about Jewish humor, except the threat or fear of no longer being identifiably Jewish due to apostasy, assimilation or masquerade. In other words, Jewish humor is just like every other kind of humor, except for its obsessive concern over Jews disappearing. And if that’s the case, this explains the recent appearance of all those books and films by scholars and documentarians who explain the phenomenon of Jewish humor. They work against the growing shadow of a vanishing tradition of identifiably Jewish humor.

Adam Rovner is an associate professor of English and Jewish literature at the University of Denver and is the author of “In the Shadow of Zion: Promised Lands Before Israel” (NYU Press, 2014).