‘The Shape Of Water’ Is A Biblical Meditation On Transcendent Love 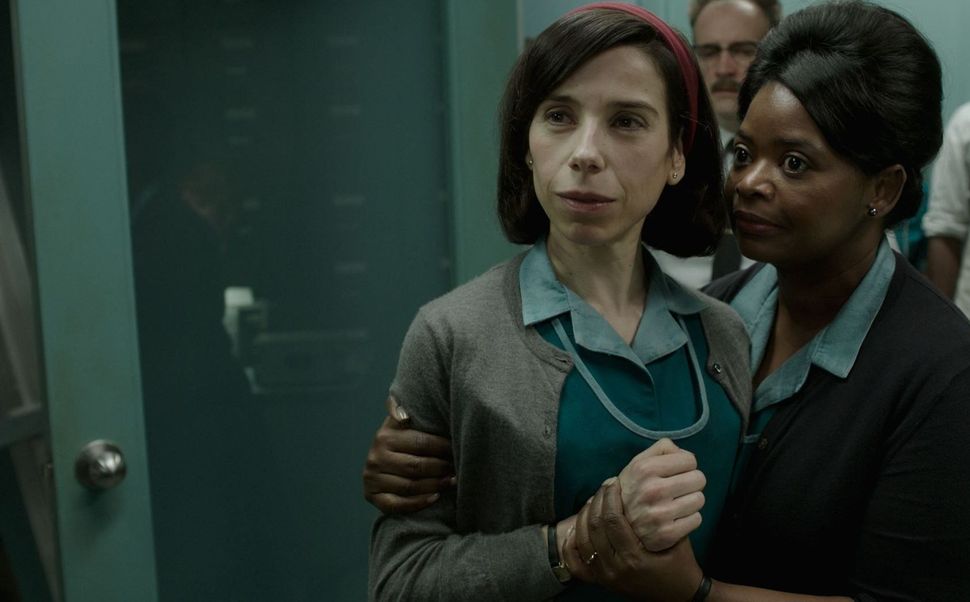 There’s an old joke: Two fish are swimming around in a fishbowl when one asks, “How’s the water?”

“What the hell is water?” the other fish responds.

In “The Shape Of Water,” Guillermo del Toro’s newest tour de force film, the lonely, mute Elisa (Sally Hawkins) is miserably acclimated to her everyday, mundane routine — until she meets a mysterious water-dwelling creature from the Amazon who seems to understand her, and happens to be a government secret. To the government officials who keep the creature captive, performing brutal experiments on it may be the key to winning the Cold War. Yet Elisa, who falls love with the creature, realizes she must rescue it.

In Judaism, water is a symbol of life. It can cleanse, as when someone immerses themself in the mikveh, and it can destroy, as in the Torah’s great, exterminating flood. “Water is like love, it has no shape. It takes the shape of whatever it inhabits,” said del Toro in an interview with Salt Lake City’s KUTV “It’s the most powerful element in the universe. It’s gentle, flexible, but breaks through every barrier.”

The government employees who study the creature mention that he may or may not be a river god worshipped by South Americans. He has the power to cause Elisa’s friend, the insecure, balding Giles, to grow hair again; he also possesses healing powers, with which he cures a scratch he gives Giles in a moment of distress. All of these powers are diminished when the creature is not near the water in which he needs to live. It the creature’s manifestation of the power of water that allows him these extraordinary capabilities.

For Elisa and Giles, as lonely outsiders, acquaintance with this creature serves as an awakening to their loneliness. Elisa, who is mute, signs to Giles that when the creature looks at her “he does not know how I am incomplete.” Giles, a homosexual living at a time in which he is required to be closeted, feels he was either born too early or too late. “Have you always been alone?” Giles asks the creature, as they both sit in Elisa’s bathroom. Elisa’s African American coworker Zelda, subject to rapidly escalating racist comments from the people around her, often complains about her husband, who doesn’t respond to her: He sees her, but not really.

As Alissa Wilkinson points out in her review in Vox, “The Shape of Water” references the biblical Book of Ruth. In a blink-or-you’ll-miss-it moment at the opening of the movie, the camera shows a marquee advertising “The Story Of Ruth” at the Orpheum theater below Elisa’s apartment. In the biblical story, the Moabite Ruth begs her Jewish mother-in-law Naomi to let her come to Israel with her. “Do not urge me to leave you or to return from following you. For where you go I will go, and where you lodge I will lodge,” she says.

A similar scene occurs towards the climax of ”The Shape of Water.” Elisa, having rescued the creature from his captors, signs to him that he must leave. He signs to her back to her that she must come with him. While Elisa rejects her lover’s request and Naomi accepts Ruth’s, the two stories are bonded by the concept of a love so all-encompassing that it changes those who experience it.

Ruth’s love for Naomi transcends her ethnicity, while Elisa’s love for the creature both transcends her humanity and renders her more intensely human than ever. Like water adopting the shape of the vessel that contains it, intense emotion fundamentally changes the way each woman understands herself.

In Genesis 1, all creation emerges from the tehom, or “primordial deep.“ In “The Shape Of Water,” del Toro frames water as an elemental, powerful force which is the catalyst for every event in the movie.

At a key moment in “The Shape of Water,” the film’s villain, Mr. Strickland, discusses the creature he is holding captive with a colleague. “You may think that thing looks human,” he says. “It stands on two legs, right? But we’re created in the Lord’s image. You don’t think that’s what the Lord looks like, do you?” Strickland underestimates the power of water, and more importantly, that of people who do not match his concept of the ideal form. “The Lord,” in his imagination, is obviously neither mute nor black — nor, likely, a woman. As “The Shape Of Water” shows, Strickland is on the wrong side of history.

Water takes any shape, and as the book of Ruth long ago made clear, so can love.

‘The Shape Of Water’ Is A Biblical Meditation On Transcendent Love