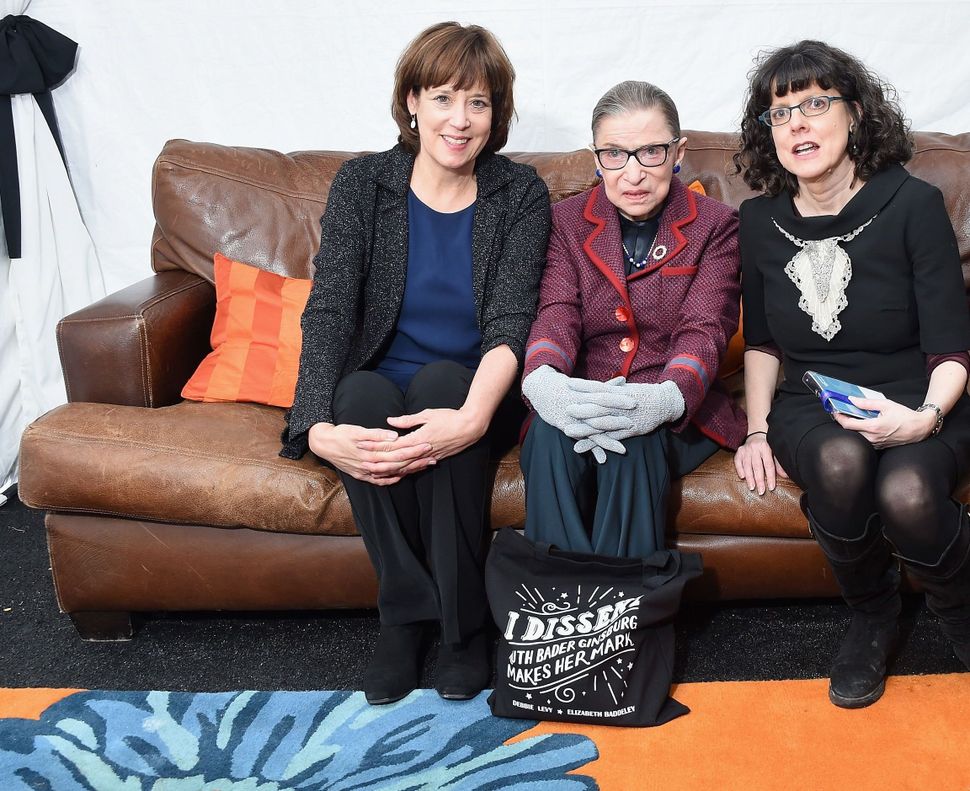 The documentary “RBG,” a chronicle of the life and career of the United States’ most pop culture-prominent Supreme Court Justice, appears to have made a decisive impact at this year’s Sundance Film Festival. Ruth Bader Ginsburg, speaking with NPR’s Nina Totenberg after the film’s premiere, presented opinions on Kate McKinnon and the #MeToo movement; as Magnolia Pictures and Participant Media have bought the film’s distribution rights, mainstream audiences might soon have an opportunity to judge the movie’s merits.

Yet there’s no dearth of existing Ginsburg documentary appearances for acolytes to sample while they wait for a behind-the-scenes look at her professional rise, marriage, experiences with sexism and time both on the Supreme Court and arguing cases in front of it.

First, of course, RBG-lovers can tune in to next week’s live-stream of Forward editor-in-chief Jane Eisner’s interview with Ginsburg at Washington D.C.’s Adas Israel synagogue. (Yes, we know that’s not a prior documentary appearance; still, it’s very cool.) But if even next Thursday is too far away, watch the following films for a sense of what Ginsburg is like on and off the bench.

Ginsburg is already glorious, but she becomes even more so with the revelation that she is a passionate fan of Russ & Daughters. In the 2014 documentary “The Sturgeon Queens,” made to coincide with the 100th anniversary of the founding of the iconic Lower East Side smoked fish emporium, Ginsburg expounds on what the legendary establishment means to her. “Even before I heard the word ‘feminist’ it made me happy,” she says of the founder’s then-untraditional decision to name the restaurant after himself and his daughters.

The 2008 PBS miniseries “The Jewish Americans” features a number of Jewish luminaries discussing the history of Jews in the United States, among them Ginsburg, Tony Kushner, Carl Reiner and the Forward’s own editor-at-large — then editor-in-chief — J.J. Goldberg. In one clip, Ginsburg discusses the particular promise that Jews saw in the U.S.: “For Jews, the Constitution was important because the Founding Fathers thought about protecting freedom of religion, the right to worship one’s God in one’s own way, and then second, that we were to have no official religion in the United States,” she says.

MAKERS, which launched in 2012, is an ongoing project focused on female storytelling. Ginsburg has been a popular MAKERS subject. “She was 14 months old when I started; I mean every day at 4 o’clock my time at the law school was over and it was children’s time. Each was a respite from the other.”

The 2010 Supreme Court case “Citizens United v. FEC” fundamentally changed American politics, lifting previous restrictions on the political campaign-related activities of corporations. Ginsburg, who dissented to the 5-4 decision, has been outspoken about its repercussions: In 2014, she told The New Republic that it was the one decision of the contemporary court that she “would overrule.” She appears in the 2014 documentary “Citizen Koch,” which examine the impact of the “Citizens United” ruling on the political power of billionaire donors like siblings Charles and David Koch. (Spoiler: It made them extremely powerful.) Filmmakers Carl Deal and Tia Lessin appear to agree with Ginsburg: When placed at the heart of American politics, money risks rotting the whole thing.

Correction, January 24, 5:39 pm: A previous version of this article referred to one of the parties with distribution rights to “RBG” as Participant Media Mainstream. That organization’s name is in fact Participant Media.