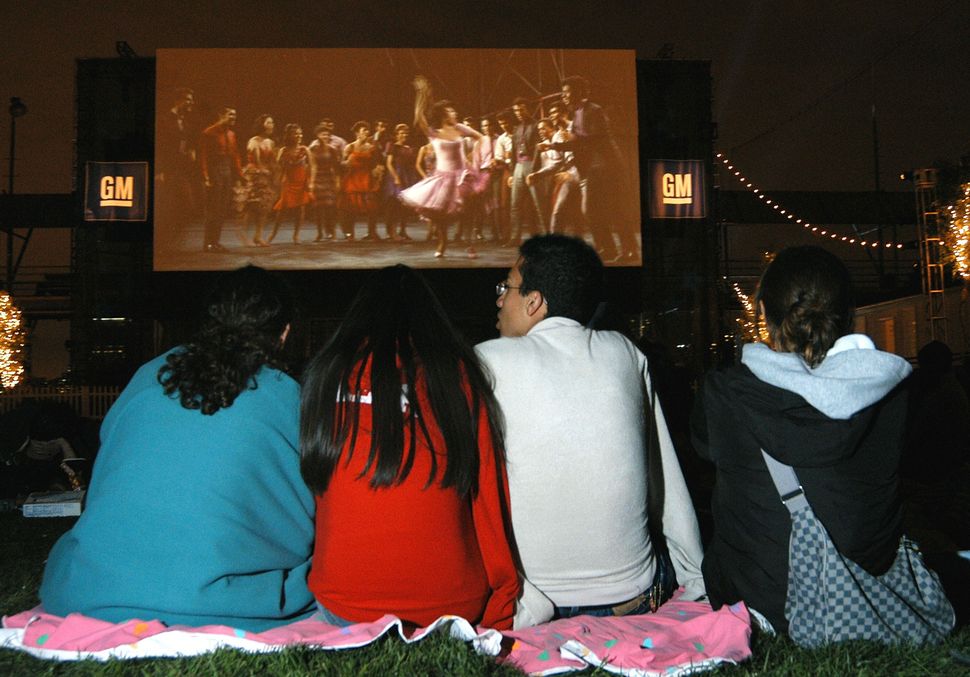 Few American musicals have won more sustained audience devotion than “West Side Story,” the 1957 brainchild of an all-Jewish creative team. Playwright Arthur Laurents, choreographer Jerome Robbins, composer Leonard Bernstein, and lyricist Stephen Sondheim, collaborated, despite sustained tensions, to produce a musical that has been staged around the world for six decades and inspired an Oscar-winning movie in 1961. Performance historians Elizabeth Wells and Julia Foulkes have described “West Side Story” as an American cultural landmark. Now an open casting call has been announced for a film remake of “West Side Story” to be directed by Steven Spielberg with screenplay by Tony Kushner. Should fans be plotzing?

The original movie co-directed by Robert Wise and Robbins, was a hit, even if some observers were disquieted when the dancer George Chakiris, as Bernardo, the leader of the Sharks gang, inexplicably won the Oscar for Best Supporting Actor over Montgomery Clift’s heartbreaking turn as a Holocaust victim in “Judgment at Nuremberg.”. Still, causes for disquiet about the announced remake are many.

For one, Spielberg has never directed a musical. Kushner has written a musical, “Caroline, or Change” which bowed on Broadway in 2004. Yet his writing has been known to veer into weighty verbosity, especially in the 2012 Spielberg-Kushner film “Lincoln,” and comic relief is a key element in “West Side Story.” Worried aficionados have been parsing Spielberg’s casting call like a Talmudic text for further details:

The current trend of casting filmstars with scant singing and dancing skills in musicals such as “La La Land,” “Les Misérables,” and “Sweeney Todd,” is being reversed. The singing voices of the leads in the Robert Wise film were dubbed by professional musicians, and Rita Moreno has recounted how only a last-minute crash course in dancing made the choreographic part of her role as Anita possible. Like many Bernstein stage musicals, “West Side” is exceedingly difficult to perform. The composer himself later tried to solve the challenge of finding actors who could sing all the notes by casting opera stars in a recording. The grotesque results are visible in a sometimes cringeworthy documentary. The Spanish tenor José Carreras performed the part of Tony, a young man of Polish ancestry, with a heavy accent not redolent of kielbasa. New Zealander Kiri Te Kanawa gingerly handled the soprano role of Maria, of Puerto Rican ancestry. Spielberg sensibly plans to cast actors who are Hispanic in the roles of New Yorkers of Puerto Rican origin. Chakiris, of Greek ancestry, lacked authenticity, whereas Moreno has recounted how her skin was darkened by the film’s makeup department, supposedly to make her more identifiable as Hispanic.

And what of the landmark choreography by Jerome Robbins, who launched the original “West Side” project back in 1947? The musicologist Nigel Simeone explains that Robbins proposed to his friends to create a musical about feuding Jewish and Irish Catholic families on New York’s Lower East Side. After much effort, the team finally realized that the ground had already been covered by the trite, but vastly popular, stage comedy “Abie’s Irish Rose,” in the 1920s. Years later, Robbins’ brainchild was revisited with Hispanic gangs facing off against those of European origin in New York. The sight of tough youths pirouetting onscreen with athletic leaps and turns in Robbins’ trademark dances impressed audiences. Yet Robbins was derided by the critic Pauline Kael, who termed the Robbins choreography to be “simpering, sickly romantic ballet.” Robbins himself (born Rabinowitz) was a divided spirit, torn between popular dance and classical ballet; he also worked with left-wing associates despite having informed on friends during the McCarthy era, naming names before the House Committee on Un-American Activities to save his own career.

If Spielberg is seeking a gifted choreographer to rethink dated aspects of Robbins’ work, Andy Blankenbuehler, who showed a fine grasp of Robbins-influenced stage moves and urban trendiness in “Hamilton” and “In the Heights,” would be an ideal choice. Far more displaced in the forthcoming film than Robbins will be Laurents, as rewritten by Kushner. In an interview in 2009 Laurents (born Levine) testily complained while preparing a Broadway revival of “West Side” that he was all for updating aspects of the show:

“It was Steve [Sondheim] and the Bernstein kids who wanted every note and every vamp and every word untouched,” [Laurents] says. “…The Bernstein estate was the worst. They’d say things like ‘Bars 75 through 81a have been omitted, and we want them back.’… They’re just pedants. Archivists.”

Still, although Spielberg is inexperienced when it comes to directing musicals, no one has claimed that the director himself is unmusical. Film historian Nigel Morris points to Spielberg’s decades-long collaboration with the composer John Williams on soundtracks that provided “operatic accompaniment” to the Indiana Jones series and “Jaws,” as well as more restrained folkloric sounds in “Schindler’s List.” As a producer, Spielberg helped develop “An American Tail”, a 1986 American animated musical film about Fievel Mousekewitz and his family, Ukrainian Jewish emigrants. Spielberg originally conceived “American Tail” as a musical in the Disney tradition.

As director, Spielberg has helmed musical numbers in 1941 about the effect of the Pearl Harbor attacks on Los Angeles, and “Indiana Jones and the Temple of Doom.” (1984) In 2015, Spielberg claimed that shooting the scene of a jitterbug dance contest in “1941” was the “most satisfying experience for me… I always saw 1941 as an old fashioned Hollywood musical and had fantasized with John Williams about doing eight musical song and dance numbers as well. But I didn’t have the courage at that time in my life to tackle a musical… I always regret not making 1941 a real old fashion, golden era musical.”

“Indiana Jones and the Temple of Doom” was planned to open with what Spielberg called a “Busby Berkeley dance number,” according to authors J.W. Rinzler and Laurent Bouzereau. That “Indiana Jones and the Temple of Doom” also was one of the most somber stories in the franchise may have prepared Spielberg for “West Side,” where tragic events are interlarded with manic dances. Some Spielberg movies were seen as containing innate lyricism, inspiring stage musicals such as “The Color Purple” and “Catch Me if You Can.” Possibly for this reason, Spielberg’s name was once mentioned as a candidate to direct a screen adaptation of Andrew Lloyd Webber’s musical “Cats.” In interviews dating back to the 1970s, Spielberg has expressed the wish to direct musicals on film or Broadway. In 1997 he confessed to journalist Peter Biskind that he still had a “mad chocolate craving to direct a conventional musical.” While the creators of “West Side Story” would have balked at the adjective “conventional,” it appears as if Spielberg’s sweet tooth will finally be satisfied.