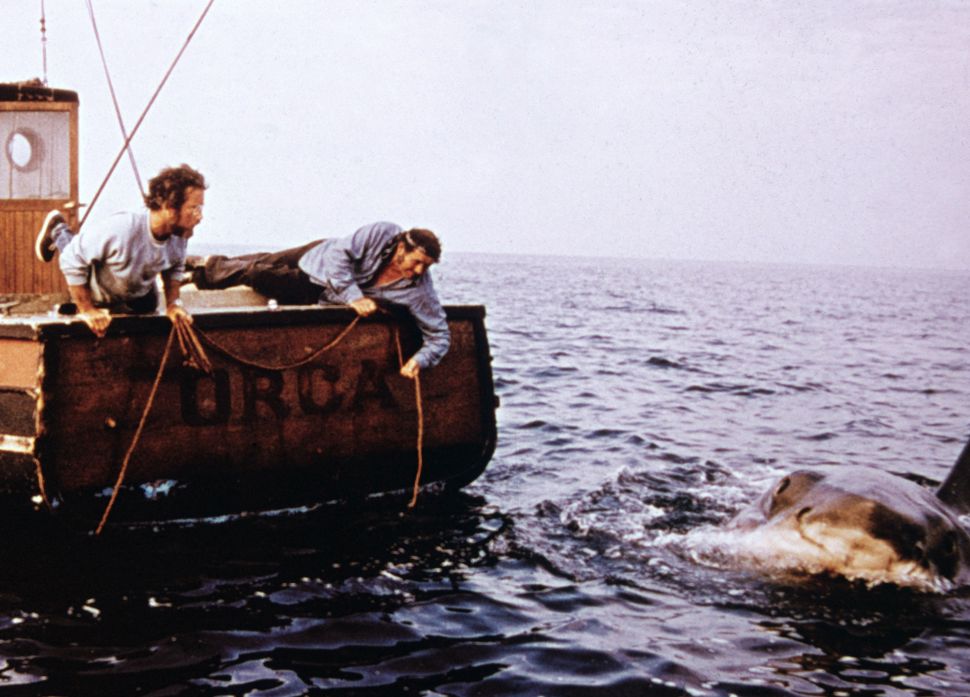 Robert Shaw and Richard Dreyfuss in a scene from 1975’s “Jaws.” Image by Getty Images/Fotos International/Contributor

1974 was among the worst years of Steven Spielberg’s young life. His second feature, “Jaws” ran over time and over budget. The mechanical shark — known to the crew as “Bruce” — kept malfunctioning. Shooting at sea proved more difficult than anyone could imagine. The film’s most bankable actor, Robert Shaw, was often drunk on set and regularly antagonized his younger costar Richard Dreyfuss before takes. For Spielberg, then 27, it must have been a relief to leave Martha’s Vineyard that September after filming there for six long months.

In July of that same summer, in nearby Provincetown, Massachusetts, a teenage girl out walking her dog discovered the body of a woman in a clearing near the sand dunes. The woman appeared to be between 20 and 40 years of age with her hands cut from her wrists and her head nearly severed at the neck. She had died from a blow to the skull, according to police reports from the time, and was in an advanced state of decomposition, although her pink toenail polish remained intact and her auburn hair had stayed put in a pony tail. She was naked, but beneath her battered head were a blue bandana and a pair of Wrangler jeans.

The murdered woman’s identity, like that of her killer, remain a mystery. Locally she is known simply as the Lady in the Dunes.

An adolescent’s discovery of a mutilated corpse feels like a narrative ripped from the pages of a Stephen King book. And King’s son, the novelist Joe Hill, thinks it’s connected to Spielberg’s wretched time filming “Jaws.”

As The Washington Post reports, Hill believes an extra in “Jaws” that appears 54 minutes and two seconds into the film may be the mysterious Lady in the Dunes.

Podcaster Mark Ramsey recently discussed Hill’s theory on his podcast “Inside Jaws,” which details the tumultuous making of Spielberg’s summer blockbuster. But the hypothesis was first recorded on Hill’s Tumblr in 2015, the year of the 40th anniversary of the theatrical release of “Jaws.”

At the time, Hill — who, like his father, is the author of strange and spooky fiction — was reading Deborah Halber’s 2014 book “The Skeleton Crew: How Amateur Sleuths Are Solving America’s Coldest Cases.” The Post reports that Halber’s book was inspired by a 2010 forensic reconstruction of the face of the Lady in the Dunes published in the Boston Globe, and refers to her murder as “the Holy Grail for amateur sleuths.”

Hill, a New England native, was transfixed by the unknown victim’s fate and launched into some amateur sleuthing of his own, poring over the painting-like composite of the Lady on Wikipedia. A short time later, Hill took his three sons to an anniversary screening of “Jaws” at a theater in Newington, New Hampshire. That’s when he saw her.

She was wearing a blue bandana and jeans, and her face resembled the high-tech recreation he had seen earlier.

“I felt I had seen ‘Lady of the Dunes,’ that her face had come up out of the crowd at me,” Hill told The Post.

But, she was gone in an instant. That same evening Hill tried to isolate the frame with the suspected Lady on his laptop, The Post reports, but the picture was too grainy. He was going to need a bigger screen.

Hill consulted a friend in the FBI, who encouraged him to post the theory online. Later, Hill was able to get the frame he needed and approached the Provincetown Police Department, which appeared less enthusiastic.

Still, stranger things have happened, an officer on the case later told Hill. He hasn’t given up hope.

“I’ve heard it said that everyone who was out on Cape Cod in the summer of 1974 appears in the movie ‘Jaws,’ ” Hill told The Post. “I’m sure that’s an exaggeration, but there’s a nugget of truth. People knew there were movie stars on Martha’s Vineyard. The possibility that a person would make a stop on the island and appear in the movie is not unreasonable.”

If the woman in the blue bandana is the Lady of the Dunes, Hill thinks one or more of the people surrounding her in the crowd shot might remember something that tips the case towards a resolution.

“Two astonishing things happened on Cape Cod in the summer of 1974,” he told The Post. “One is that Steven Spielberg filmed ‘Jaws,’ and other is that someone murdered this woman in the dunes outside Provincetown and got away with it. Anything that stirs people’s memories could potentially be productive.”