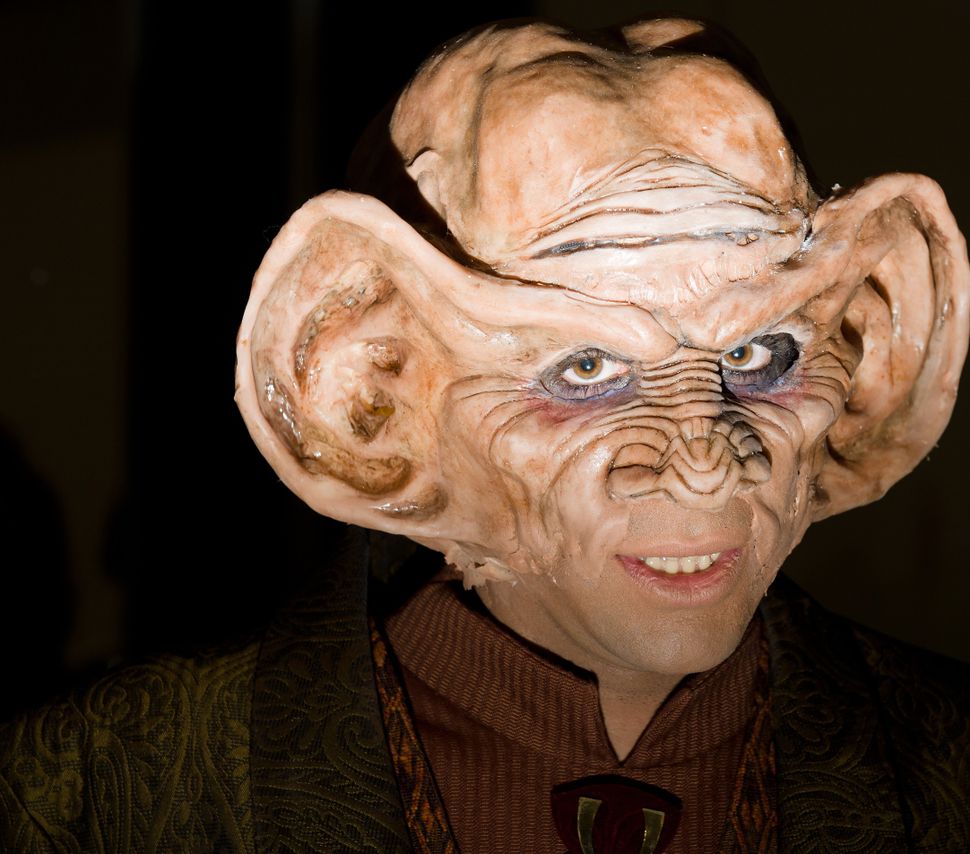 Someone in a “Star Trek” Ferengi costume at London’s ExCel centre on October 19, 2012. Image by AFP/Getty Images

Science fiction universes ought to aspire to “Star Trek’s” charge to “explore strange new worlds, to seek out new life and new civilizations, to boldly go where no man has gone before.” So why do so many works of sci-fi seem content to timidly remain with the same ugly stereotypes we have here on earth?

In an August 14 Perspective piece for The Washington Post, Paul B. Sturtevant lamented a new — if too familiar — species of alien introduced to the video game “No Man’s Sky,” a sprawling, open-world adventure game known for its near-infinite universe and innumerable creatures. The aliens, known as the Gek, are what Sturtevant calls “space Jews.” (One is reminded of Mel Brooks’ teased sequel to “History of The World Part 1,” and its promise of “Jews in Space.”)

Sturtevant writes that the Gek, “a species of short, hooknosed humanoid creatures with shrill voices — and sometimes hats and glasses” are rendered as “scheming capitalists.” He argues the stumpy aliens are yet another addition to a growing library of anti-Semitic tropes disguised as extraterrestrial taxonomy.

Of course, Sturtevant is right. Sci-fi does have an anti-Semitism problem. For those that remain unconvinced I’ll cite his own examples: “Star Trek’s” Ferengi (lucre-obsessed types with big ears and noses courtesy of a “Der Sturmer” cartoon), Tolkien’s dwarfs (stout, bearded and into dragon gold) and “Star Wars”’ Watto (a stubbly, large-proboscised bug man who speaks with a Slavic accent and trades in junk and slaves). I’ll also add one of my own from “Valerian and The City of A Thousand Planets” — Doghan Daguis, a trio of long-snouted nuisances who interrupt the action to sell the protagonists information and quibble over its going rate.

Sturtevant, a medievalist, sees his examples (and would likely see my own) as a tired rehash of anti-Jew sentiment dating back to medieval times, when the chosen people were the only game in town for money-lending. But he also glosses over a larger issue with speculative fiction, as well as some of its more stellar contributions to representation.

To begin with, Jews are far from the only minority group to get a raw deal from sci-fi authors and directors. There is perhaps no worse hate crime in the genre’s recent history than the embarrassing minstrel show that is Jar Jar Binks, a Caribbean-inspired klutz from “Star Wars: Episode 1” who speaks in pidgin and bungles his way into becoming a war hero. Not to give George Lucas too hard a time, but the Neimoidians from the same franchise are almost as bad. With their capacious robes and eastern-style hats, they’re an obvious stand-in for pre-millennium Asian capitalists. They run the Trade Federation and speak in an accent that sounds lifted from Mickey Rooney in “Breakfast at Tiffany’s.”

“Star Trek” has a better record on race, but still stumbled into ill-executed, if well-meaning social commentary. In the 1969 episode “Let This Be Your Last Battlefield” they executed (half)-blackface to comment on apartheid, using an alien race that is split down the middle, white on one side black on the other. Star-bellied Sneetch style, these aliens hate their counterparts whose colors are reversed. Of course this gaffe doesn’t take away from television’s first interracial kiss, the show’s prominent casting of George Takei, a Japanese American or, for that matter, its proud assimilation of Jewish culture.

However horrendous the Ferengi are — and they’re pretty awful — many forget their noble equivalents, the Bajorans. The Bajorans are a displaced tech-savvy species who have been compared to Jews in the Diaspora or modern Israelis (though more recently people have made the case for this advanced race serving as a Palestinian analogue). But even more important than the Bajorans are the Vulcans.

Thanks to Leonard Nimoy’s Jewish upbringing, Vulcans salute the cabin crew with a V-shaped hand symbol that resembles the spread fingers of the Kohanim blessing their congregation. Any time Trekkies make the gesture, and they’re wont to, they’re paying homage to this legacy. And how can we forget that William Shatner, our first Starfleet captain, is a Jew through-and-through? Though I won’t go so far as to say impressions of his stilted line readings amount to a tribute to our people.

But for all these examples, good or bad, a trend is visible. Mainstream sci-fi continues to fall back on the same problematic and shopworn archetypes known to earthlings when it should be looking to the stars, stretching our conception of what’s possible both in character and social dynamics.

Ultimately, the worst crime of any alien minstrel show is a lack of imagination in a space that should be a bastion of new — never final — frontiers in creative thought.