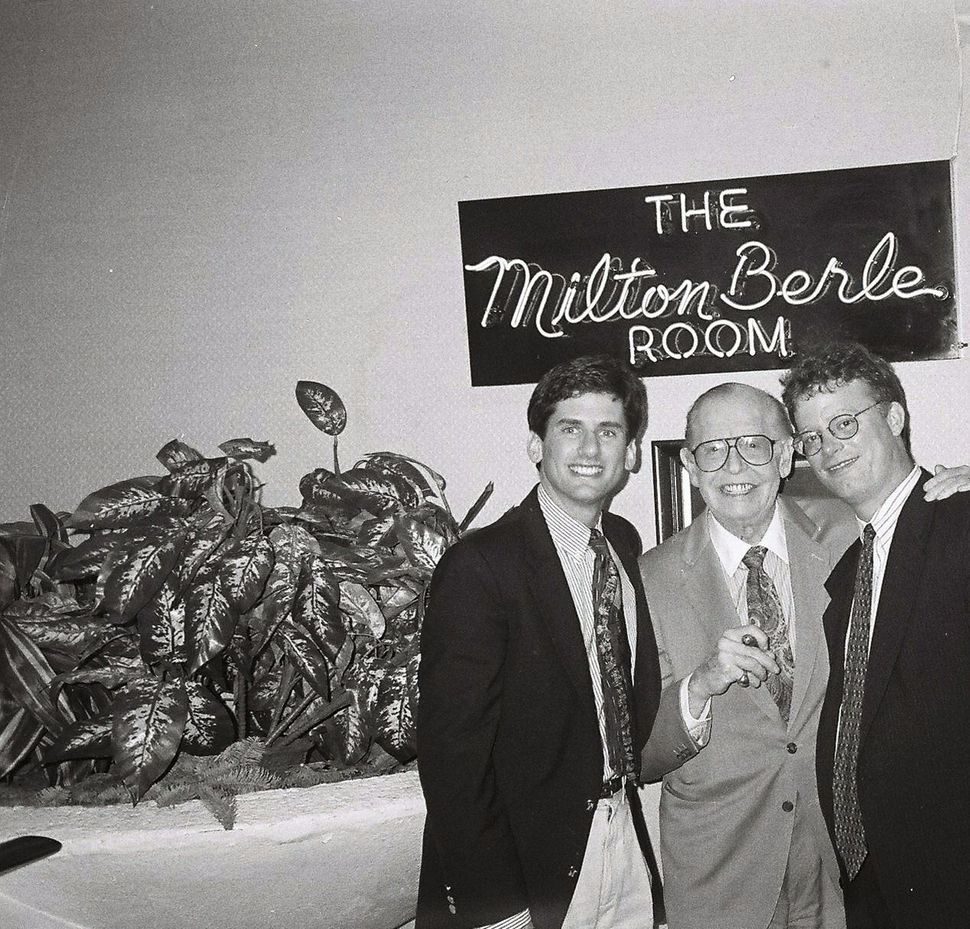 40 years ago David Fantle and his writing partner, Tom Johnson, saved up enough money from their summer jobs to fly to Los Angeles for interviews with Fred Astaire and Gene Kelly. They were 18-years-old Minnesotans with no credentials other than chutzpah and a love for Golden Age cinema. They had never done anything like it before and all it took was a snail mail request for sit downs with the two titans of cinematic dance.

“We couldn’t rent a car, we stayed at a hotel that was about $27 a night,” Fantle told the Forward. “We went out there and we had these transformational visits with Astaire and Kelly. Kelly was at his home,.Astaire was at his business manager’s office and we had our photo taken with Fred Astaire. (Kelly did not consent to a photo at his home in Beverly Hills). And it was sort of our Willy Wonka golden ticket. Because Astaire and Kelly were so universally revered, as they are now, if you sent that photo with Astaire, [other artists] were probably saying ‘Gosh, if Fred will see you guys, we will.’” 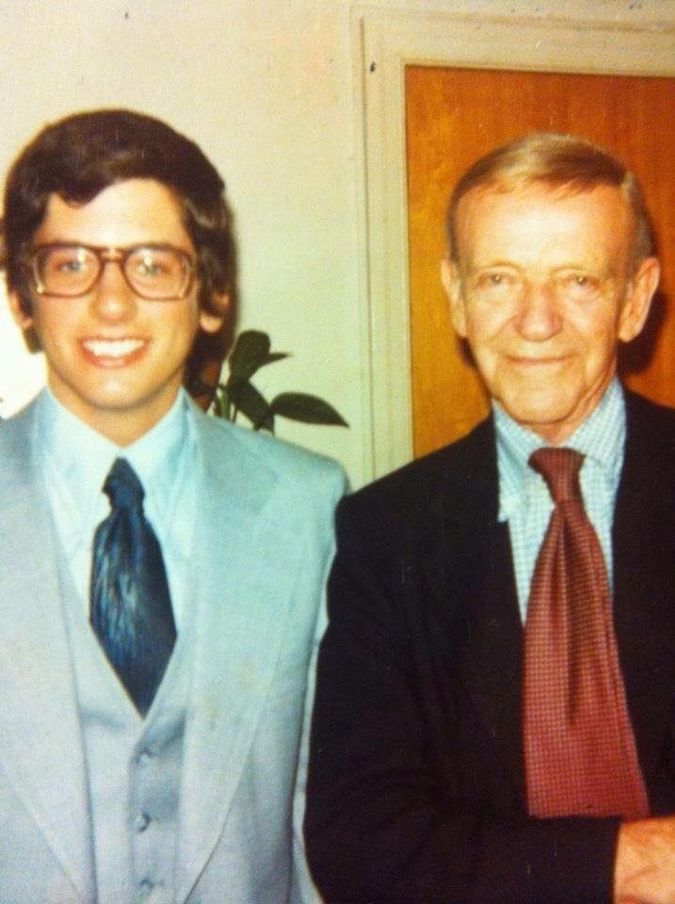 Astaire’s lissome touch opened the door to over 200 interviews with studio system era actors, comedians, directors, writers and composers. The result of Fantle and Johnson’s 40-year endeavor is a book, “Hollywood Heyday,” a collection of 75 unvarnished A-to-C-Lister profiles. Fantle now works in marketing for a non-profit in Milwaukee and is an adjunct professor of film at Marquette University, and the LA-based Johnson is a writer and editor who was employee 112 at Netflix and now does freelance work. The pair followed Gene Kelly’s advice to “not quit their day jobs,” but kept interviewing as a “part-time vocation” up to the mid-90s. During their own interviewing heyday, the twosome got into some interesting situations with recognizable names.

“We kidnapped [Frank] Capra,” Fantle remembers. During a festival event in Minneapolis in 1981, the two upstart interviewers spirited the “It’s A Wonderful Life” director away from his hotel and his full schedule to show him the Mississippi River (he was a willing captive). “Here he was 83-years-old, the Mark Twain of filmmakers and we were the first ones to ever show him Twain’s river.”

Fantle and Johnson’s affinity for old films began when they were 14, when they saw the 1974 MGM musical retrospective film, “That’s Entertainment!” Borrowing an old projector from the St. Paul JCC, they managed to rent old 16 millimeter prints and, as a way of viewing the films and defraying their costs began screening them at nursing homes in the Twin Cities areas (among them the Shalom Home). Fantle, who is Jewish, took a special pride in interviewing the book’s many Jewish subjects, which make up about a third of its subjects. When the Forward spoke to him in a Chelsea coffee shop over Labor Day weekend he enumerated many of their quirks.

George Burns was a still-sharp elder statesman (“He smoked 10 stogies a day … toward the end of his life Hillcrest Country Club enacted a no smoking policy. But then there was an outcry because of their most venerated member, George Burns. So they grandfathered him in by saying “no smoking for anyone under 95”). Julius Epstein, one of the screenwriters on “Casablanca” was a crank who disowned the film (“He said it was ‘camp.’ He said ‘why would I be proud of camp?’”) And Jack Carter was full of sour grapes and a bit paranoid (“Here was a guy that in the ‘60s and ‘70s was on the Dean Martin roasts and all over and he tells us this story about Johnny Carson being anti-Semitic!”) 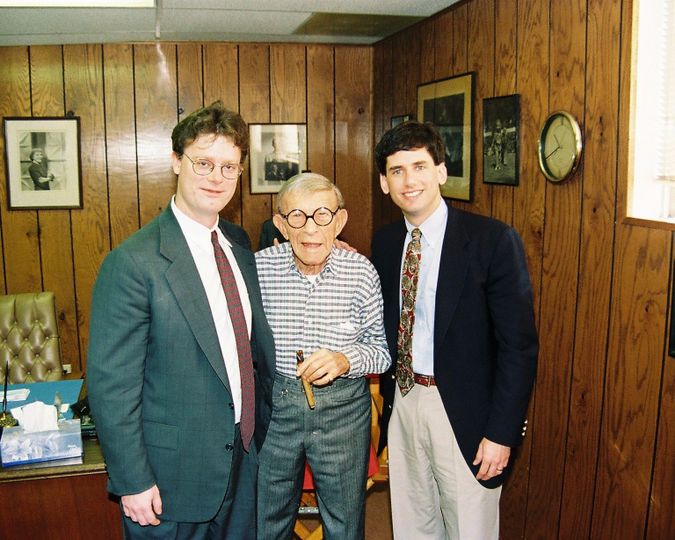 In the book Milton Berle tells them a dirty joke, Ed Asner talks liberal politics and Tony Curtis draws them an expressionistic picture. But maybe their most surprising face-to-face encounter was with Lucille Ball, who was far from a laugh riot.

“People are always fascinated that she was so unfunny. And again, she broke the glass ceiling she was one of the first women, if not the first woman mogul in television. What she did on the sitcom was basically act and perform and read lines. She said ‘we didn’t ad lib’ and she was busy tending to a growing business that became Desilu Productions, so she was all business.“

Another surprise was the candor they managed to eke out of Bob Hope, a man notorious for his scripted answers. “When Reagan had been shot, he came out and told us on-the-record he didn’t understand why we don’t have stricter gun control laws which, I think was sort of out-of-character for him to even address something that serious.”

Fantle acknowledges that he and Johnson had youth on their side and that most of the studio system stars they sought out were groomed more for extensive press than the celebrities of today who typically do the rounds on junkets and late night talk shows. But one of the most recent interviews in the collection proved to be a difficult get: composer Andre Previn, who they spoke to in 2016 in his Manhattan apartment.

“He left Hollywood in the mid-60s never to return and it took me a lot of prodding with him on the phone to actually consent to me actually coming over. It was a couple of hours and then he was fine,” Fantle said. “He was very opinionated. He equated Cecil Beaton to Donald Trump!”

For Fantle, Previn brings the book, a survey of 20th Century pop culture, into the present. Fantle and Johnson hope their work resonates with both older and newer generations and will wrap up their press tour at the 92nd Street Y on October 15 at noon in an event moderated by Dick Cavett.

If you can’t make it and are wondering how Fantle and Johnson’s first interview subjects compare, a running theme throughout the book, Fantle summed it up nicely: “Astaire did not want to dissect his work. He loved the horses and the horse-racing and he lived for the moment. He liked John Travolta in “Saturday Night Fever,” he was very contemporary. He was friends with Michael Jackson, whereas Kelly was more of an auteur, because he was a director. Kelly would be a patron of the arts — college-educated, LA. He would like to go out and support and be a mentor to young artists.”

Of course, by agreeing to a photo-op Astaire was the one who paved the way for Fantle and Johnson. Kelly just sent them Christmas cards for fifteen years.