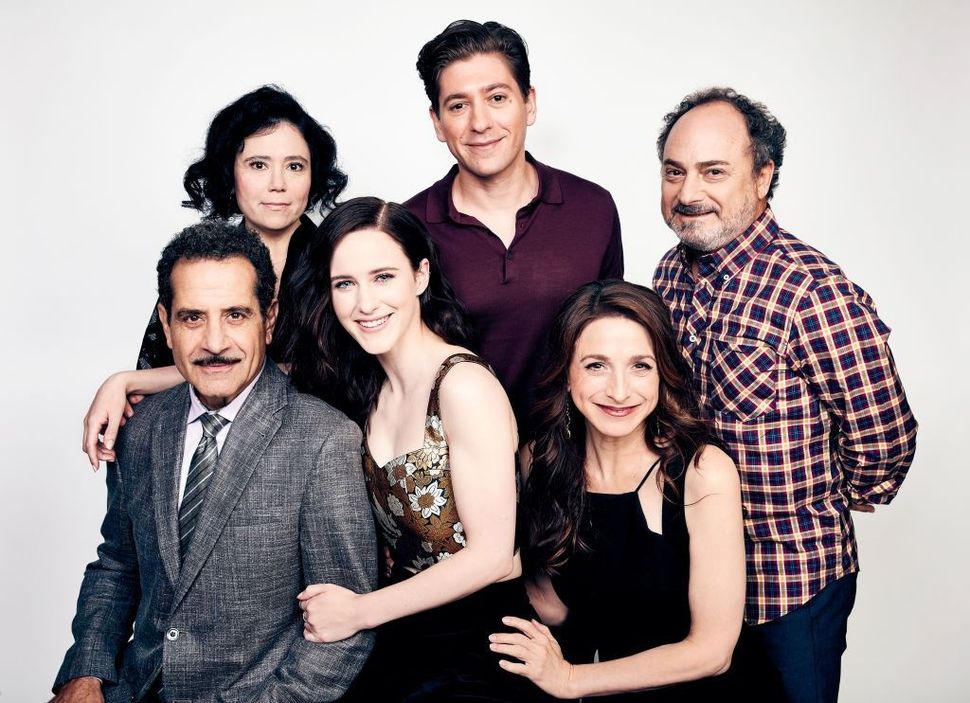 The stars of Amazon’s ‘The Marvelous Mrs. Maisel’ Image by Getty Images

Oy vey! We had to wipe a little shmutz off our tchotchkes, but you better bissel–gornisht–treyf believe it — the second season of Amazon Prime’s smash-hit show “The Marvelous Mrs. Maisel” is just as bagel as ever. Jews!

If you enjoy the tempo of crack-cocaine addicts, or podcasts played at 2x speed, you will enjoy the second season of “The Marvelous Mrs. Maisel.”

If your dream television program is a highly produced TV musical where the characters never actually break into song or dance, approaching but never arriving at musical numbers like a kinkster practicing sexual edging, you will enjoy the second season of “The Marvelous Mrs. Maisel.”

If you wish to experience 1950s Manhattan as it would have looked if it was a soundstage maintained by an elite squadron of housecleaners, you will enjoy the second season of “The Marvelous Mrs. Maisel.”

If you want to watch prestige television that purports to make its subject female liberation, but in fact ignores the status of women who are not white, wealthy, straight, and cisgendered, you will enjoy the second season of “The Marvelous Mrs. Maisel.”

Many Jews and non-Jews do. It’s pure, lovely fantasy: Historically iffy, emotionally breathtaking, and vague in its Judaism. It’s “Fiddler on the Roof” for the streaming age, in that it reflects a beloved mythology of a certain time of Jewish peoplehood. And that’s perfectly wonderful. We have every right to tell ourselves our own, dubious narrative of our past and get a kick out of our telling. It’s what we’ve been doing all along.

The whole gang is back in the first five episodes of the second season of “Maisel” that were released to critics ahead of the season premiere on December 5. It’s a joyful ensemble, crowded with talent. Returning to her Emmy and Golden Globe-winning role, the marvelous Mrs. Rachel Brosnahan still has glass-like skin, a waist small enough to feel like a personal attack, impeccable locution, and a standup routine like a patient throwing jokes at her therapist to avoid emotional vulnerability. Tony Shalhoub, as her father, Abe, is still a neurotic lion-cub of a man, and her mother, Rose, played by Marin Hinkle, is even more gorgeously grounded this time around.

Her ex, Michael Zegen, is still a greased-up little punk. And Alex Borstein, whose turn as downtown comedy manager Susie Meyerson earned her an Emmy, is perfect. She develops a heartfelt, layered relationship with an inanimate object that had me rooting for their longterm happiness (it’s a mop.) The effect of dialogue by Amy Sherman-Palladino, the creator of “Gilmore Girls,” and “Younger,” is that characters possess similar qualities — they’re frenetic, neurotic, and self-focused, but only able to express thoughts in patter-form. Since no character pauses to take in any other’s words, it’s hard to believe anyone is communicating. Additionally, almost all of the actors, leading and ensemble, have accents that recall the orphans in “Annie.” If you can look past these flaws, the whole thing is delightful and sometimes stirring.

As the season opens, the madcap Upper West Side crew jets off to Paris for an endearing storyline that deepens Abe and Rose’s characters, then back to Manhattan, where Midge struggles adorably as a switchboard operator by day and a comic trying to get booked by night. But the full aesthetic and wittily nostalgic powers of “Maisel” are realized when the whole family, along with Joel and his parents, a much shrewder take on the Costanza elders of “Seinfeld,” decamp to the Catskills, “the land of canoes and knishes,” and Susie puts it, for the summer.

At the Catskills resort — half paradise, half unending family brunch — Sherman-Palladino finally builds real tension between Midge’s life as a society Jew and as a comic. She also introduces a strapping love interest for Midge (Zachary Levi) just as we’re itching for her to like someone other than that dolesome whiner Joel. But the conflict that pursues Midge and Susie is identical to that of last season — not whether Midge can make it as a comedian who is a woman, but whether Midge can make it as a comedian who is a beautiful woman. Ah yes, being too hot to be funny — the great social justice struggle of the late 1950s! It might help Midge breathe a sigh of relief to know that ever since Joan Rivers, the majority of female comedians, from Tina Fey to Jessica Williams to Iliza Shlesinger, are expected to be gorgeous as well as funny. But it doesn’t make this plot point more meaningful. Instead, like Rose jetting off to Paris to liberate herself from the despair of aging as a housewife, or Joel, seizing the reins of his parents’ business when he’s out of a job, it merely seems privileged.

Nothing wrong with indulging in fantasies of privileged fixes. It’s just more escapist than stimulating.

The perfectly hewn cliff-hanger at the halfway point of the season: how will Midge defend her new identity to her high-strung parents?

We bet she’ll work it out — she’s marvelous. It’s not much of a nail-biter, but that would just ruin our manicures anyway.